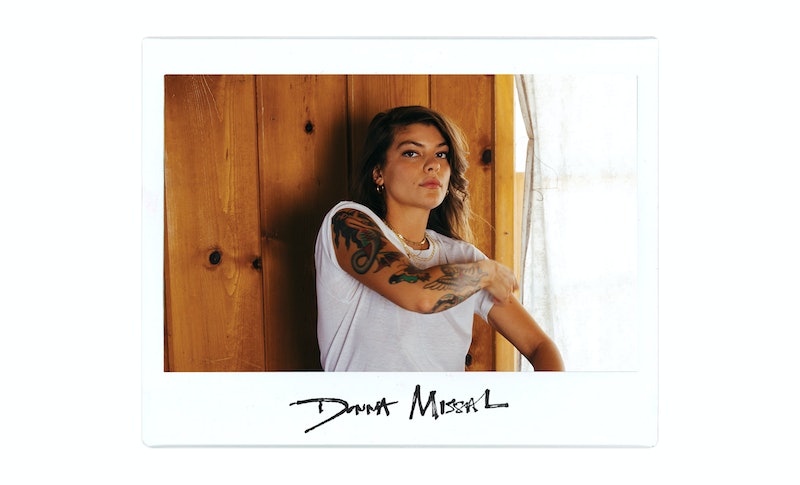 For Bustle UK's music issue, Noisemakers, we wanted to spotlight the new talent you're destined to find on your playlist in the next 12 months, as well as the industry heavy hitters you know and love. Bustle UK's social media editor (and all-round music super-fan) Charlie Mock scoured the scene to find the finest up-and-coming artists to take on the Bustle Booth. Read on to find out how "Jupiter" singer Donna Missal left her mark.

Donna Missal was always going to use her voice: she tells Bustle, "I can’t imagine my life without singing. I think it can sound disingenuous but it really is a part of my soul." But that career could have gone very differently; as a teenager, the singer aspired to be on Broadway.

Instead, the New Jersey artist turned her rich, singular vocals and songwriting candour to her debut album, 2018’s This Time. The record boasts co-writing credits from indie idol Sharon Van Etten and production from Tim Anderson, who’s worked with Solange, Halsey, and BANKS.

In January, Missal performed her visceral breakthrough single, "Keep Lying," on Late Night with Seth Meyers, while she’s also opened for both King Princess and Bishop Briggs on tour. Even before This Time’s release, Missal was making her name, featuring on tracks by Rudimental and The Martinez Brothers as well as Macklemore.

In February, Missal released the video for her latest single "Jupiter," which she directed herself. Immediately afterwards, she launched a 20-date North American headline tour; later this month, she’ll play the Bonnaroo music festival in Tennessee. She won’t be slowing down afterwards, though: her second album is in the works. (Her dream collaborators? "Rosalía, Mitski, Kendrick Lamar, Leon Bridges." Is it too early to pre-order?)

Success, Missal says, didn’t come overnight. "I’ve been writing and singing since I was a little kid so it’s always been there, but for a long time I was singing in bands while bartending," she says. "I’d take the day shift and make less money so I could rehearse and play shows at night."

The biggest obstacle she’s surmounted? "Getting over myself and my own self-doubt," she says. "I think rather than one big challenge, it’s felt like a million small challenges that built up into something that could feel impossible at times. Like every time I had a setback or I’d be discouraged to do this, it would feed that feeling of doubt. I think learning how to persevere was the challenge that made the difference."

Missal takes her inspiration from the greatest — Billie Holiday, Nina Simone, Björk, Janis Carole King, Janis Joplin — telling Bustle, “I most admire the women who have made it possible for other women to be valued for talent, ability, strength, point of view, creativity and power.” And she's got quite the playlist going, too: "This summer I'll have Shania Twain, Sheryl Crow, Oasis, and Nirvana on heavy rotation," she says.

With influences like that, it's likely Missal's second album will be even more compelling than her debut. Want to get to know her better first? Check out her answers in the Bustle Booth below.