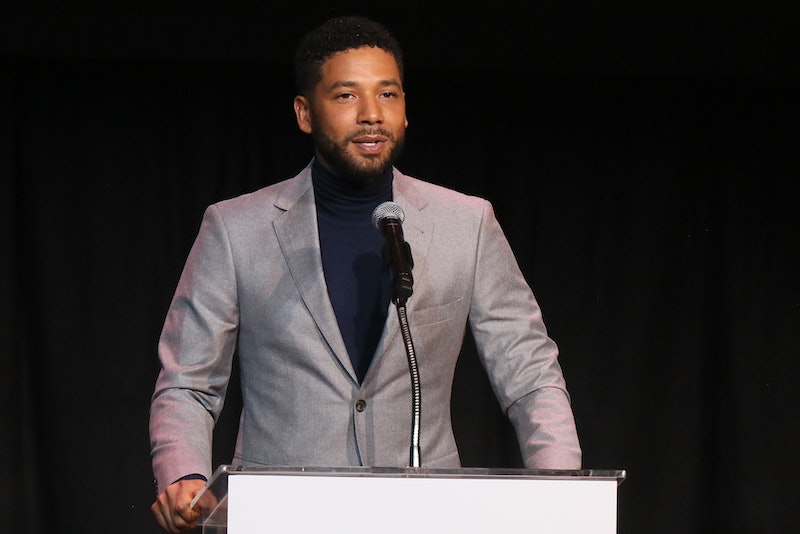 Days after the star of the hit show Empire was brutally assaulted by two assailants, Jussie Smollett spoke out about the attack for the first time. "Let me start by saying that I'm OK," Smollett said in a statement to Essence. "My body is strong but my soul is stronger." The actor also said he needs "a moment to process," and that he believes "justice will be served."

Smollett was attacked on Tuesday morning while he was walking in downtown Chicago. According to the city police department, two men in masks yelled homophobic and racial slurs as they approached him on the street. They beat him, drenched him with an "unknown chemical substance," put a rope around his neck, and fled the scene. Police say they are investigating the incident and may ultimately label it a hate crime. Smollett is black and is openly gay; he publicly came out on the Ellen DeGeneres show in 2015.

"I am working with authorities and have been 100% factual and consistent on every level," Smollett said in his Friday statement to Essence. "Despite my frustrations and deep concern with certain inaccuracies and misrepresentations that have been spread, I still believe that justice will be served."

Smollett has been recovering at home since the attack, according to the Associated Press. He'd declined to speak publicly about it until Friday, though his family released a statement on Thursday condemning the "racial and homophobic hate crime." Investigators have been working to piece together more information about the assault, including by reviewing extensive surveillance footage that shows Smollett before and after it occurred. They have not yet found video of the actual assault, per the AP.

"These types of cowardly attacks are happening to my sisters, brothers and non-gender conforming siblings daily," Smollett told Essence on Friday. "I am not and should not be looked upon as an isolated incident. We will talk soon and I will address all details of this horrific incident, but I need a moment to process."

Reports of hate crimes increased by 17 percent between 2016 and 2017, per a recent Uniform Crime Reporting Program analysis.

TMZ has reported that the men who attacked Smollett shouted "MAGA country!" when they ran away. Variety reported Thursday that Smollett told police the assailants said "MAGA country" during the attack as well.

NAACP President Derrick Johnson issued a statement after the assault declaring, "The recent racist and homophobic attack on acclaimed actor and activist Jussie Smollett is troubling," and added: "The rise in hate crimes is directly linked to President Donald J. Trump's racist and xenophobic rhetoric." TMZ also reported that the actor received a letter containing a death threat a week before the attack.

Celebrities and lawmakers around the country have condemned Smollett's assault this week and posted messages of support for the actor. "I want to say thank you," Smollett said in his Friday statement to Essence. "The outpouring of love and support from my village has meant more than I will ever be able to truly put into words."

"Most importantly, during times of trauma, grief and pain, there is still a responsibility to lead with love," the actor said. "It's all I know. And that can't be kicked out of me."

More like this
Courteney Cox Doesn't Remember Filming 'Friends'
By Jordyn Tilchen and Sam Ramsden
Which Cast Member of 'Westworld' Season 4 Has the Highest Net Worth?
By Meg Walters
What Is Ben Affleck's Net Worth? At 50, The Oscar Winner Makes 8 Figures Per Film
By Meg Walters
Emma Mackey *Is* Emily Brontë In The First Trailer Of The Biopic
By L'Oréal Blackett and Sam Ramsden
Get Even More From Bustle — Sign Up For The Newsletter