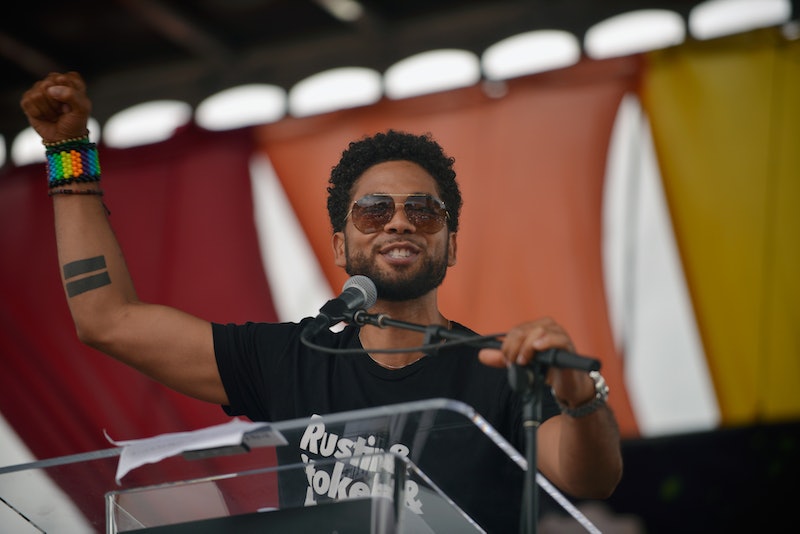 In this op-ed, writer Nylah Burton explains how the brutal attack against actor Jussie Smollett targeted him both for his multiply marginalized identity as a Black, Jewish, gay man and his visibility. A warning: This piece contains descriptions of racial violence that some may find triggering.

People often perceive fame and recognition to be a form of privilege that insulates celebrities and other powerful people from injustice. But for certain stars — especially out, Black queer ones — that isn’t true. This week, Jussie Smollett was targeted for his identity as a Black queer man. He was also targeted precisely because of his fame and visibility.

Early Tuesday morning, Smollett was attacked by two men wearing ski masks, who reportedly poured a chemical substance on him and put a rope around his neck. Smollett told Chicago police that he believed the chemical substance may have been bleach, Forbes reported, and that the assailants had yelled “MAGA Country,” referring to one of President Donald Trump’s campaign slogans.

Given events that have happened in the past couple of years, people have begun to associate “Make America Great Again” with acts of racism. Some writers and activists, such as including Alyssa Milano, have even posited that MAGA hats are just as much a symbol of racism as the white hoods of the Klu Klux Klan.

Police have said they are investigating Smollett's brutal attack as a possible hate crime. According to data from the FBI, since Trump’s election, the number of hate crimes in America has risen, increasing by 17 percent in 2017. As CNN reported, while there are many different motivations for hate crimes, often attackers are not only focused on hurting an individual, but also want to instill fear in an entire group of people that share the individual’s identity.

By reportedly using homophobic and anti-Black slurs, Smollett’s attackers likely meant to send a threatening message to the Black and gay communities. His celebrity and visibility ensured that the attack — which Sens. Kamala Harris and Cory Booker described as a “modern-day lynching” — would capture the country's horrified attention.

For LGBTQ individuals and people of color, America has always been at least partially defined by how it has legalized and normalized attacks on identity. Consider the government-sponsored racial terror of the Jim Crow era, the lethal apathy of Ronald Reagan’s administration during the HIV/AIDS crisis, and Trump's ban on transgender people in the military.

When you’re part of a marginalized group, visibility is dangerous, no matter what privileges you’ve attained.

Partly because of the widespread normalization of racism and the role that our government systems play in perpetuating it, most hate crimes go unreported. Black trans women experience horrifying levels of violence that the media often fails to report as an urgent crisis. Black women are unlikely to report sexual violence against them. All this indicates that people who are attacked for the intersection of their race, gender, and sexuality often fear either that they won’t be believed, or that police interactions will re-traumatize them.

American society has normalized and ignored the violence that happens to “regular people," so there are still some individuals who are surprised that people with record deals, acting credits, or even a blue check mark by their Twitter username could experience such violent hate. But it’s not a rarity. In 2016, Saturday Night Live cast member Leslie Jones’ website was hacked; the attackers posted her driver’s license and stolen nude photographs of her. Some called this “harassment,” but others pointed to it as a hate crime against a successful Black woman whose starring role in a Ghostbusters reboot had attracted criticism. Kelly Marie Tran, the first woman of color to have a leading role in a Star Wars film, faced a lot of backlash online last summer and said she started to internalize the hateful things people were saying about her. It was Jones' and Tran's identities, as well as their celebrity, that made them vulnerable.

In the Fox drama Empire, Smollett plays Jamal, a gay character who struggles with homophobia among his family and in the wider Black community. It was a groundbreaking role that explored the intersections of race and sexuality, and Smollett, like his character, has used his voice and platform to shed light on injustice. But as Smollett broke down those barriers, he became more of a target himself.

Being visible is dangerous when you’re part of a marginalized group, no matter what privileges you’ve secured. What happened to Smollett is a prime example of why it’s so important for everyone to use an intersectional lens when we talk about oppression and identity-based violence — especially in the age of Trump, when it feels like so many of us are being attacked for simply existing.

Celebrity won't protect marginalized people from hate, and often, visibility is dangerous. Our eyes need to be wide open to the fact that hate crimes are a reality for people of color and LGBTQ folks, and especially for people who identify both as people of color and LGBTQ. When a black queer celebrity is attacked in a "possible hate crime," that's not a shocking anomaly: It's a powerful reminder of just how vulnerable marginalized groups are.

Editor's note: If you or someone you know is triggered by the news about this brutal attack, you can text HOME to the Crisis Text Line at 741741. You can also find more resources here.