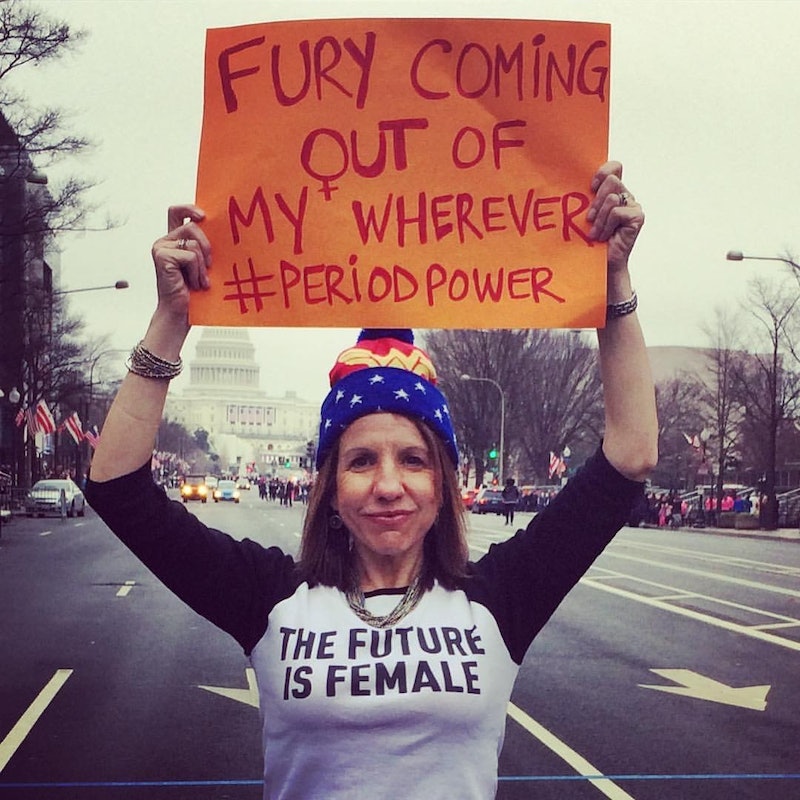 When it comes to issues related to women's autonomy over their own bodies — like abortion access, contraception coverage, Planned Parenthood funding — Democrats and Republicans typically clash. There is a rare bipartisan exception, though, over the tampon tax, the extra sales tax on menstrual products in different states throughout the country.

While specific food, drugs, medicine, and other items considered to be necessities are often exempted from sales taxes in different states, menstrual products, including tampons, have regularly been taxed. At one point, 40 of the 50 states taxed tampons and other menstrual products. In contrast, as Vogue noted in a March 2016 article, some medical items traditionally considered for men, like Rogaine and Viagra, are often tax-exempt.

It was this realization that pushed Jennifer Weiss-Wolf, the vice president for development at the Brennan Center for Justice, to petition against the tampon tax and bring it forward as a national discussion. So, in December 2015, Weiss-Wolf teamed up with Cosmopolitan to launch a Change.org petition and get the conversation off the ground.

"I basically had to spearhead 40 different campaigns for the 40 different states that had sales tax on menstrual products. I had to still raise the alarm and make it a national dialogue and national discussion," Weiss-Wolf tells Bustle. "That was very purposeful. If you just went to the statehouses individually, and there wasn't the larger discussion, they might not actually bother to do it."

After fighting to repeal New York's tampon tax in 2016, she helped launch campaigns in the remaining states with tampon taxes. The Tax Foundation noted that, overall, at least 13 states introduced proposals to get rid of the tax in 2016 alone, and New York, Connecticut, Illinois, and the District of Columbia instituted the exemption. The most recent state to get rid of the tax was Florida, where Republican Gov. Rick Scott signed the proposal into law.

Florida, more than any other of these states, may best prove Weiss-Wolf's argument that there is uniquely strong bipartisan support to get rid of the tampon tax.

"What was exceptionally promising about these laws ... was the bipartisan support for these bills," she says. "This is one of the very few places where we seem to have common ground with conservatives who don't otherwise show much concern, empathy or interest in women's bodies."

While the campaign received support from both Democrat and Republican legislators, Weiss-Wolf says it could have easily turned out differently.

"I do think that people take this [bipartisan support] for granted. It was well done which is why it now looks like an easy thing to do," says Weiss-Wolf.

She points to how things were different even just a few years prior to her beginning her campaign "In 2014, the writer Jessica Valenti wrote an op-ed [in The Guardian] that basically made the same points about tampon taxes and she was met with a lot of backlash [from Republicans]."

Weis-Wolf says she isn't sure what caused the change that led to both parties supporting the anti-tampon tax effort. "I joke that Republicans had to decide who they hate more, taxes or women — and they chose taxes," she says.

In fact, in the very red state of Texas, in December 2016, Republican state Rep. Drew Springer drafted a bill to make menstrual products tax-exempt. While it didn't pass, bipartisan involvement in red states such as Texas leave Weiss-Wolf optimistic.

"In Texas, the bill wasn't passed, but [in] the most unfriendly state for reproductive rights in the country, someone with conservative credentials realized the tampon tax matters," Weiss-Wolf says.

Weiss-Wolf sees this temporary unity on the tampon tax as a window to open up conversation with Republican politicians about reproductive rights.

"Where there's room for discussion or debate that's less polarized than the current reality, then that's hope. Maybe, just maybe, this is a possibility to get Republicans to listen to their female constituents," says Weiss-Wolf.

More like this
How Getting An Abortion Has Changed From The ’60s Through Today
By Amanda Chatel
The UK Abortion Laws In 2022, Explained
By Sophie McEvoy
For These Abortion Clinic Volunteers, Going TikTok Viral Is A Risk Worth Taking
By Audra Heinrichs
Every Single Big & Small Way You Can Fight For Abortion Rights
By Tess Garcia
Get Even More From Bustle — Sign Up For The Newsletter