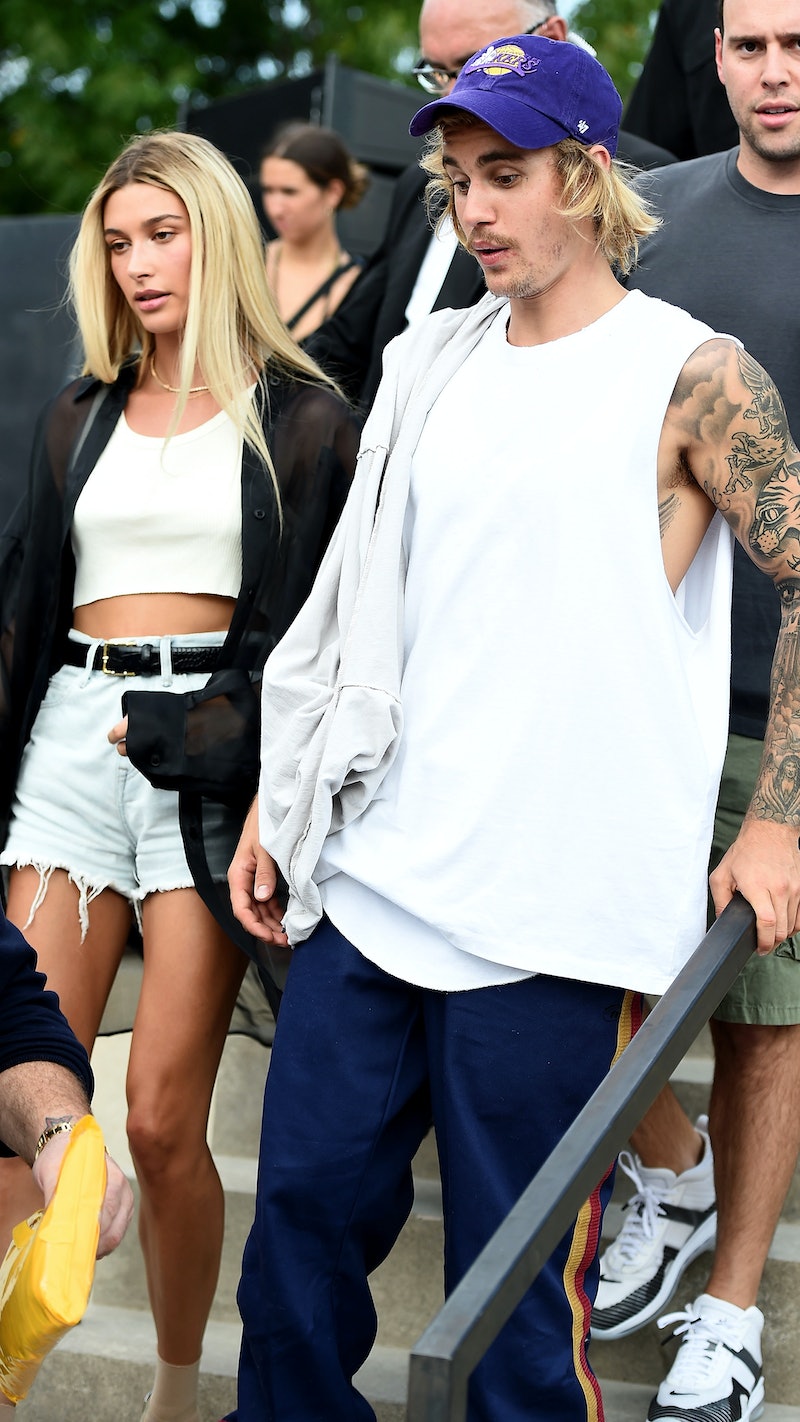 If you’ve just come back from a social media hiatus, then your feeds are probably blasted with the news that Justin Bieber and Hailey Baldwin had their second wedding over the weekend. And despite the couple's prominent status, Justin and Hailey’s wedding bands are something special that even the average American could shell out for their beloved. The Biebers' choice in jewelry proves you don't have to spend your savings to make your special day sparkle.

Exactly a year after they got legally married in a New York City Courthouse, the couple had their official wedding on Sep. 30 at Palmetto Bluff in South Carolina. Despite an influx of paparazzi trying to get snapshots of the festivities, many of the details of the wedding were kept private. However, Justin and Hailey didn’t keep fans in the dark for too long: By Oct. 1 , they had both posted reception photo booth selfies that showed them wearing their wedding drip while loving up on each other.

“Looking forward to forever with you Hailey Bieber,” Justin wrote under one of the wedding photos he uploaded to his Instagram.

In the photo carousel seen on both their IG pages, Justin and Hailey were wearing all white for their wedding close-up, but the rings (and JB’s grill) were the items that were attracting commenters' attention. According to a press release, Tiffany & Co. was the supplier of the Biebers’ wedding bands and accessories. Hailey opted for an 18 karat gold Tiffany Soleste band ring with diamonds that retails for $3,125 as well as the Tiffany Soleste 18 karat V ring (also with diamonds) for $2,150. As for Justin, he matched right along with his wife wearing an 18K gold Tiffany Classic wedding band ring that costs $950. The Biebers' wedding bands are pretty affordable, all things considered. While they could have splurged on something more glamorous, we love that they kept it simple and classic with these Tiffany's bands.

That said, Hailey also sported a pair of platinum diamond earrings from the jewelry brand that are estimated to be over five carats, which are said to be worth $123,000. And we can't forget about her massive diamond engagement ring that TMZ reported cost around $500,000. So while their wedding bands were relatively modest, the rest of her jewels were decidedly not.

Among the list of A-list attendees at the wedding ceremony were Kendall and Kylie Jenner, singer Justine Skye, and Jaden Smith. The couple actually treated their guests with an equal amount of bling of their own. According to People, Justin and Hailey’s guests were gifted custom Moët & Chandon Imperial Brut Champagne bottles dripping in 9,682 Swarovski crystals that allegedly took 16 hours to make. Each bottle read featured the couple's signature wedding logo, "The Biebers 9.30.19" in cursive, sparkly writing.

Regardless of the fact that the wedding and reception are over, the couple isn't finished sharing the exciting news online. After the wedding bands were revealed to the world, Justin Bieber also teased a short clip on Oct. 2 via Instagram with the caption "New music. Wedding music. @danandshay and this guy. Friday." While Bieber kept the details on this new music brief, fans are already excited to hear it. According to the Instagram post, the wedding tunes will be released Oct. 4.

The Biebers have gone out of their way to pick out some stunning jewels and gems not only for themselves, but also for their equally glamorous guests. And even though many of us didn't get an official invite to this exciting moment, at least we'll get to hear the playlist to celebrate the couple's romantic and glamorous nuptials.