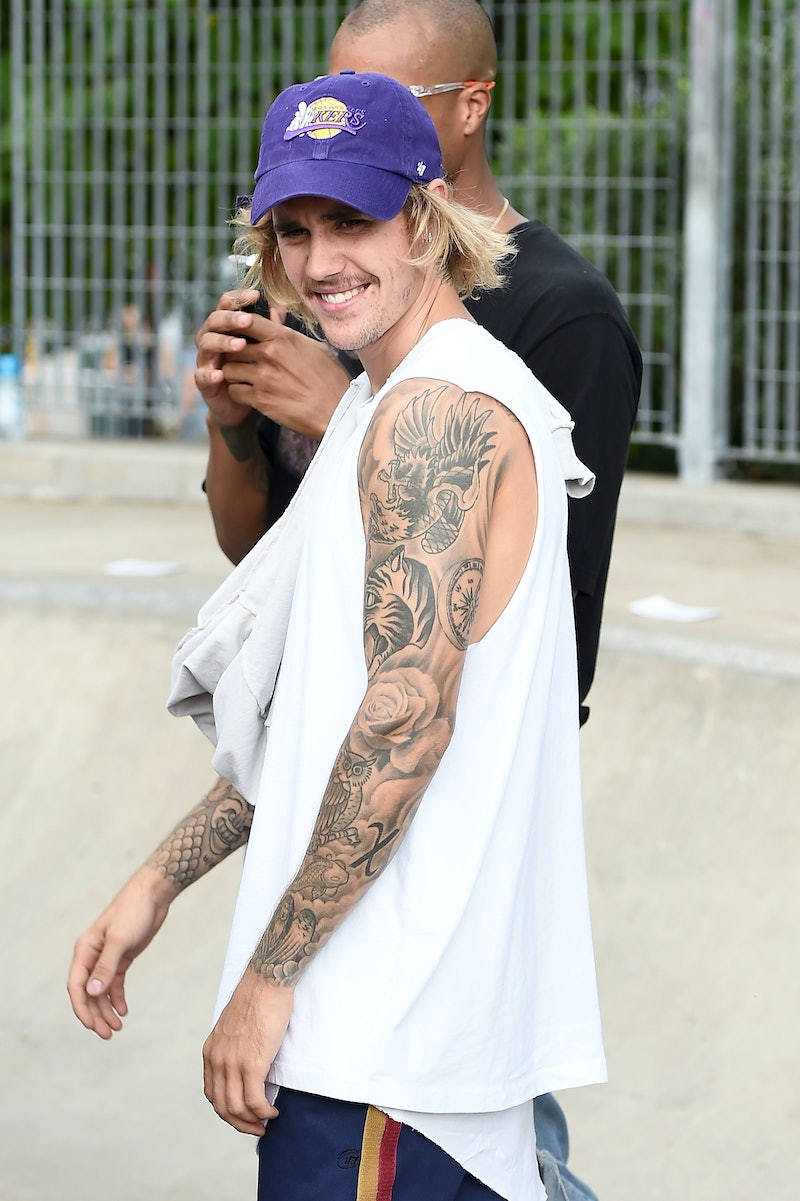 This sounds like a literal design flaw: Justin Bieber was questioned by cops over his sneakers. Wait. What? Why? Bieber revealed via his Instagram story that police officers actually asked him about the plastic tag on his Off-White X Nike Air Max 90 Sneakers because they were concerned that the footwear may have been stolen. Yikes!

As PEOPLE reports, the snazzy kicks were part of a popular collaboration between the sportswear brand and designer Virgil Abloh and they feature a blue zip tie pulled through the laces. The tie is a design detail that doesn't seem to serve any purpose other than to look cool. But to the untrained eye (and perhaps the not-so-sartorially-minded) it sure looks like a security sensor.

Bieber showed off an aerial view of his sneakers and both tagged and addressed the designer in his story. He lamented the situation, saying, "Virgil, my god, bro. You freaking, you're killing me, man. I just had a cop come up to me and ask me why I still have the security tag on my shoe. What the…"

Bieber giggled about his predicament in the next story frame, saying, "I had to tell him, 'Bro, it's just fashion. I don't know.' He's like, 'It sure looks like a security tag.' I was like, 'Nah, bro, you can check it out.' It looks like it though... but you're getting me in trouble!"

The cops are not featured in the story so the incident appears to be recalled strictly from Bieber's memory, as well. This screen shot of the footwear, which matched the singer's beige pants, shows off the tag. It does look like a theft deterrent and is certainly a noticeable contrast to the rest of this monochromatic outfit. Perhaps that's why the cops were quick to notice it.

However, judging from the singer's tone while sharing the details of his exchange with the police, it was all a big fashion misunderstanding. Bieber was probably never in any real trouble with the law over his shoes. However, he might want to think about removing the zip tie so that he's not hassled any further by other eagle-eyed members of law enforcement.

Sadly, if you fell in love with Bieber's sneakers, you won't be able to "cop" a pair. PEOPLE reports that the shoes, which dropped back in January with a $160 price tag, are sold out. However, you can always hit the local hardware store and slip a regular ol' zip tie through the laces of your favorite kicks if you want to emulate this fashion power move.

If you also totally dig Bieber's tan trousers, well, you can't get those, either. They appear to be a part of his very own Drew House brand, which recently launched and references his middle name. The House of Drew has dropped two neutral basics collections and everything is totally sold out on its site at the moment.

As of press time, Abloh has yet to respond to the sartorial snafu.