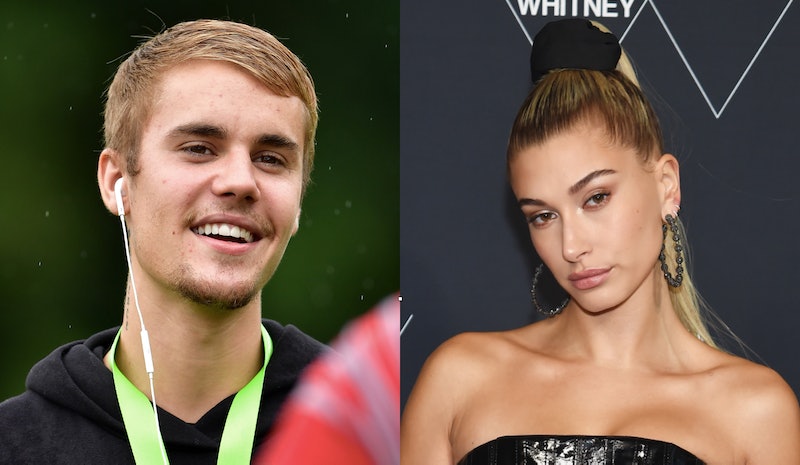 Fans of the Biebers are on an emotional roller coaster right now all thanks to Justin Bieber's April Fools' Day photo of Hailey Baldwin that's sparking pregnancy rumors. The singer first shared a sonogram that appears to be an April Fools' Day prank. The image comes from TheyDiffer.com. However, the "Sorry" singer seemed to anticipate that fans would know the sonogram was fake, so he posted a second photo that seemingly shows Baldwin preparing for an ultrasound. It's that post that has fans seriously wondering if the couple could be expecting. Bustle has reached out to Baldwin and Bieber's reps for comment on the posts, but have not yet heard back.

Not long after those photos of Baldwin at the doctor, Bieber posted yet another Instagram. In this one, there's a dog in the sonogram and a caption that confirms this was all a prank. "Wait omg is that a,,, APRIL FOOLS," he wrote. Fans are understandably confused, while Baldwin seemed to have tried to tip everyone off early on that her husband was joking. She commented on the first sonogram photo, "Very funny."

It's unlikely that the couple will be sharing real baby news in the immediate future since Baldwin shared in a November Cosmopolitan interview that although she does want kids, she's not in a rush to have one "any time soon." That makes perfect sense, especially since she and Bieber have been married for less than a year.

Meanwhile, fans on social media were quick to call Bieber out for his problematic April Fools' Day posts. Twitter user @disvirgo wrote, "@justinbieber idk if this is an april fool’s joke but if it is, it’s disrespectful for you to fake hailey being pregnant. there are literally women who are desperate to get pregnant, can't get pregnant at all, and suffered through miscarriages. please have some respect." Another user, @selsuality, tweeted, "MANY WOMEN CANT GET PREGNANT OR GO THROUGH MISCARRIAGES AND WOULD LOVE TO HAVE THAT CHILD YOU JOKING ABOUT @justinbieber."

Bieber isn't the first celebrity to make this particular April Fools' day joke, but that doesn't make it any less insensitive. Last April, Arie Luyendyk Jr. made a similar post about his wife, Lauren Burnham. It was also met with backlash, and he ultimately apologized on Twitter writing, "I do have sympathy for women struggling from infertility. My April Fools prank was in no way meant to offend women who struggle with that. I apologize if you were effected personally by my post."

It remains to be seen whether or not Bieber will also offer fans an apology. Until then, his posts serve as yet another example why this particular April Fools' joke needs to be retired for good. As BuzzFeed pointed out, an estimated 6 million women in the United States have trouble getting or staying pregnant, per the CDC. For them, fertility is anything but a joke, and seeing people share fake pregnancy news only adds their pain.

Celebrity or not, Bieber's joke is an April Fools' fail that shouldn't be repeated again next year by him or anyone else.