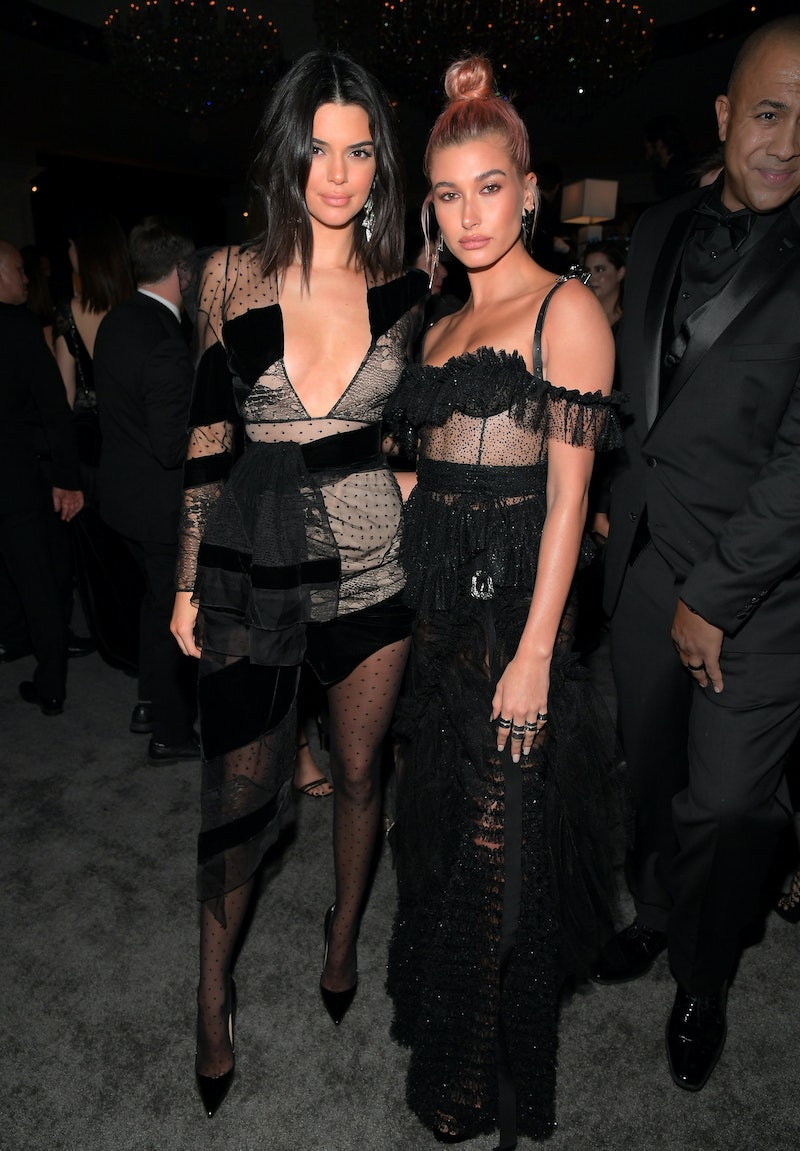 Usually, controversy makes for the biggest celebrity news stories, but sometimes it can be way more interesting when everyone is getting along — especially people who are super famous. Over the weekend, Justin Bieber shared a photo of Kendall Jenner and Hailey Baldwin at Coachella. These three have been close for many years and they're all so busy, so it's nice to see them all finding time to hang out together. But there's one question: Who's the real third wheel here?

OK, so at this point, it seems like there really isn't a "third wheel" and they all just have very supportive relationships, but here and there, Bieber may be a bit of a third wheel, since these besties are so close. Or at the very least, he's on photography duty and killing it as an Instagram husband. He's even the one who shared the photo, which is adorable. Jenner commented on Bieber's April 14 Instagram post with, "gangs back," along with a black heart emoji.

Jenner has been very supportive of the newlyweds ever since they went public with their relationship. In September 2018, Jenner discussed Bieber and Baldwin's engagement during an interview with Jimmy Fallon on The Tonight Show. She told Fallon, "Whatever makes them happy, I'm happy. I've been friends with both of them for a very long time. So, everybody's happy, and that makes me happy." How sweet.

These three have been hanging out together for years. Jenner opened up about her closeness with Baldwin in a May 2018 interview with Elle. The model revealed, "[Hailey] was actually best friends with Kylie [Jenner], and I was good friends with her cousin Ireland [Baldwin]. Hailey lived in New York, and whenever we were there, we would hang out with her."

Their relationship really took off when Jenner participated in her first New York Fashion Week. She confessed that she "stole Hailey from Kylie." She recalled, "From then on, she was my homie."

However, it wasn't that simple. She revealed, "At first, Kylie was mad; I had to bring them back together and be like, ‘No, it’s okay, guys.’ But it’s all good; that’s our love story." And now that love story includes everyone in their inner circle having close friendships with each other.

Bieber has been very supportive of Jenner throughout the years. In 2016, he made sure to nab a copy of Vogue with the model on the cover and he posted a photo of the issue on his Instagram page. He wrote, "Congrats ken you look beautiful."

More recently, Bieber shared a throwback photo with Jenner at a past Coachella. He captioned the photo, "Coachella better be this good this year @kendalljenner." And apparently, it was, since Bieber got to share a photo of his wife and Jenner enjoying the music festival. If only someone posted a photo of all three friends at Coachella together. Maybe one of them will go for a #latergram or a #throwbackthursday?

Life really is more fun when everyone can be friends. Now it's just time to wait to see what this trio's next adventure is... whenever they are able to align their superstar schedules again.