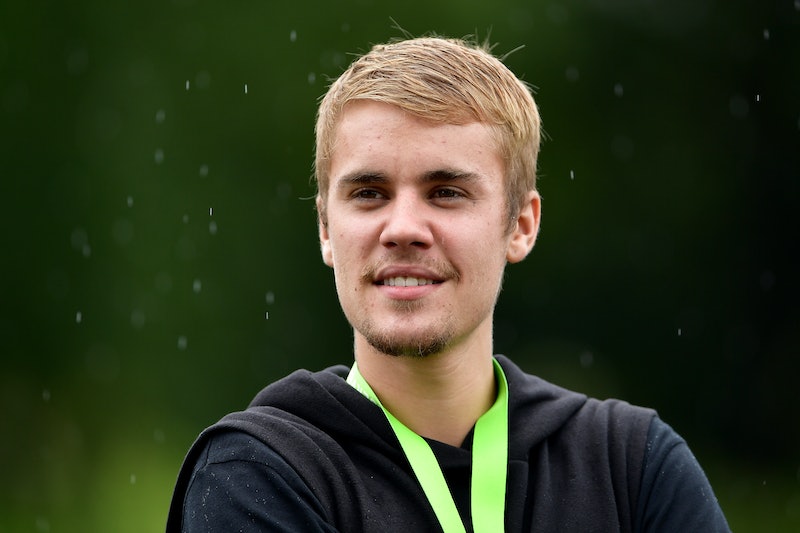 Like many stars, Justin Bieber is taking a break for his mental health. With massive influence, and having 106 million followers on Instagram alone, it's incredibly brave for the artist to openly speak about his inner struggles. On Monday, March 25, Bieber opened up about releasing more music "ASAP" in a lengthy Instagram post. While he's been transparent about his demons in the past, he also explains how much his mental health affects his current work and reluctance to release more music and tour.

The picture is of Bieber posing from the neck down, wearing a shirt from his line Drew, on a balcony overlooking the ocean. He started the post by acknowledging that many fans have been asking for more music:

"So I read a lot of messages saying you want an album .. I've toured my whole teenage life, and early 20s, I realized and as you guys probably saw I was unhappy last tour and I don't deserve that and you don't deserve that, you pay money to come and have a lively energetic fun light concert and I was unable emotionally to give you that near the end of the tour."

In the summer of 2017, Bieber canceled dates on his Purpose Tour for his "soul and wellbeing." Clearly, he feels that touring right now would not be a path that would be healthy for him, nor beneficial to his fans. He continued opening up about his deeply-rooted struggles in his post, and why he isn't rushing to put music out, but rather focusing on his work while balancing other significant things in his life.

"I have been looking, seeking, trial and error as most of us do, I am now very focused on repairing some of the deep rooted issues that I have as most of us have, so that I don't fall apart, so that I can sustain my marriage and be the father I want to be. Music is very important to me but Nothing comes before my family and my health. I will come with a kick ass album ASAP, my swag is undeniable and my drive is indescribable his love is supernatural his grace is that reliable.... the top is where I reside period whether I make music or not the king said so. but I will come with a vengeance believe that.. (grammar and punctuation will be terrible pretend it’s a text where u just don’t care)."

While Bieber hopes to release a "kick-ass album ASAP," it's only fair for fans to hear where he's coming from, even if they don't totally relate, and allow him to follow this process in his own time. Bieber revealed a bit more about his state of mind in a March 9 post. In the photo, Bieber's eyes are closed and his arms are wrapped around his manager Scooter Braun to his left and Kanye West on his right. In the caption he revealed he had "been struggling a lot" and "just feeling super disconnected and weird" later asking fans to pray for him.

In February, both Bieber and his wife Hailey Baldwin opened up about their struggles as a unit in the Vogue piece titled, "Justin and Hailey Bieber Open Up About Their Passionate, Not-Always-Easy but Absolutely All-In Romance." Bieber revealed, "I got really depressed on tour... I’m still processing so much stuff that I haven't talked about. I was lonely. I needed some time." His wife, at one point, said, "Marriage is very hard. That is the sentence you should lead with. It's really effing hard."

What matters is that Bieber is taking the time he needs to get to a better place, and his fans will understand, regardless of how long it takes for new music.

More like this
Ed Sheeran’s Surprise Gig Included An Iconic Britney Spears Tribute
By Bustle Editors and Darshita Goyal
Mariah Carey Is Releasing Her “Lost” '90s Grunge Album
By El Hunt
Self Esteem's “F*cking Wizardry” Is An Anthem About Knowing Your Worth
By El Hunt
Is Dua Lipa Dating Trevor Noah? New Photos Show Them Kissing & Hugging
By Brian Anthony Hernandez and Martha Sorren
Get Even More From Bustle — Sign Up For The Newsletter