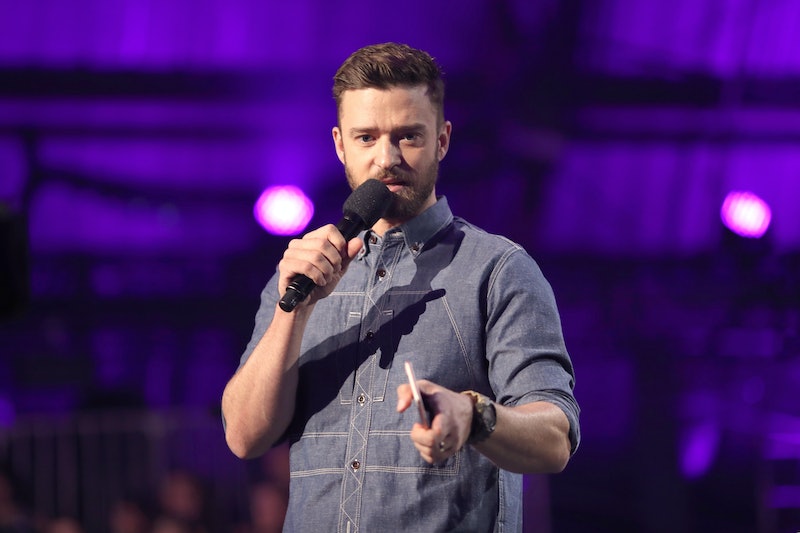 In an Instagram video posted Sunday night, pop star Justin Timberlake confirmed he's performing at the Super Bowl in February of 2018. The performance will mark 14 years since the last time Timberlake performed at the Super Bowl halftime show, which gave way to the now-notorious "wardrobe malfunction" with co-performer Janet Jackson.

"Excuse me, sir. Do you have the time?" Timberlake asks Fallon in the mini-sketch which features the announcement. The two then riff on the phrase "have time" until, in a moment of total excitement, Timberlake shouts, "I do halftime!" The video ends with both performers jumping up and down, shouting ecstatically over the news.

It has been rumored for weeks that Timberlake might return to the halftime stage. This is the first official confirmation that he will headline the performance, which is scheduled to take place on Feb. 4 next year. This will be Timberlake's third time performing in the halftime show, including a 2001 performance as part of NSYNC.

According to the league, last year's performance, headlined by Lady Gaga, was viewed by more than 150 million people. When he performs in February, Timberlake will reportedly hold the record for the most halftime performances by an individual entertainer. Next year also marks Pepsi's sixth time as a title sponsor of the show.

Rumors of Timberlake's return were frequently met with criticism because Jackson, whose right breast was accidentally exposed during the 2004 performance, was reportedly banned from future halftime performances. Following the incident, Jackson's invitation to perform at the following week's Grammys was also reportedly withdrawn. Critics believe it is unfair that Jackson was punished while Timberlake escaped much of the ire.

Twitter was quick to erupt with opinions regarding the news. Many echoed the previous weeks' criticisms.

"Unless Justin Timberlake starts his set by introducing Janet Jackson with an apology and then continues watching quietly while she does 12 minutes of her catalog solo, the Super Bowl can keep this halftime show," tweeted blogger Rafi D'Angelo.

"Janet is still banned from performing at the Super Bowl," tweeted writer Shanita Hubbard. "Meanwhile, Justin Timberlake will be [headlining]. Sounds about white."

Others argued that, at the very least, Jackson should also be allowed to return to the halftime stage.

"Alright if Justin Timberlake gets to come back and get a second chance at the Super Bowl so should Janet Jackson," tweeted user Alyssa Fisher.

Of course, not everyone was upset about the news. Many fans expressed excitement about seeing him take the stage yet again. But on Twitter, at least, the criticisms seemed to initially outweigh the praise.

As rumors circulated about Timberlake's anticipated performance, other reports indicated that Timberlake was not the only high-profile artist asked to appear. Jay-Z is rumored to have turned down an invitation to perform, which some believe might be to support Colin Kaepernick, who is not currently signed to a team. The NFL did not directly address rumors that Jay declined to accept the invitation, nor that any invitation was issued at all.

As of now, the NFL has not released the names of any other artists scheduled to appear during the show.

"This announcement is just the beginning," the NFL said in a statement. "Leading up to Super Bowl LII, fans may visit Pepsi.com for behind-the-scenes looks into Timberlake’s journey to the Pepsi Super Bowl LII Halftime Show, as well as other surprises along the way."