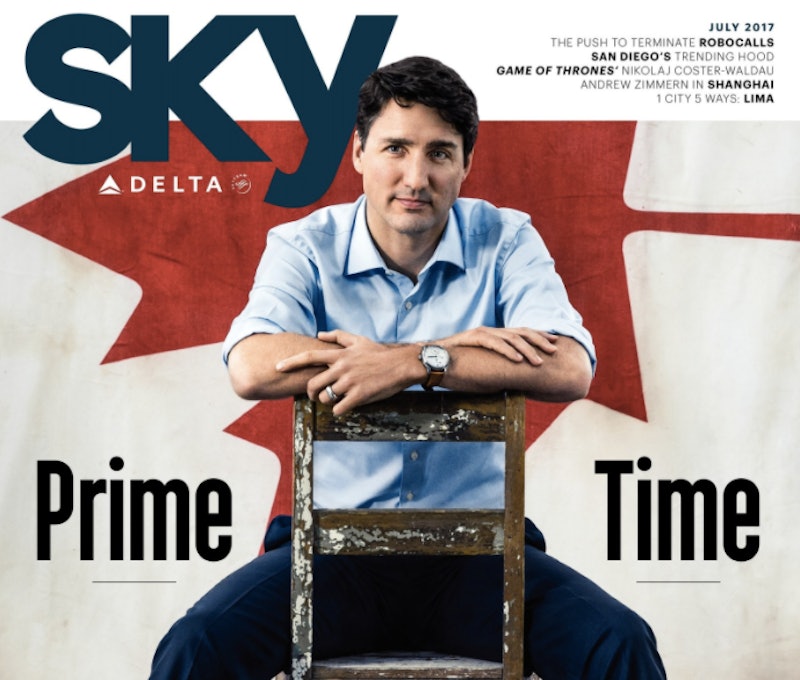 Few world leaders are as well put together as Canadian Prime Minister Justin Trudeau. Yet even the most charming political operator isn't exempt from having their look critically discussed on Twitter, as was the case with Trudeau's manspreading Sky magazine cover, complete with a chair turned backwards and a mild smirk on his face.

At just 45 years old, Trudeau, with his boyish charm and knack for the right touches, has long been a media darling with a savvy sense of how to generate positive attention in popular culture: Visiting his constituents on a kayak, for example, or smoothly countering President Trump's signature arm-jerking handshake style.

But on the July edition of Delta Airlines' in-flight magazine, celebrating Canada's 150th anniversary, Trudeau went with a look that became the subject of many a discussion from Twitter users. In front of a Canadian flag, with the words "prime time" on either side, a sleeves-rolled-up Trudeau gazes out at the reader while sitting on a worn-out backwards chair, looking for all the word like a guidance counselor — or a self-satisfied subway manspreader.

From comments about his history as the "cool" substitute teacher to his wide-open legs, Twitter had some of the strongest reactions about Trudeau's magazine cover.

1. You Can Call Me Justin

3. How Did Delta Know

4. Nothing Screams "I'm A Feminist"

6. Manspreading All Over The Cover

7. That Would Be Great

8. Throw Away Your Textbooks

11. Thought Smokin' Was Not Allowed

Needless to say, Trudeau's combination of looking cool, casual, and also like he was trying just a little too hard to look cool and casual, set off a lot of jokes, jabs, and eye-rolls among the denizens of social media. Of course, Trudeau is historically social media-aware and image-conscious enough that the jokes probably roll off his back.

As for what's actually in the magazine? Well, who knows? The only way to answer that is to actually grab a copy of the upcoming issue of Sky for yourself, and unless you're flying Delta anytime soon, that might be a little bit tricky. According to PR Newswire, the Trudeau issue will be appearing on Delta flights throughout the month of July, and if you're flying into Canada, you'll be able to nab some celebratory Canadian snacks, too.

More like this
How To Support Gun Control Reform Right Now
By Morgan Brinlee and Carolyn Steber
Taylor Swift, Kerry Washington & More Speak Out On Uvalde Mass Shooting
By Jake Viswanath
7 Gun Control Advocates To Follow On Twitter
By Madhuri Sathish-Van Atta
TikTok Is Using A Kendrick Lamar Song To Post Thirst Traps
By Courtney Young
Get Even More From Bustle — Sign Up For The Newsletter