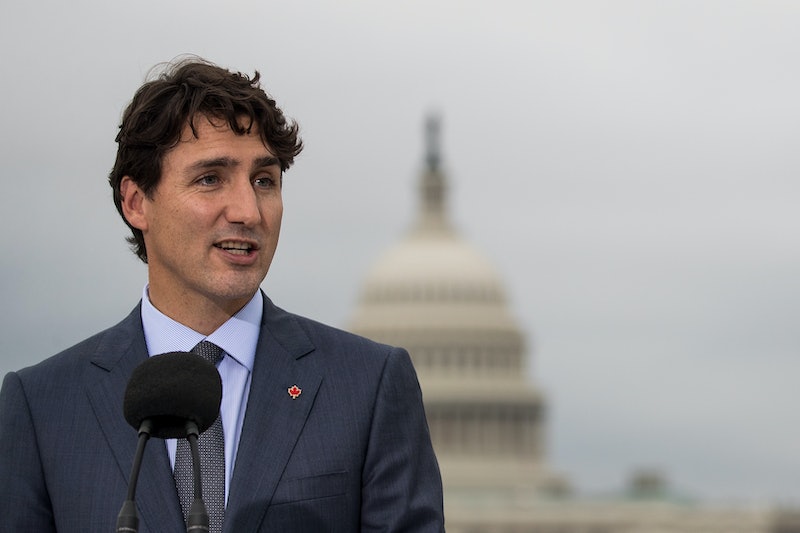 During a town hall meeting on Thursday, Canadian Prime Minister Justin Trudeau requested a woman say "peoplekind" instead of "mankind," as part of a larger effort by the Canadian government to make language inclusivity a priority. On Wednesday, the Canadian Senate passed a bill making the country's national anthem gender neutral. While Trudeau's intent with his comments was to promote inclusivity, he was widely mocked by critics for his remarks.

At the event, held in Edmonton, Alberta, a young woman with a reported affiliation with the World Mission Society Church of God asked Trudeau about policies related to religious charitable organizations in Canada. In the middle of her question, she commented "Maternal love is the love that is going to change the future of mankind" — that's when Trudeau cut her off.

"We like to say 'peoplekind,'" he said, "not necessarily 'mankind.'" The audience applauded after his comments, but some Twitter users were shocked that Trudeau, a man, would cut off a woman to tell her that "mankind" was offensive, while others wondered if the prime minster was attempting to make a joke.

It's clear by the country's recent initiatives that Trudeau is not kidding. In the new gender neutral version of the anthem, the second line of the song, "O Canada" will be changed from "true patriot love, in all thy sons command" to "in all of us command."

There's been 30 years plus of activity trying to make our national anthem, this important thing about our country, inclusive of all of us. This may be small, it's about two words, but it's huge ... we can now sing it with pride knowing the law will support us in terms of the language. I'm proud to be part of the group that made this happen.

Trudeau's "peoplekind" thing was dumb. Conservatives will treat it like a war crime for weeks, which is also dumb.

It's true that many conservatives have been tearing into the prime minister since he made the off-hand remark. A lot of them are making jokes about what other "politically incorrect" words will soon be made "illegal."

Trudeau has long built a reputation for himself as a feminist and supporter of equal rights. In an op-ed for Marie Claire in the October 2017 issue, he advocated that people should raise their boys as feminists, because "our sons have the power and the responsibility to change our culture of sexism."

Trudeau wrote that teaching boys to be feminists allows them to be more empathetic and to "escape the pressure to be a particular kind of masculine that is so damaging to men and to the people around them." Trudeau concluded the piece by saying that "to raise our kids feminist is to honor their future, because they have the responsibility — and the power — to shape it for the better."

In addition to making language more inclusive, the Canadian government is working to close the gender gap in other areas. For instance, the Senate approved legislation in November 2017 to expand rights for indigenous women. It amended a law that prevented indigenous women and their descendants from obtaining the same rights allotted to indigenous men, including tax breaks, voting rights, and access to land and healthcare.

While there is still room for improvement when it comes to gender equity in Canada—for instance, women still make 74 cents to every dollar that a man earns and gender-based violence affects approximately half of all Canadian women—Trudeau's administration has made progress.

"It's important to recognize the hard-won gains of the past few decades and of our current government," Maryam Monsef, Minister for the Status of Women, told Global News.

We are fundamentally protected against discrimination under the Charter of Rights and Freedoms, which is unique to Canada. For the first time, the 2017 budget includes gender recognition which influences how we tax programs and policies. We've spent several nights this week in graduation ceremonies where more women than men are graduating and entering the workforce. That's all part of progress.