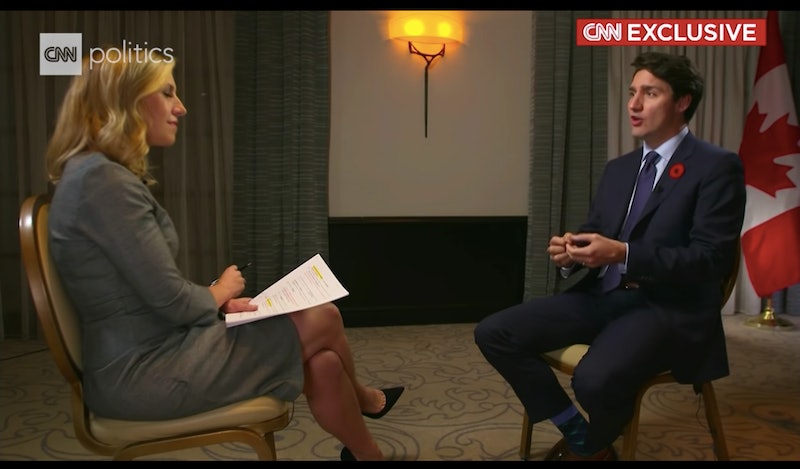 On the latest episode of Boss Files, the prime minister of Canada Justin Trudeau sat down with CNN journalist Poppy Harlow for an extended discussion. In the interview, Trudeau revealed what inspired him to be a feminist, his thoughts on equal pay, and why he believes it's so important to advance gender equality policies.

Early on in their discussion, Harlow pointedly asked Trudeau, "Are you a feminist?" In response, Trudeau enthusiastically replied, "Yes, absolutely, I'm a feminist. Because a feminist is someone who believes men and women should be equal, and who believes that there's a lot more work to do to get there."

Harlow then proceeded to ask the prime minister, "Who or what made you a feminist?" In his reply, Trudeau emphasized the influence of his family, saying:

My father taught me about the importance of fundamental rights and defending everyone's basic rights, inalienable rights. But I don't know that I would've ever called him a feminist, because he was of a very different generation. My mum made me a feminist. My wife makes me a better feminist. But I've been someone who has understood the importance of defending everyone's fair chance to succeed.

The Canadian prime minister also shared a story with Harlow about how his wife, Sophie, taught him about the importance of raising their sons to be feminists. Trudeau explained that after his daughter, Ella-Grace, was born, he had indicated to his wife that he believed it was imperative to raise her as a feminist.

Sophie concurred, but then asked him, "And your sons?" In response, the prime minister had said, "Oh, oh, yeah. I guess I need to raise them to be feminists, as well," realizing that it was equally important to raise boys and girls to be feminists. Trudeau expounded on this notion to Harlow, saying:

[Kids should be raised] where you can have a world in which our daughters believe they can do anything, but in which our sons also believe our daughters can do and be anything and will be allies to them. That's really how we have to raise our families.

Throughout the rest of the interview, Trudeau discussed the issues of equal pay and gender diversity in the workplace at length. He reflected on his recently-proposed pay equity legislation to close the pay gap between men and women in federal jobs and shared why he believes it's imperative to have legislation tackling this issue. As the prime minister described:

There is a problem in that women aren't being paid what their true value is as if they were men ... We're not getting the full economic participation or success of the women, and that's lowering our outcomes as a society. So, to recognize that for jobs of equal worth, women should be paid as much as men, is something we're making more transparency around, more accountability on ...

Among many other topics, the prime minister also discussed the importance of having more women on corporate boards, an issue area for which he also introduced legislation. Trudeau stressed that, in addition to having equal representation, companies with diverse boards also "tend to do better" because of the benefits of including diverse perspectives in the workplace.

Overall, Trudeau's interview with CNN's Harlow demonstrated how and why he is committed to advancing feminist policies and principles. It seems clear that working to ensure that everyone's rights are equally protected and respected has been a cornerstone of Trudeau's personal and political philosophy for quite some time.