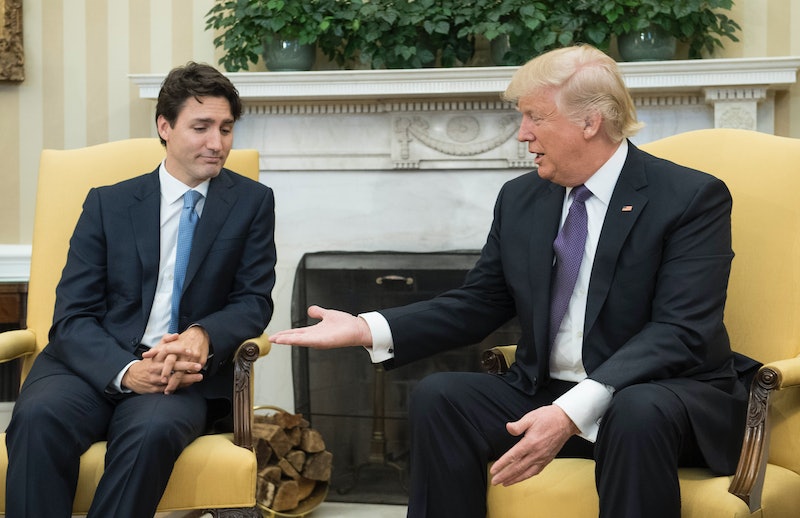 On Monday, Canadian Prime Minister Justin Trudeau dropped in on President Donald Trump. That sound you hear is a million Americans' hearts shattering. Why does that one have to be our leader? (Can we swap him for the other one? I won't say anything if you don't.) After a predictably awkward handshake and a presumably even more uncomfortable chat between the avowed feminist and the avowed "pussy grabber," Trump held out his hand for Trudeau to shake — and for a split second, Trudeau just stared at it blankly.

It was only a moment. Trudeau, ever the statesman, swiftly took Trump's hand and allowed the president to shake it exuberantly. But he hesitated, and, fortunately, a gazillion and one photographers were on hand to capture that moment of hesitation. "Really?" Trudeau's eyes are telegraphing as he gazes upon Trump's outstretched hand. "I mean, really? I have to do this?"

We've all been there, Justin. Obama had to hand over the White House keys with a smile on his face. Clinton decided to show up at Trump's inauguration and smile earnestly at her former opponent. Michelle Obama tried hard to hide her real feelings about Trump on Inauguration Day. As for non-Trump supporters, we've cycled through stages of grief: Sadness. Misery. Hopelessness. Bargaining. Acceptance. Every time Trump tweets, I'd argue that a nation goes through the whole thing over again.

Let's take a closer look at Trudeau going through some stages of his own.

Twitter, of course, was quick to pick up on Trudeau's forced smile.

Here's what that moment looks like if you didn't hit pause.

Trudeau is many things: pro-refugee, pro-LGBTQ, pro-diversity, pro-marijuana. He is not, however, pro-Trump, having said last month: "There are things that we hold dear that the Americans haven't prioritized." Cough, cough.

Trudeau is also not able to convincingly adapt his facial expression to say, "Indeed! This is a respected and valued world leader like myself!"

Compare his expression, for example, to when he met Obama.