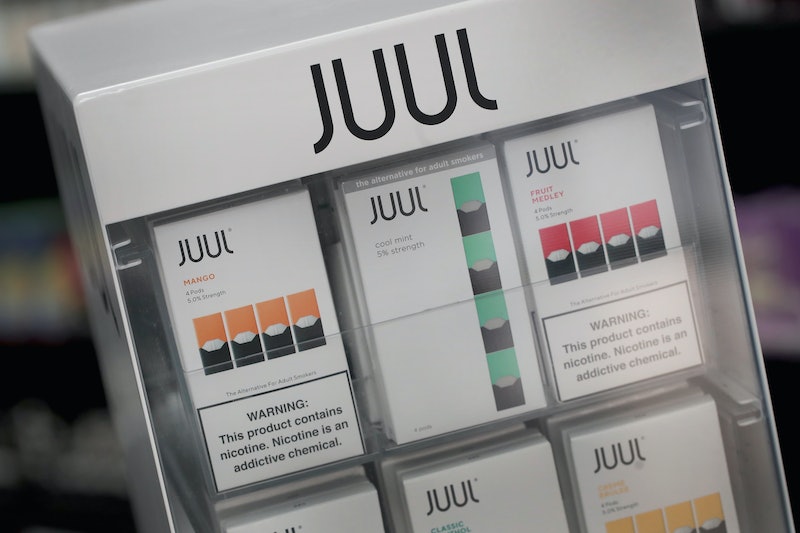 As part of a larger response to the crisis of minors getting their hands on vapes, e-cigarette industry leader Juul Labs, which claims more than 70 percent of the e-cigarette market in the U.S., is announcing some changes to the promotion and distribution of its products. After continued government pressure and public outcry, Juul will stop selling most flavored pods in stores and is making efforts to tamp down its social media promotion, the company announced in a statement posted on Nov. 13.

Popular Juul pod flavors including mango, fruit, creme, and cucumber will no longer be sold at over 90,000 retail locations, though the company notes that these flavors were never intended to be targeted towards minors. The statement cites how more youth-friendly flavors like “Gummy Bear or Cotton Candy” were never among their flavor offerings. The mango, fruit, creme, and cucumber flavors account for approximately 45 percent of retail sales for the $16 billion company, according to The New York Times, and will still be available for purchase on the company’s website. The FDA is expected to announce a ban on sales of flavored e-cigarettes in convenience stores and gas stations later this week, according to The Washington Post.

An estimated three million high school students have vaped within the last month, according to The New York Times. Juul promised “additional age-verification measures” and third party verification for online shopping to help restrict the pod purchases to people 21 or older. Convenience stores, vape shops, and other retailers will now only sell tobacco, menthol, and mint flavors that “mirror what is currently available for combustible cigarettes,” the company noted in the statement, which arrived before the Food and Drug Administration’s own anticipated anti-teen-vaping measures.

Because teens live on the Internet, the company will also cease promotion of its wares on social media in an additional attempt to reduce the number of minors using e-cigarettes. A visit to the company’s official Instagram account notes that it is a “restricted profile” that one must be 21 years or older to view. Once you access the account, only a single post, uploaded on Nov. 13, is visible. The caption states that the account will no longer be active and the company won’t respond to any direct messages, though fans can still subscribe to a newsletter.

“To remove ourselves entirely from participation in the social conversation, we have decided to shut down our U.S.-based social media accounts on Facebook and Instagram,” said Kevin Burns, Juul Labs CEO, in the statement. The company has never used Snapchat, which has a large Gen Z user base, and their Twitter presence will be limited to non-promotional communications from now on. YouTube content, which will only be used for posting testimonials from former smokers who have switched to using Juul, now has a 21+ age restriction for user access.

“Our intent was never to have youth use Juul. But intent is not enough,” continued Burns in the statement. “The numbers are what matter, and the numbers tell us underage use of e-cigarettes is a problem.”