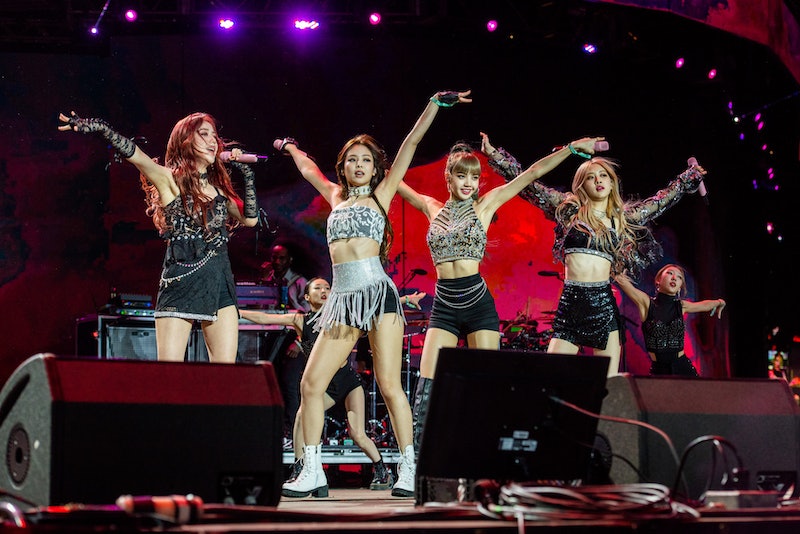 On most days, hashtags like #WhiteLivesMatter would be filled with terribly racist sentiments and misguided detractors of the Black Lives Matter movement. But on Wednesday, June 3, Twitter users are seeing something completely different. K-pop stans have taken over the #WhiteLivesMatter hashtag, which was trending on Twitter thanks, in part, to their actions, and many people are getting a much-needed laugh out of it.

In response to the killing of George Floyd at the hands of police officer Derek Chauvin, which helped spark protests across the country, K-pop fans are using their razor-sharp social media skills for the greater good. Stans of acts like BTS, BLACKPINK, and TWICE, among others, started flooding #WhiteLivesMatter and other right-wing and pro-police hashtags like #MAGA and #BlueLivesMatter with performance montage videos of their favorite groups (known in the K-pop community as "fan-cams").

K-pop fans' latest politically minded infiltration comes after the Dallas Police Department asked citizens in a May 31 tweet to submit videos of "illegal activity from the protests" through a dedicated app, iWatch Dallas. Almost immediately, stans sent in so many fan-cams that it seemingly overloaded the app's reporting system, causing the DPD to take down the app temporarily "due to technical difficulties."

Once non-fans of K-pop found out the actual reason behind the usually despicable hashtag #WhiteLivesMatter trending, they got a kick out of it, imagining how white supremacists felt about their hashtag being taken over. Other Twitter users started to join in on the fun, applauding the dedication of K-pop stans and their ability to essentially erase discriminatory statements from people who usually use the hashtag.

K-pop fans are now using their abilities to interrupt other police department accounts and hashtags used to report on potentially illegal activities by protesters, as reported by The Verge. The police department of Kirkland, WA, for example, asked followers on Twitter to use #calminkirkland to spread information about "rioting or looting." Of course, there are no reports of any crime to be found, as the hashtag is simply made up of more BTS fan-cams and K-pop stanning.

While there's still much work to be done to receive justice for Floyd, the K-pop stans have provided a brief respite and made one thing clear: they will not be underestimated.

More like this
The Real Reason Russell Brand Decided To Quit YouTube
By Sam Ramsden
Behind The Hilarity Of The "POV: You Walk Into My Room" TikTok Trend
By Lexi Inks
Why TikTok Is Flooded With Controversial Videos About "Pick Me Girls"
By Courtney Young
This TikTok Song About An Unrequited Romance Has FYPs In Shambles
By Emma Carey
Get Even More From Bustle — Sign Up For The Newsletter