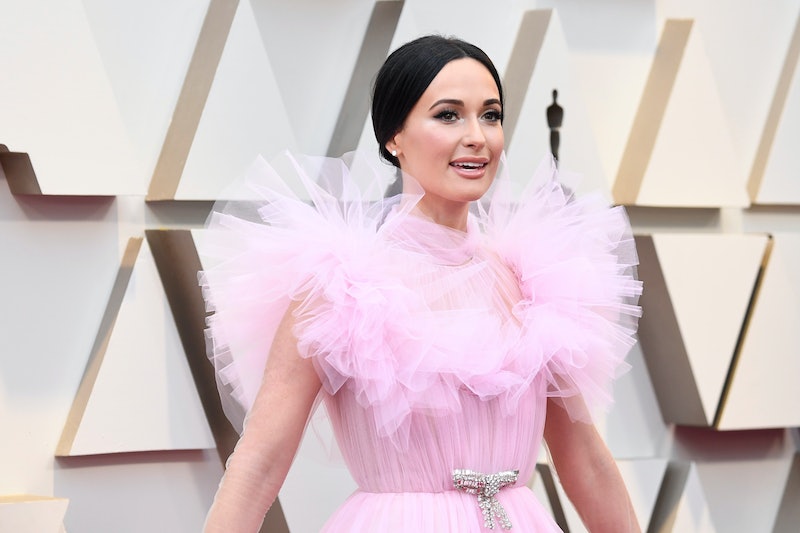 Since the Oscars is the last red carpet of award season, the stars tend to pull out all the stops. This year, many celebrities chose pink as a color scheme of their outfits and Kacey Musgraves' pink Oscars gown was no different. Plus, it was so fluffy that it looked like it came out of a cotton candy machine.

Musgraves has already won big this awards season, taking home Album of the Year at the 2019 Grammy Awards for Golden Hour. However, she attended this year's Oscars as a presenter. What better way to make an Oscar debut than in one of the most delicious-looking gowns the Oscars red carpet has ever seen?

Musgraves stepped out for her Academy Awards debut in an all-pink, all-tulle gown. The baby doll-like gown featured a high-neck and oversized shoulder details that sprawled out at the bust. The dress was cinched at the waist with a silvery glitter bow brooch while the bottom of the dress consisted of layers of pink tulle. During her interview on E!'s Red Carpet, Musgraves shared that the chiffon tulle gown was designed by Giambattista Valli. Despite all the pink that stepped out at this year's Oscars, this dress definitely stands out from the crowd in a major way.

Although this dress looks like it has an infinite amount of tulle in its design, it's actually fairly sheer when you take a closer look. Musgraves wore a nude undergarment to highlight the sheer chiffon at the hips of the gown. It's truly the ultimate Pretty in Pink look.

Since this dress is the biggest talking point of her Oscars look, Musgraves opted for a simple low ponytail and a small square pair of diamond stud earrings to complement the huge dress. As for her makeup, Musgraves stayed true to her usual style and came out in a full face beat. The country singer rocked a smokey nude eyeshadow, blush, a pink glossy lip, and a pearly highlight on the inner corners of her eyes.

Musgraves is no stranger to the world of couture gowns. During E! Live from the Red Carpet, the singer explained her love for the creativity behind Giambattista Valli.

"I have been a fan of their works of art forever, so it’s an honor to get to wear this dress," Musgraves said. "It’s like, ‘Make way for the dress. I need about 10 feet.”

The singer wasn't exaggerating either. The dress may not have a train, but it's one of the most voluminous gowns to hit the carpet this year. It's a wonder how Musgraves will sit comfortably in the audience.

Musgraves' accessories not only featured a cute glitzy brooch, but she also donned a matching clutch and a giant oval ring to match her earrings. To match her dress, Musgraves sported a pair of tulle arm cuffs made out of the same tulle material as her gown.

Fashion lovers are anticipating seeing this cotton candy-colored gown under the bright lights of the Oscars stage, and it's sure to be one of the more unforgettable looks of the night.