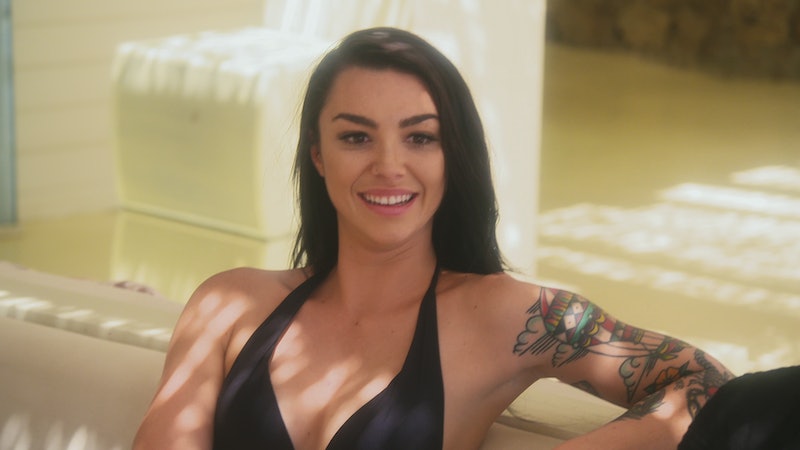 After an explosive last week in Mykonos, things at Lindsay Lohan's Beach Club, which now airs on Monday nights at 10 p.m. ET on MTV, are getting even more fiery. Mike and Mae had a major shouting match, Brent and Sara ended their relationship, and after all of the drama last week with, Lindsay and Panos call in two more VIP hosts to help out, Kyle and Kailah. Kailah from Lindsay Lohan's Beach Club arrived and immediately became the center of attention in the house.

At 25 years old, Kailah Casillas revealed in Episode 5 that she's been working in hospitality since her first hostessing job at 16 years old. Lindsay said that she brought her on because, since she's also from Vegas, like Brent, she should bring a certain air of professionalism to the job.

She wasted no time asserting herself in pointing out that Brent and Sara are "absolutely off their rockers for being in love this quickly" and letting their relationship potentially jeopardize their success in Mykonos and with the Lohan brand. While it was a possibly aggressive move to suggest Sara be fired, Kailah did make a strong case for why right this very minute, on reality TV, might not be the time or place to be looking for a partner.

But just when you thought she might be the infusion of down-to-earth common sense that the house needed, the preview for next week's episode show's Kailah going head to head with Lindsay and sniping about her boss in the confessional.

Now, the confessional isn't the only place Kailah has taken to talking about her reality star boss. In an interview with Hollywood Life, Kailah divulged that Lindsay wasn't the type of leader she would choose to work for, if only because she seems to take things on a case by case basis. "She doesn’t really run things the way I think she should and she’s very wishy-washy when it comes to employees. Nothing is cut and dry, and that’s something that made her really hard to work with," Kailah said.

Despite that constructive criticism, in a separate interview with Page Six, Kailah did say that working for Lindsay was a fangirl's dream. "I didn’t know what to expect [when meeting Lindsay] because I grew up watching her on my favorite movies, Parent Trap and Mean Girls and ironically, like, here I am in Greece working for somebody who I have known my whole life pretty much," she said.

While Kailah might have just walked into Lohan Beach Club, this isn't her first time rubbing elbows with stars on MTV. She also appeared in the third season of Challenge: Camps vs. Stars, which premiered on April 17, 2018. There, she revealed to PopCulture.com, that she met Brooke Hogan and despite judging her harshly at first, the two actually wound up becoming friends. Kailah added that she still talks to Hogan, thought she "steered clear of making any friendships" with the other cast mates.

Judging from her initial scenes and comments about past reality experiences, Kailah might not have come to Lindsay Lohan's Beach Club to make friends. The trailer for next week's episode shows that tensions will only continue to rise in the house and at the club and that Lindsay and Panos might even let someone go. If anything, Kailah will make for an interesting replacement.