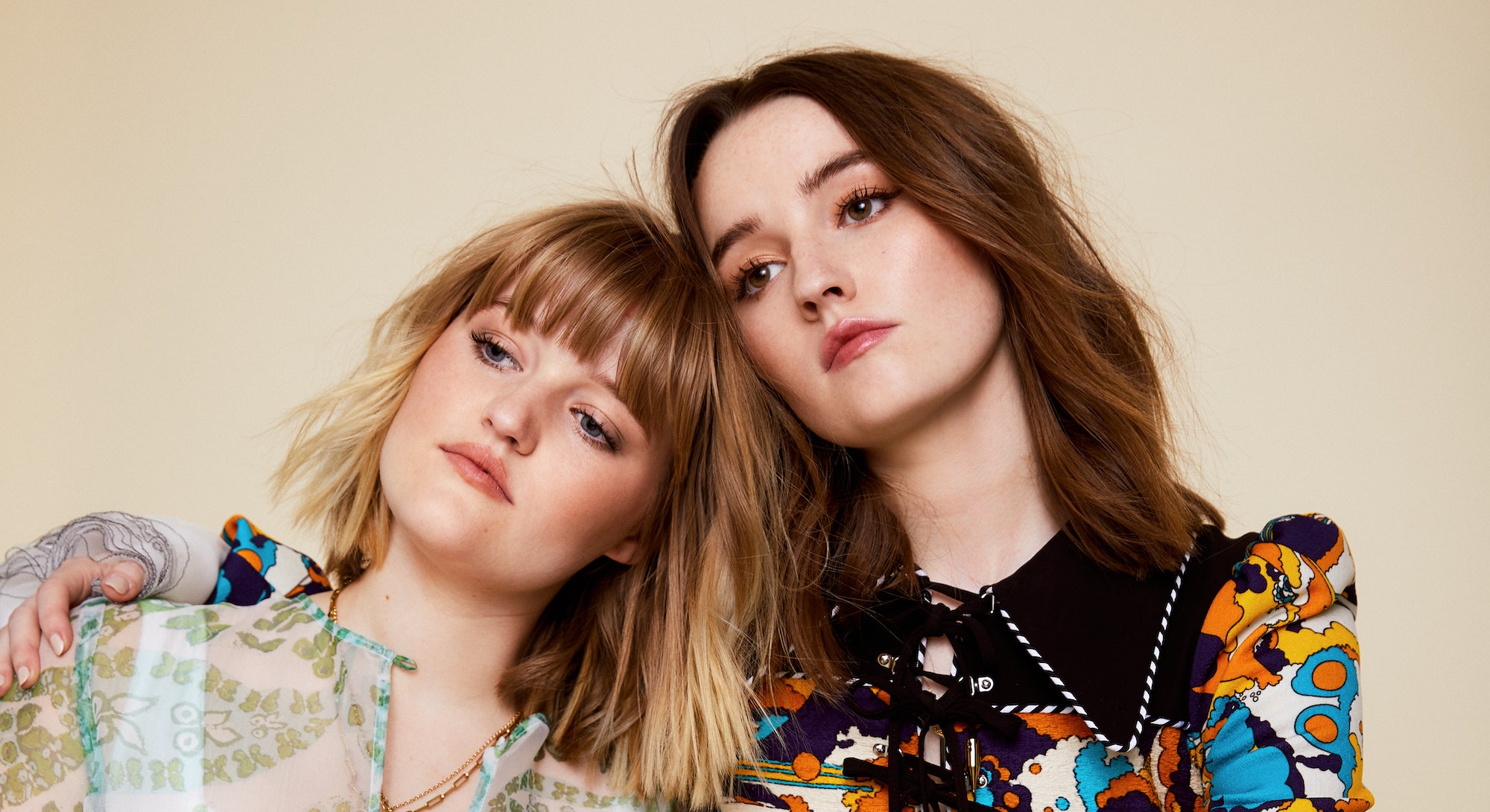 Long before they formed the folk-pop duo Beulahbelle in 2016, actress Kaitlyn Dever and her younger sister Mady indulged in a little rock-star behavior.

“We destroyed our instruments in a way that made us really angry at each other,” says Kaitlyn, 23. The pair are sitting poolside by a hotel in Hollywood as she recounts an incident from their childhood, when they were in their family’s living room learning to play “Kiss the Girl” from The Little Mermaid. “I remember you hit a cup against my guitar and it chipped the paint,” she says. “Then I set a glass down on your piano stool and it made a ring.” Mady, 21, frowns. “You did that? The ring is still there. I’m like, where did that come from?”

Nowadays their sibling rivalry is ancient history: On February 15, they released the tender breakup song “Raleigh,” the first single from Beulahbelle’s forthcoming, as-yet-untitled EP, along with a music video that they co-directed and produced. Soon they will return to the studio with producer Tony Berg (who has worked with Edie Brickell and Aimee Mann) to finish the album, a collection of songs that Kaitlyn says “speak to us, and what we have gone through in the past couple of years.”

For Kaitlyn, this included, as she puts it, some “big changes" — which is a humble way of acknowledging that she is fast becoming one of the most sought-out actors of her generation. For the past decade, she has been steadily garnering attention for her Young Jodie Foster-like tenacity, with particularly memorable roles in the FX series Justified and the 2013 indie film Short Term 12. Then, last year, she anchored two projects that met with such a chorus of praise they ended up on Michelle Obama’s year-end top-three list.

I tend to keep the harder things at work, but I've literally been mid-shower and recorded something.

The first was Booksmart, a hilarious ode to female friendship in which she and Ladybird’s Beanie Feldstein play Ivy League-bound BFFs pursuing one night of Bacchanalian fun before graduation. The film, directed by Olivia Wilde, won Best First Feature at this year’s Independent Spirit Awards and is already enshrined in the high school-sleepover canon. Kaitlyn also led the harrowing Netflix miniseries Unbelievable, based on the true story of a rape victim who is falsely accused of fabricating her attack, a role for which she earned her first Golden Globe nomination.

But while her hectic schedule frequently takes her away from Los Angeles — where she lives with her parents, Mady, and their younger sister, Jane — she and Mady still find time to create new music. “I'm constantly writing,” says Kaitlyn. “I tend to keep the harder things at work, but I've literally been mid-shower and recorded something.” Mady, who studies screenwriting and film music at California’s Chapman University, laughs. “It’s a lot of voice memos going back and forth,” she says.

“Music has been a huge part of our lives,” says Kaitlyn. “We're just now showing it to the world in a bigger way.”

The sisters credit their parents, former figure skaters, for their formative music education. They remember their mother, Kathy, cranking Alanis Morissette’s Jagged Little Pill on long drives to and from ballet class in Texas, where they lived before relocating to L.A. when Kaitlyn was nine. Meanwhile, their dad, Tim — who briefly voiced the famous purple dinosaur from the mega-popular children’s program Barney & Friends — taught them to harmonize. He also turned Kaitlyn onto her favorite band, The Cure. “I still keep some songs un-listened to on purpose, because I want to make it seem like they're still releasing music,” she says.

Growing up, Mady looked up to Kaitlyn, and remembers shrieking with excitement when she got her first big break, as a bullied fourth grader in 2009’s An American Girl: Chrissa Stands Strong. “She's like the ship master, and me and Jane, we follow,” says Mady. “It’s that sort of dynamic.”

Kaitlyn shakes her head and points out that Mady easily bested her on the piano. “I don’t think I got along with my piano teacher very well,” she says, which is partially why, at eight, she asked for a butterfly-shaped guitar from Santa Claus. “You were her favorite and I was always a little bit jealous of that.”

At talent shows in elementary school, Kaitlyn and Mady performed as Hot Pink, covering songs by Avril Lavigne and Kelly Clarkson, before changing their name to Anime Pearl, “which made absolutely no sense,” admits Kaitlyn. “We were playing word association and were like, oh, that sounds cool,” says Mady. Anime Pearl played a few gigs at small L.A. clubs, one of which was attended by Jason Reitman, who directed Kaitlyn in the 2014 dramedy Men, Women, & Children.

“When we shot that, Jason and I would send songs back and forth, and one day he texted me this Nancy Sinatra song [“You Only Live Twice”], and said, ‘If you ever think about playing this with Mady, I'd love to hear it,’” she recalls. “I was like, ‘Mady, get in here.’’' Their version was used in Reitman’s 2018 film Tully, along with “Let You Go,” an original track that they wrote for the closing credits, per Reitman’s request. They rechristened themselves Beulahbelle, after an ancestor who died in infancy, which they learned of while thumbing through their grandmother’s photo albums.

During the press junkets for Booksmart, Wilde advised Kaitlyn that if she wanted to experiment with directing, she should start with a music video. It was the push the sisters needed: They enlisted friends and shot the video for “Raleigh” over Thanksgiving weekend last year. On a soundstage, sparingly decorated to look like a bedroom, the sisters engage in a strange, synchronized modern dance to the beat of the song’s aching refrain, which they say is about “the ups and downs of first love.” Mady explains that the gossamer, vintage-looking visuals were inspired by Kaitlyn’s favorite Abba videos. “They used an overlay effect, almost cheesy stuff, and no one really does that anymore,” says Mady. Kaitlyn chimes in: “I love making sad things kind of funny.”

Beulahbelle have performed live only a handful of times, including on MTV and at a Fashion Week dinner following a Prabal Gurung runway show, but once the EP is finished, they hope to tour, Kaitlyn’s schedule permitting. Later this year, she will appear in Hulu’s horror series Monsterland and an anthology series for FX called Platform, from The Office’s B.J. Novak. She also occasionally reprises her role as Tim Allen’s daughter in the Fox sitcom Last Man Standing, after having been a regular cast member from 2011 to 2017.

“I forced her to share her Google calendar with me,” says Mady, laughing. Kaitlyn corrects her. “She created the Google calendar. I feel like I float a little too much through life sometimes, and lately I've been really taking things as they come. It’s been a lot.” She smiles at her sister. “But Mady is very on top of it.”