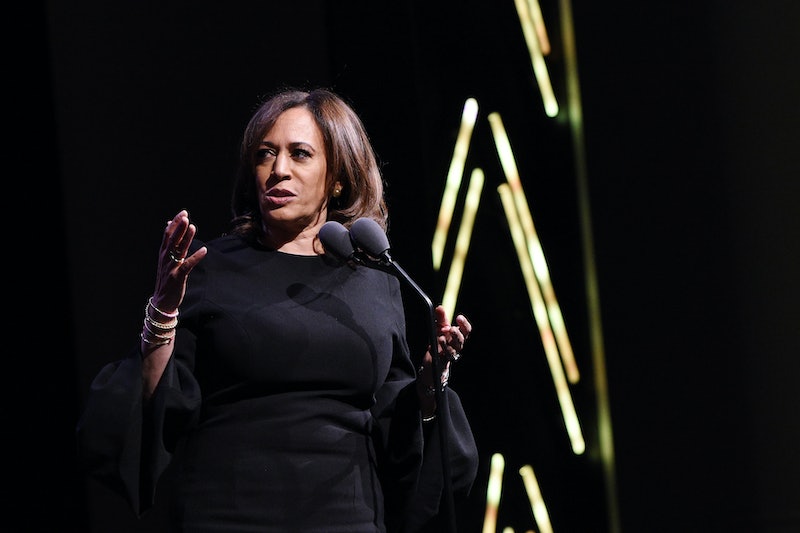 With the 2020 midterms behind them, potential Democratic presidential candidates are expected to begin announcing their campaigns in the relatively near future. One such possible contender, Kamala Harris, says a 2020 presidential run decision may come as soon as the beginning of the next calendar year.

“It will ultimately be a family decision,” Harris told Morning Joe co-host Mika Brzezinski at the Know Your Value conference in San Francisco on Saturday, according to Politico. “And over the holiday,” she said, “I will make that decision with my family.”

President Donald Trump is running for reelection, and, in turn, the pool of potential Democratic candidates has been closely watched by political analysts for months. Other potential contenders include Sen. Elizabeth Warren, Sen. Bernie Sanders, Sen. Cory Booker, and former Vice President Joe Biden, according to The Washington Post. Sen. Kirsten Gillibrand and Rep. Beto O'Rourke are also among those on the list.

Though Harris has not announced her decision formally, she has long been rumored to be considering a run. But as of now, the list of would-be Democratic candidates is crowded, and if even a handful of them do opt to throw their hats in the ring, it could be months until a clear contender presents themselves — much like the Republican nomination process back in 2016.

Political analysts have been scrutinizing potential candidates virtually from the moment the 2016 presidential election ended, looking for any sign at all that they might be preparing for a major national election. Harris is no exception. And for the senator, one such moment came earlier this year, when she announced that she would no longer be accepting donations from corporation political action committees.

The announcement immediately furthered speculation that she would be announcing a presidential campaign because, as Politico explained, such a decision appeared reminiscent of the campaign that Sen. Sanders ran in 2016. Although he ultimately lost his bid for the Democratic nomination, his reliance on small-dollar donations was widely understood to be a tremendous success. And potential 2020 nominees might opt to mimic that move, per Politico.

“We're all supposed to have an equal vote, but money has now really tipped the balance between an individual having equal power in an election to a corporation," Harris said on The Breakfast Club radio program back in April. "So I've actually made a decision since I had that conversation that I'm not going to accept corporate PAC checks. I just — I'm not."

Of course, Harris isn't the only Democrat to distance herself from corporate campaign donations — others have also followed suit. But at a time in which Americans are incredibly divided, any would-be challengers to Presidential Trump are being watched closely for any indication that they would like to take him on.

As of early December, no big-name Democrat has formally shared their intent to run in 2020, but the names will likely begin to pour in as 2019 ramps up. And for any would-be Harris campaign, it seems the answer will not arrive for at least a few more weeks.