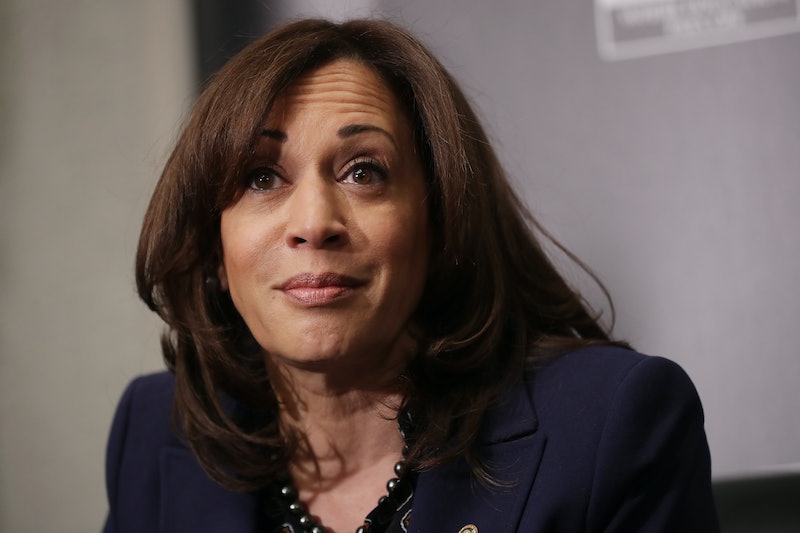 Speculation that Robert Mueller's investigation into the 2016 Trump campaign is coming to an end has been swirling for weeks now — along with the question of whether Congress, let alone the public, will ever get to read it in full. Democratic lawmakers have been vehemently arguing for transparency on this front, and on Wednesday, one senator went a step further. Kamala Harris' Mueller report petition demands that Congress get access to its findings as soon as the special counsel wraps up.

"As soon as Robert Mueller’s investigation reaches its conclusion, Congress must receive all underlying investigative materials in either a classified or unclassified setting," Harris tweeted Wednesday morning, along with a link to the petition. "Add your name if you agree."

One of six Democratic senators currently in the running for the 2020 presidential race, Harris told CNN that providing Congress with a full report is imperative to preventing misinformation after Mueller is finished. "I am an advocate for transparency. I am an advocate for a public report. And certainly that we in the United States Congress would receive all of the supporting information, be it in a classified hearing or not," she said in an interview with the outlet.

It's not unprecedented to have a special counsel's report made public. In fact, Ken Starr's 453-page investigation into President Bill Clinton was released to the general public at the same time it was submitted to Congress in 1998. But Starr operated under a now-extinct independent counsel law that gave him a lot more autonomy than Mueller is working with.

This time around, the special counsel's investigation is being directly overseen by the recently confirmed attorney general, William Barr. That means that Mueller's report will go to Barr, and Barr is in charge of notifying Congress.

Here's the catch — he doesn't have to turn over the full report. In fact, unless the report includes impeachable offenses against the president, according to Department of Justice guidelines, Barr only has to deliver "brief notifications, with an outline of the actions and the reasons for them."

During his Senate confirmation hearing, Barr said he would release as much information about the report as he legally could, but avoided committing to release it in full. "I think Attorney General Barr is going to make the right decision," Deputy Attorney General Rod Rosenstein told reporters on Monday, according to CBS, without specifying what that decision would be. "We can trust him to do that."

Reuters reported on Monday that Democrats have been considering a legal option to get the report out in the open if Barr refuses to release it — but that won't come without challenges. "Congress can subpoena the information Mueller has collected, but faces huge hurdles in getting it," Ross Garber, a Washington D.C. lawyer specializing in political investigations told Reuters. "It would have to file a civil lawsuit, which would take a long time to get through the court system, likely many years."

Rep. Adam Schiff told ABC that in addition to subpoenaing the report, Democrats are willing to subpoena Mueller himself to testify in front of Congress. "We will take it to court if necessary," Schiff said on ABC News’s This Week. "And in the end, I think the [Justice] Department understands they’re going to have to make this public. I think Barr will ultimately understand that, as well."