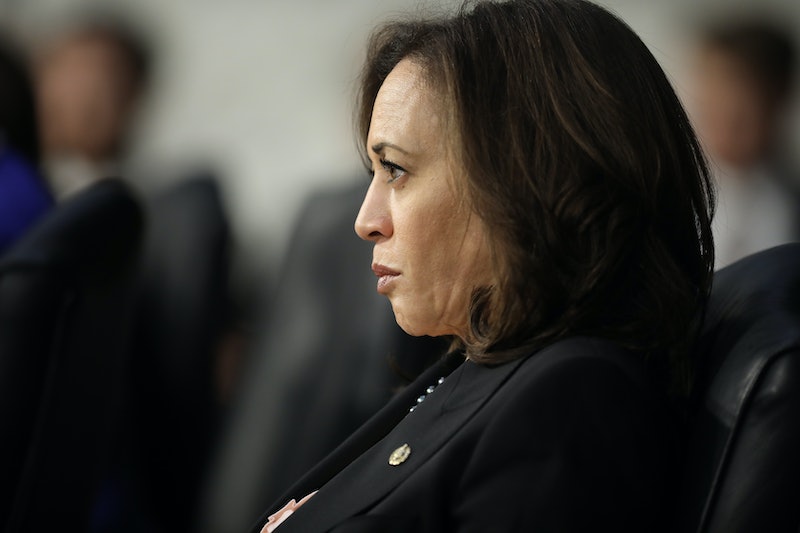 Roughly a month after she described an alleged attack against Empire actor Jussie Smollett as a "modern day lynching," a Democratic presidential candidate and California senator is commenting on new developments in the case. Sen. Kamala Harris said Smollett's case had left her "sad, frustrated, and disappointed" after authorities arrested the actor earlier in the week on allegations he'd paid two men to attack him.

"Like most of you, I've seen the reports about Jussie Smollett, and I'm sad, frustrated, and disappointed," Harris said in a statement released late Thursday. "When anyone makes false claims to police, it not only diverts resources away from serious investigations but it makes it more difficult for other victims of crime to come forward."

In January, Harris had described Smollett as "one of the kindest, most gentle human beings" she knew in a statement condemning the alleged attack against him. "This was an attempted modern day lynching," she tweeted. "No one should have to fear for their life because of their sexuality or color of their skin. We must confront this hate."

Smollett claimed he'd been beaten in the pre-dawn hours on Jan. 29 by two masked men who shouted racial and homophobic slurs, wrapped a rope around his neck, and poured a chemical substance on him. Earlier this week, however, Chicago police announced they'd arrested Smollett and charged him with disorderly conduct and filing a false police report.

They've alleged that Smollett hired the two men to attack him and then filed a police report claiming to have been the victim of a racial and homophobic hate crime. According to the Associated Press, Smollett denied the allegations at a hearing Thursday. Bustle has reached out to Smollett's legal team for comment.

While the California senator and Democratic presidential candidate expressed frustration Thursday over news that authorities now believe Smollett orchestrated his own attack, she maintained that more needed to be done to end hate crimes. "At the same time, we must speak the truth: hate crimes are on the rise in America," she said in her statement. "Just last year, the FBI released statistics that revealed a 17 percent increase in the number of hate crimes in America."

What's more, Harris went on to claim that part of the tragedy now surrounding Smollett's case was how it was being used to distract and dismiss a very real issue — the rise of hate crimes. "Part of the tragedy of this situation is that it distracts from that truth, and has been seized by some who would like to dismiss and downplay the very real problems we must address," she said. "We should not allow that. I will always condemn racism and homophobia. We must always confront hate directly, and we must always seek justice. That is what I will keep fighting for."

In a statement released Thursday, Smollett's legal team said their client maintains his innocence and "feels betrayed by a system that apparently wants to skip due process and proceed directly to sentencing."