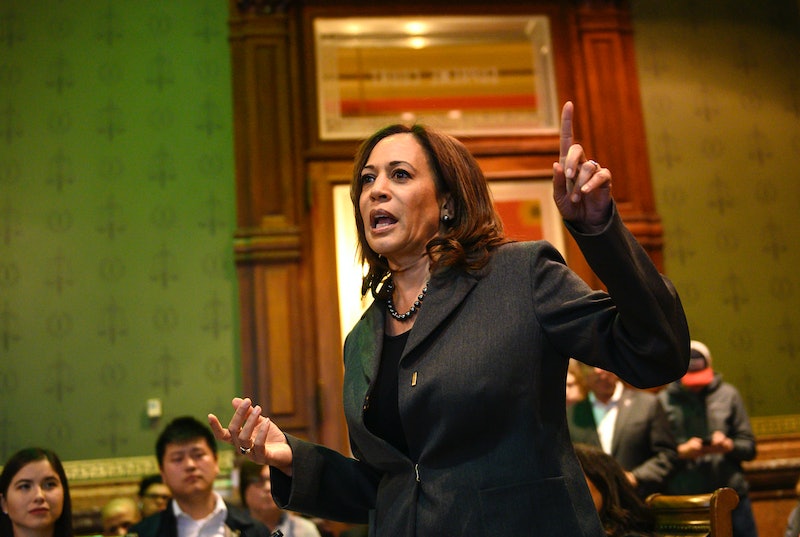 The United States hasn't made a major push to pass the Equal Rights Amendment (ERA) since 1982, but now one presidential hopeful wants to bring the measure back. Kamala Harris says she'll prioritize passing the ERA if she wins in 2020 as part of her plan for women's economic empowerment.

During a live taping of the podcast Political Party Live! on Sunday in Cedar Rapids, Iowa, an audience member asked Harris what she plans to do for women if she becomes president. The senator replied that women's empowerment must come from economic empowerment. She brought up a question she used to get from reporters.

"They'd say, 'Talk to us about women's issues,'" Harris told the audience. "And I'd look at them and I'd say, 'You know what, I am so glad you want to talk about the economy.'" She continued, "Because when you think about it, when you lift up the economic status of women, you lift up the economic status of children and of families and of neighborhoods and of communities, and all of society benefits. So, the economy. And that means passing the ERA, let's start there."

If ratified, the ERA would be the 28th amendment to the Constitution. The measure was introduced to Congress in 1923 by suffragist Alice Paul, though no major movement occurred around the proposal until 1970. Both legislative chambers passed the amendment in the '70s and sent it on to the states for ratification.

But altering the Constitution is no easy task: Every change requires the approval of three-quarters of states, and the ERA ended up being three states short. When the 1982 ratification deadline came and went, the ERA was largely abandoned.

Until recently, that is. Nevada ratified the amendment in 2017 and Illinois followed last year. Democrats in the Virginia legislature tried and failed to ratify it last week. Legal scholars disagree about whether or not the amendment can still be ratified even though the deadline has passed, according to Vox.

Some people argue that there is no longer a need for the ERA, according to The New York Times, especially since the 14th Amendment's equal protection clause has been used to fight gender discrimination in some cases. Supporters of the amendment, though, argue that having explicit language in the Constitution would provide better protection for women facing judges who are ideologically opposed to current interpretations of the equal protection clause.

Pay gaps, sexual harassment, and violence against women are areas that advocates say would particularly benefit from ERA passage, according to The Times. Legal expert Erwin Chemerinsky told the paper that he believed ratifying the amendment would lead to women being able to sue their assaulters in federal court instead of state and local courts, for example.

After mentioning the ERA on Sunday, Harris brought up other items on her women's economic empowerment agenda, including closing pay gaps and guaranteeing affordable child care and universal pre-K. She also brought up other female-centric issues, including sexual assault reporting systems and reproductive health care. Harris even argued that issue areas as broad as national security and climate change have major repercussions for women.