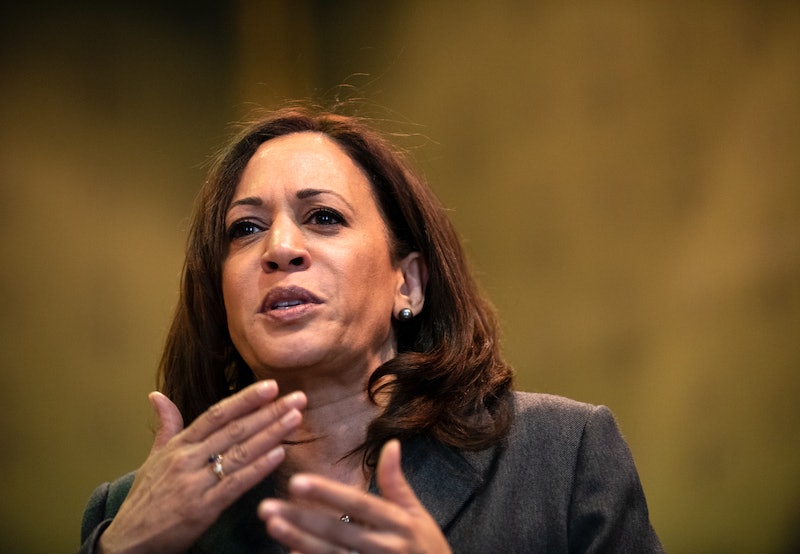 One presidential candidate has been on the receiving end of criticism from sex workers who say she's taken actions that hinder their ability to work safely. Now, in an recent interview with The Root, Sen. Kamala Harris said she supports decriminalizing sex work, as long as "consenting adults" aren't being harmed. Some sex workers' rights advocates tell Bustle that they're hesitant to embrace what appears to be an about-face from the senator, though.

Those advocates tell Bustle that although it sounds like Harris is embracing a more progressive view on the subject, they're only cautiously optimistic about the prospect that she'd push to decriminalize sex work as president. They point not only to federal anti-sex trafficking legislation Harris voted for last year, which they say hampered sex workers' ability to find work safely, but also to her record as California's attorney general. In that position, she pressed charges against executives of the now-defunct classifieds website, Backpage.com, which many sex workers had used to screen clients.

"The issue here comes down to Harris' track record on that exact issue, and her history says something different than her words in this interview did," Lee Ann Jennings, founder and CEO of the escort directory Slixa, tells Bustle. "She's really worked in the past to firm up her place as a direct adversary of sex workers."

Harris' campaign did not respond to a request for comment for this story. In her interview with The Root, Harris said she supports creating safe places for sex workers to do their jobs. "I'm a huge advocate for that," she said in the interview. "Always have been."

"When you’re talking about consenting adults, I think that, yes, we should really consider that we can’t criminalize consensual behavior as long as no one is being harmed," she added.

Carol Leigh, a longtime activist who is credited with coining the term "sex work," tells Bustle that it piqued her interest that Harris acknowledged sex work can be consensual.

"Anti-prostitution theory usually holds that ‘a woman would never consent to such activity,'" Leigh says. "I find the departure from the standard ideology encouraging, that she demonstrates some inclination toward an independent analysis."

That feeling of encouragement came with a grain of salt for Leigh, however. She points to what she describes as Harris' "longtime lack of respect and lack of inclusion of the voices and opinions" of sex workers "who she has impacted greatly."

In light of Harris' recent comments, the sex workers' rights organization Decrim NY is asking for a meeting with the senator. “Decrim NY demands a meeting with Sen. Harris so community members can share how criminalization impacts their human rights and safety," the organization said in a press release. "Decrim NY also calls on all presidential candidates to support the full decriminalization of sex work to promote the safety, wellbeing, and health of all people in the sex trades.”

Harris told The Root that while she supports decriminalizing sex work, she doesn't believe that process of doing so is straightforward.

"We have to understand, though, that it is not as simple as that," Harris said in the interview. "There is an ecosystem around [sex work] that includes crimes that harm people, and for those issues, I do not believe that anybody who hurts another human being or profits off of their exploitation should be ... free of criminal prosecution."

After Harris announced her candidacy in January, some sex workers' rights advocates — including Jennings — publicly opposed her bid for the presidency. Their opposition largely stemmed from her support for FOSTA/SESTA, the anti-human trafficking initiative passed into law last April.

FOSTA/SESTA originated as two bills — the Allow States and Victims to Fight Online Sex Trafficking Act of 2017 and the The Stop Enabling Sex Traffickers Act of 2017, respectively — which were ultimately combined into one piece of legislation. By holding web publishers accountable for outside parties who might use their sites to advertise sex work, FOSTA/SESTA effectively intimidated the people who run certain websites into cracking down on such posts, whether or not those posts were actual solicitation ads.

Opponents of FOSTA/SESTA argued that the legislation compromised sex workers' safety by preventing them from using the internet to screen potential clients, effectively forcing them back to doing demonstrably more dangerous business on the streets. Opponents also argued that the law would make it more difficult for law enforcement to pursue human trafficking cases, since the sex work industry as a whole would be forced to operate offline or on the dark web.

"As a result of Harris and other legislators’ actions, [sex work returns] to streets, where some residents are calling on the police to arrest sex workers," Leigh says. "Arrest is traumatic. The impact works against sex workers’ safety, in the opposite way that Kamala purports is her goal."

Sex workers' advocates will be watching closely to see if Harris, as a presidential candidate, shows their community that she has their best interests at heart. Jennings says, "She's going to need to talk to a lot more people from within this community about the damage she's already done and what real plans, if any, she has to make things better."