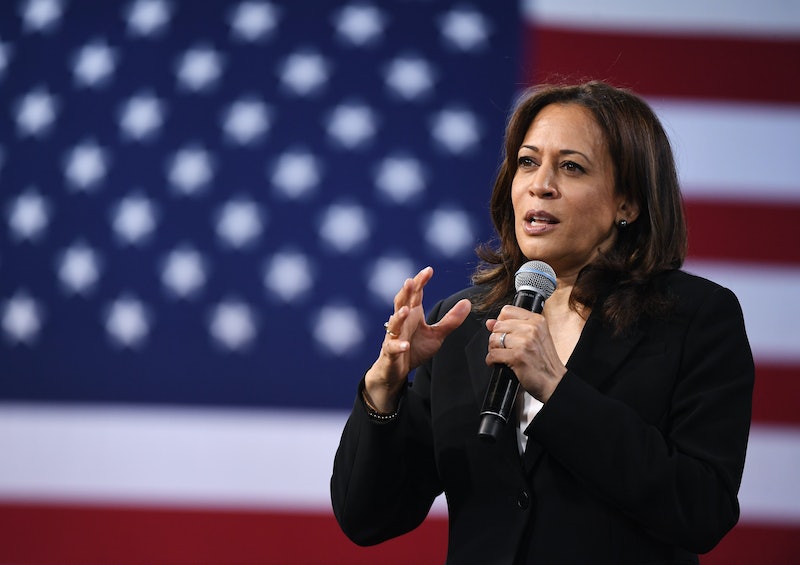 Sen. Kamala Harris is taking on the longstanding issue of representation in science, technology, engineering, and math (STEM) fields. On Thursday, Harris introduced the 21st Century STEM for Girls and Underrepresented Minorities Act, which would encourage participation in K-12 STEM education programs among girls and other underrepresented groups of students, including people of color and students from LGBTQ, disabled, and low-income communities.

"When we have more women, people of color, LGBTQ folks, and people with disabilities in STEM jobs, we get better results," Harris said in a statement. "Preparing our nation’s students for the jobs of the 21st century starts in the classroom, and we must ensure that the benefits of that education are shared equally with those who are currently underrepresented in STEM professions."

The key part of the 21st Century STEM for Girls and Underrepresented Minorities Act is a $40 million grant program that would be awarded to school districts to boost participation in STEM education. The money can be used to provide tutoring and mentoring to students, offset the costs of materials and field trips, partially fund STEM-based internships, and pay for training for school staff to reduce racial and gender bias, according to the bill's text that Harris' office provided to Bustle.

STEM diversity advocates tell Bustle that Harris' bill is a good initial step, if not a fully comprehensive solution to the "leaky" pipeline for these jobs. According to a Pew Social Trends report from 2018, while there has been some improvement, women and racial minorities continue to be vastly outnumbered in STEM professions. Black and Hispanic employees were "underrepresented among those in STEM jobs with professional or doctoral degrees," the Pew report stated, and women underrepresented in engineering and computer science occupations.

Yana Rodgers, an economist and the faculty director at the Rutgers Center for Women and Work, tells Bustle that women currently drop out of STEM education courses at various points for various reasons between high school and "plum jobs" in the industry and academia.

"There's been a lot of discussion about how to plug the leaks," Rodgers says. "But this bill focuses on how to increase the flow of girls and underrepresented groups going into the pipeline."

The House version of this bill was introduced by Ohio Rep. Joyce Beatty in March as an updated version of a piece of legislation she's pushed in past years. Co-sponsoring the bill with Harris in the Senate are Sens. Dick Durbin of Illinois and Sherrod Brown of Ohio.

Rodgers pointed to the possibility of after-school programming being especially important, especially in low-income schools. She said that robotics clubs in schools that lack funding could help level the playing field, and she highlighted the need to include LGBTQ students in STEM, adding that it can help the economy as a whole when they are.

Veronica Arreola, the director of the Latin@s Gaining Access to Networks for Advancement in Science (L@S GANAS) program at the University of Illinois at Chicago, tells Bustle that for some minority students, including Latinx people, the interest in STEM is already there — but opportunities to expand that interest are lacking.

"There are already girls and underrepresented minorities interested in STEM and excelling in STEM at the high school level," Arreola says. "There are systemic issues at play that are bigger than just interest."

Arreola says a paid internship in STEM has the potential to be transformational for students who would otherwise spend their summers working to support their families. There are more efforts needed to ensure underrepresented communities aren't discouraged from continuing their STEM education in college, and to keeping them in these fields once they get there. Arreola points out that graduating with a four-year STEM degree "only gets you so far."

"There's a lot of investment to be a scientist, compared with being a business major," she says.

But Rodgers points out that this bill could help shift expectations around who STEM careers are available to in the first place.

"This bill changes the norms so that it becomes normal, expected, and common for girls to go into this field, and for their parents to support them, their peers to support them," Rodgers says. "That's also important for racial minorities, and perhaps especially LGBTQ students."

Arreola agrees. "It's about changing how the system creates scientists and engineers and mathematicians," she says.