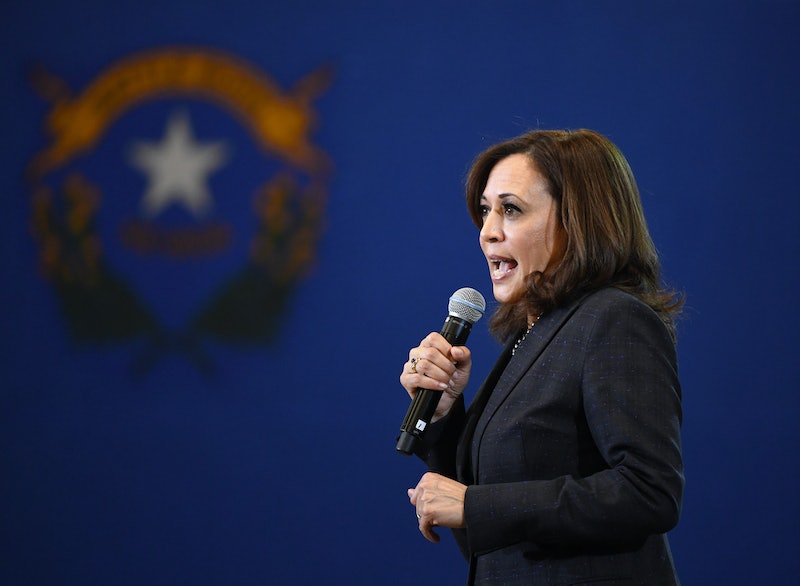 From massive teacher strikes, to public school teachers who work second and third jobs in order to support their families, it's clear that teachers in the United States are struggling to get by. A 2020 Democratic presidential candidate has pledged to change that. Kamala Harris' op-ed on her teacher salary increase plan laid out how she'll go about giving teachers across the nation a raise if she's elected president, and why she's committed to doing so.

"We must acknowledge this simple truth: We are a country that claims to care about education, but not so much about the education of other people’s children," Harris began her op-ed, which was published in The Washington Post on Tuesday. "At the most fundamental level, our children are being raised by two groups of people: families and teachers. Yet, we fail to pay teachers their value."

Specifically, Harris' plan aims to give the average public school teacher a raise of $13,500. This would inch American teachers towards the salaries of their peers elsewhere in the world — of all developed countries, teachers make the least money in the U.S., according to The Washington Post. As Harris explained, teachers in the U.S. face a "pay gap," meaning they make an average of $13,000 less per year than people who graduate with similar degrees.

Harris' plan seeks to close that pay gap by relying on both federal and state contributions in order to implement the raises as quickly as possible. As her official plan states, the federal government would put in the first 10 percent of funding for the salary increases to kick things off across the board. It would then add $3 to match every $1 that a given state contributes until the gap is fully gone.

Her plan also accounts for systematic inequalities. Students of color are much more likely than their white peers to attend schools where most students live in poverty, as The Atlantic reports. These are also the schools that see exceptionally high rates of teacher turnover, according to Harris, which then worsens the students' learning experience. As a fix, Harris' plan would mandate that teachers in the neediest schools are paid more than others with a similar level of education.

"We will help these schools reduce high rates of teacher turnover, attract talented young graduates and experienced educators, and improve teaching and learning conditions for our kids," Harris wrote.

The plan involves $315 billion of federal spending, and as it's laid out on Harris' campaign website, the money would come from an increase to the estate tax and closing loopholes for the wealthiest taxpayers. As Harris stressed, though, increasing teachers' salaries would do far more than just allow the teachers themselves to live comfortably while performing such an important job.

"This plan is about more than just salary. It’s about making an investment that will yield big returns for our country," Harris' plan reads. "It’s about valuing and respecting the working people who lay the foundation of our future economy. It’s about guaranteeing the opportunity for every child to succeed."