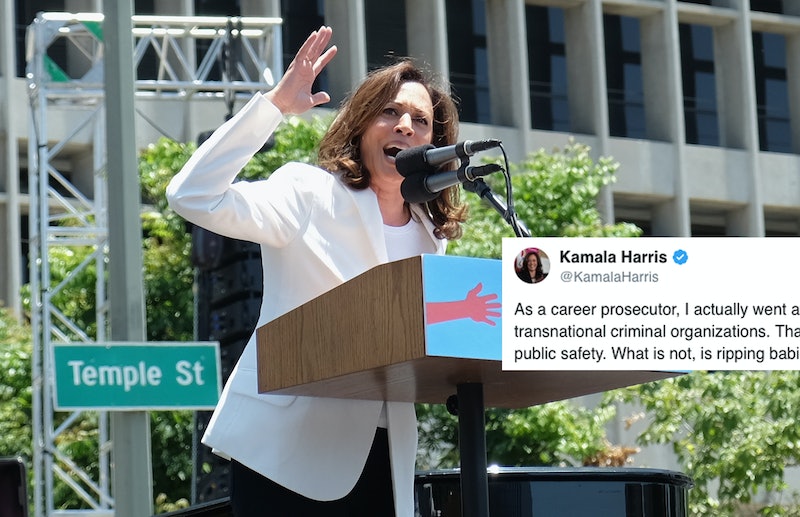 As the crisis of children separated from their parents at the U.S. border continues, the Trump administration's overarching strategy has been to deflect negative comments by claiming that Democrats fighting against it are easy on crime and want an open border. When the White House tweeted something along those lines to one loud Democratic voice on that issue, though, she didn't take it lying down. Kamala Harris fired back at the White House tweet with a reminder of exactly what her experience on the issue is.

On Monday, the White House launched what the San Francisco Chronicle reported was an "extraordinary" attack on California Sen. Harris, saying, "@SenKamalaHarris, why are you supporting the animals of MS-13? You must not know what ICE really does. Here is a link to help you out." The link was to a news release about ICE arresting a Salvadoran man linked to MS-13 and an Irish citizen also connected with organized crime.

Rather than retweeting the White House's original tweet, Harris then posted a screenshot of that provocation with a comment of her own.

"As a career prosecutor, I actually went after gangs and transnational criminal organizations. That's being a leader on public safety. What is not, is ripping babies from their mothers," Harris tweeted on Monday.

According to the biography page on her Senate website, a substantial element of Harris' pre-Senate career actually was focused on doing exactly that. After finishing her law degree, Harris began working in the Alameda County District Attorney's Office, and then in 2003 she took a leadership role as the District Attorney of the City and County of San Francisco. After two terms there, she began her time as the Attorney General of California, which lasted for almost two terms until she won a U. S. Senate seat in 2016.

As her biography states, one of her main goals as the California Attorney General was "[prosecuting] transnational gangs that trafficked in guns, drugs, and human beings" — an umbrella which MS-13 definitely would have been a part of.

As the New York Times explained, Harris hadn't actually called for ICE's abolishment — she just expressed a desire for the agency to reform itself in terms of both its mission and its strategies. Depending on how her supporters view the White House's attack on Harris and her stance on ICE, she might manage to turn the attack into a financial gain. After firing back at the White House, she appealed to her supporters to help her keep fighting back "against [the administration's] immoral policies like separating parents from their families."

NBC News noted that the White House may not have chosen its Twitter targets, Harris and her colleague Massachusetts Sen. Elizabeth Warren, at random. Both are potential Democratic presidential candidates in 2020, although neither has specifically mentioned any presidential ambitions. In her comments about ICE, though, Harris has taken care to stake out a position for herself that's slightly more moderate than Warren's, or the other Democrats outwardly calling for the abolishment of ICE.

"I think there’s no question we’ve got to critically re-examine ICE and its role and the way that it is being administered and the work it is doing," Harris said on MSNBC in June. "We need to probably think about starting from scratch."

The Twitter attack from the White House, Newsweek noted, was unusual in that it was a public account, funded by taxpayers, being used to criticize a sitting senator falsely. Harris, of course, has never expressed any support for the MS-13 gang. Given the strong words in her response, though, the whole episode might end up playing out in her favor in the end.