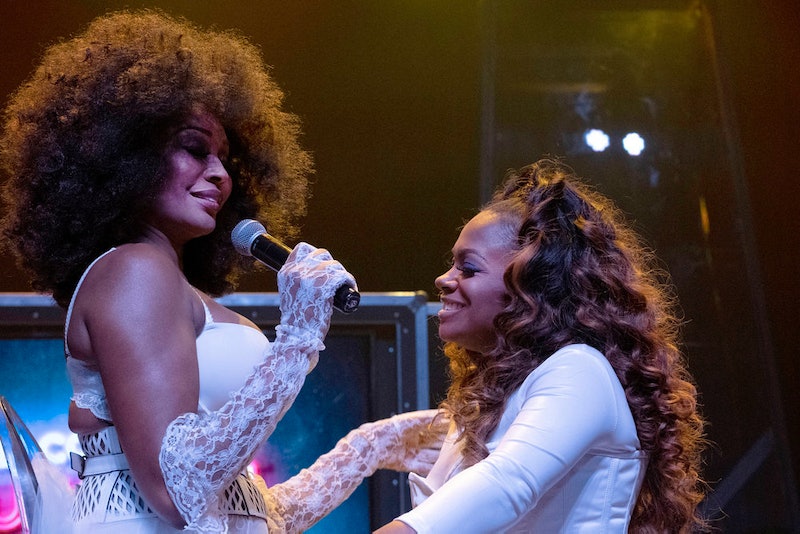 There are plenty of entrepreneurial Housewives, but no one is as much of a hustler as Kandi Burruss. She deserves all the props possible for turning a difficult time in her life into something positive. Not only that, but her new show is actually a major money-making opportunity for her. Luckily for true fans, Kandi Burruss's "Welcome to the Dungeon" show is going on tour and you can buy tickets now.

Kandi gave her fans a taste of what to expect from the dungeon party during the March 10 episode of Real Housewives of Atlanta. She even included her fellow Real Housewives Cynthia Bailey and Shamari DeVoe during that episode's performance. Unfortunately, the fans didn't get to see the entire show. After all, there was drama to discuss and tea to spill about the closet fight at Nene's house. However, the viewers got to see just enough to make them want more — which was precisely the point as the show expands outside Atlanta city limits.

Yes, RHOA diehards, Kandi is bringing her dungeon party to a city near you. On the "Welcome to the Dungeon" show's official website, there is a list of tour stops all over the country during the month of May. Kandi and her crew will perform in New York City, Philadelphia, Chicago, and other cities.

The one city that is surprisingly not on the list is Las Vegas. Kandi explained that exclusion by telling a fan, "Somebody told me that wouldn’t be a good idea because you all have so many other great shows there." But it really would be the perfect place for her show.

But maybe Sin City will make a revised version of the list. Kandi told another fan "As of now we’re only going to 12 cities." So maybe she just wants to see how it goes in those twelve cities before adding other shows. Watching the episode, there was so much visual stimulation that it was a little tough to figure out everything that was going on in the performance. Plus there were plenty of distractions during the episode, from Cynthia being visibly nervous to Shamari trying to perform when she lost her voice, there was just a lot to keep track of.

So what can the fans expect if they buy tickets for the tour? Kandi described the show in a March 10 tweet. She told her followers, "It’s a party & variety show with sexual content... it’s hard to explain because nobody else is doing. It’s wild." And it sounds like Kandi's show isn't just something to "watch." It's an experience that the audience will get to be a part of. Kandi even encourages her followers to wear costumes to the performances.

Even before the tour tickets went on sale, Kandi had a lot of support from her fans, especially given the origin of the concept. Even though it feels like a million years ago, Kandi went through a very tough experience on Season 9 of Real Housewives of Atlanta with people gossiping about a "sex dungeon" in her home and accusing of her of "planning" to drug and rape cast members in it. Kandi denied those accusations and they were inevitably retracted. Still, that can't have been easy to endure and was likely her toughest season.

Which is precisely why this new show is the perfect way to own that situation and transform negative gossip into something positive.

She got plenty of praise from the Real Housewives of Atlanta viewers for being such a smart businesswoman and making the most of a difficult situation.

Kandi definitely turned negative gossip into a sex positive opportunity — for her and or all of her fans.