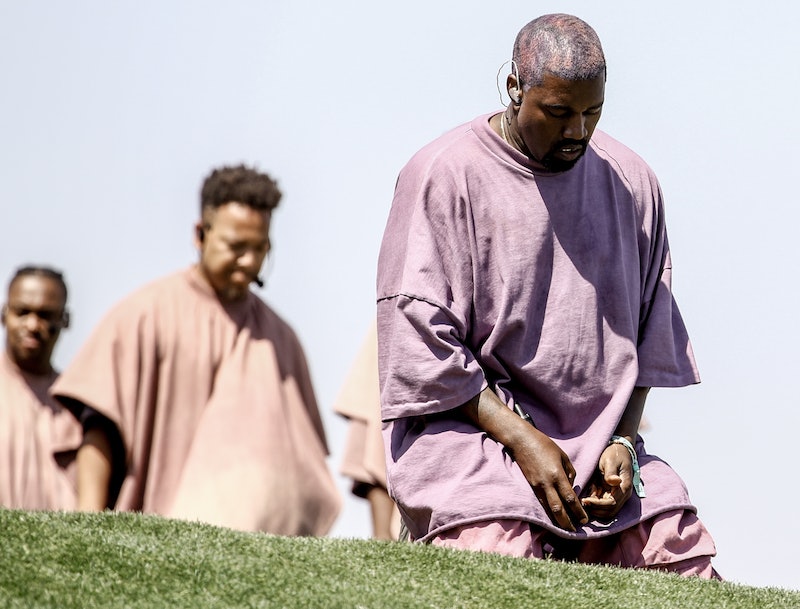 Kanye West's new album is finally be upon us — maybe, if the rapper's newest Tweet is to be believed. On Monday, Oct. 21, Kanye West announced the Jesus Is King release date (again) on Twitter, confirming a rumor that his long-awaited new album will arrive on Friday, Oct. 25. “JESUS IS KING OCT 25th,” West tweeted, also sharing an image of a blue vinyl record stamped with his name and the album title.

The new reveal comes weeks after West initially promised fans via his official website that the album would arrive on Sept. 27, information that has since been taken down. West's wife Kim Kardashian also teased the Sept. 27 release date, even posting a 12-song Jesus is King tracklist on Twitter for fans to speculate about, before plans evidently changed.

The new release date was first reported by Forbes on Oct. 12, when West apparently told fans who attended his "Jesus Is King - A Kanye West Experience" at George Washington University that the album would arrive on Oct. 25. West reportedly told fans at the event that he delayed the album because he was “making it better for y’all.” He then proceeded to play songs from the Christian-inspired album to fans, noting that some of the tracks still weren't completely finished yet.

If the new album actually comes out on Oct. 25 as now promised, it would coincide with the release of the rapper's accompanying movie Jesus Is King: A Kanye West Film, which will premiere exclusively in IMAX theaters on the same day. The film's official synopsis describes the movie as a "one-of-a-kind experience" that "features songs arranged by West in the gospel tradition along with new music from his forthcoming album JESUS IS KING."

The documentary will finally let fans witness West's Sunday Service for themselves, as it focuses on the rapper's Sunday Service performance at the Roden Crater, Turrell's new large-scale art installation built within a volcanic cone in the Arizona desert.

Given that tickets are already on sale, the premiere date for the Jesus Is King film is definitely set in stone. Whether the album actually comes out on the same day remains to be seen.

More like this
The 12 Most Controversial & Unexpected Grammy Moments Ever
By Jake Viswanath
Taylor Lautner Thought Taylor Swift's 2009 VMAs Interruption Was A "Skit"
By Alyssa Lapid
Austin Butler Recalls Lisa Marie Presley Showing Him Elvis’ Bedroom
By Jake Viswanath
You’ll Definitely Recognise Isadóra Bjarkardóttir Barney’s Mum
By Maxine Harrison
Get Even More From Bustle — Sign Up For The Newsletter
From hair trends to relationship advice, our daily newsletter has everything you need to sound like a person who’s on TikTok, even if you aren’t.