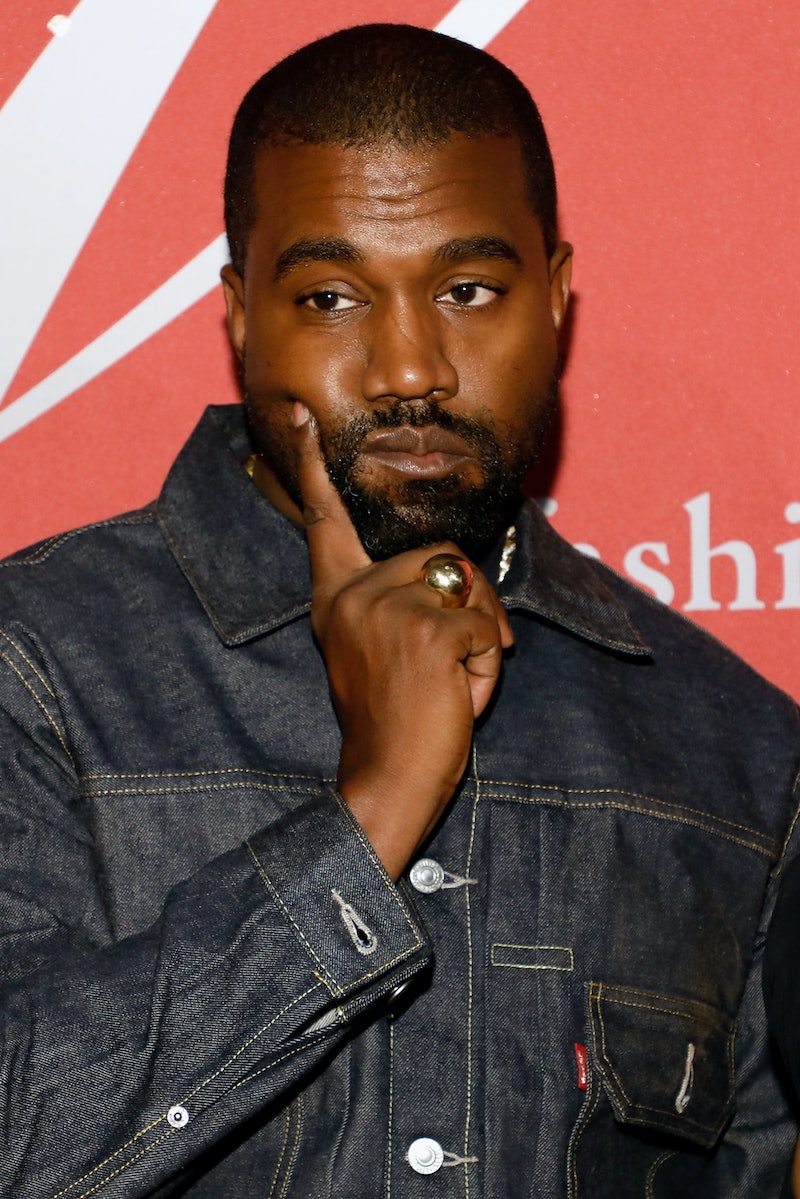 Kanye West wants to make sure that nobody forgets that he considers himself a genius — so much so, that he's willing to make it a part of his name. During a surprise appearance alongside wife Kim Kardashian at the Fast Company Innovation Festival on Nov. 7, Kanye West said he might want to change his name to "Christian Genius Billionaire" in order to ensure that everyone gives him his proper due as an entrepreneur.

West's revelation that he's considering a name change came during a conversation about the way that society and the media often denies the black community the credit for their accomplishments. "When I did Forbes, I showed them a $890 million receipt and they still didn't say 'billionaire,'" the rapper said, referencing the feature which called Yeezy a "billion-dollar empire," during a panel discussion with Yeezy footwear designer Stephen Smith. "They don't want us to know that we can buy land; they don't want us to have the 100 percent ownership I have at Yeezy."

He continued, "When people say it's crass to call yourself a billionaire, I say I might legally change my name to Christian Genius Billionaire Kanye West for a year until y'all understand exactly what it is," he continued. "It will be on the license plate." West also touched on those issues in the music video for "Follow God," released following the discussion on Nov. 8. Along with the video — which features West and his father driving around the rapper's property in Wyoming — West wrote on Twitter that his father was shocked that "a black man" owned 4,000 acres of land when he first visited the Wests in the country.

West has often shared conflicting statements about his net worth. In February of 2016, the rapper wrote on Twitter that he was $53 million in debt, and asked moguls Mark Zukerberg and Larry Page to invest in him in a series of since-deleted tweets. After asking the Facebook founder to "invest 1 billion dollars into Kanye West ideas," the rapper continued, "I’m this generation’s Disney … I want to bring dope sh*t to the world … I don’t have enough resources to create what I really can."

A few months later, he told Ellen DeGeneres that he asked for the money in order to help fuel the great ideas that he's had over the years. "I feel like that if I had more resources I can help more people," West said during an appearance on The Ellen DeGeneres Show. "I have ideas that can make the human race existence within our 100 years better. Period."

However, in an August cover story for Forbes magazine, West said he was able to turn his life around thanks to his newfound devotion to religion. "I’m just blessed through the grace of God to go from tweeting at Mark Zuckerberg [for money]" West said, to being named a "centi-millionaire" by Forbes and being the creative force behind a company worth $1.5 billion.

West has previously spoken about how his faith in Christianity has been a major positive force in his life after his 2016 hospitalization. "I will continue to be used by God," he told Apple Music Beats 1 DJ Zane Lowe recently, explaining that find God has set him on a new path. "No one loves pain but I’m still, through the good times and the suffering I praise God because I experience the blessings and I also experience the lessons."

Perhaps changing his name to "Christian Genius Billionaire" will teach him one of those lessons.

More like this
The 12 Most Controversial & Unexpected Grammy Moments Ever
By Jake Viswanath
Taylor Lautner Thought Taylor Swift's 2009 VMAs Interruption Was A "Skit"
By Alyssa Lapid
Everything You Need To Know About Kanye's Post-Kardashian Dating Life
By Bustle Editors
Jay-Z Is Performing At The Grammys, Meaning Beyoncé Might Actually Show Up
By Jake Viswanath
Get Even More From Bustle — Sign Up For The Newsletter
From hair trends to relationship advice, our daily newsletter has everything you need to sound like a person who’s on TikTok, even if you aren’t.