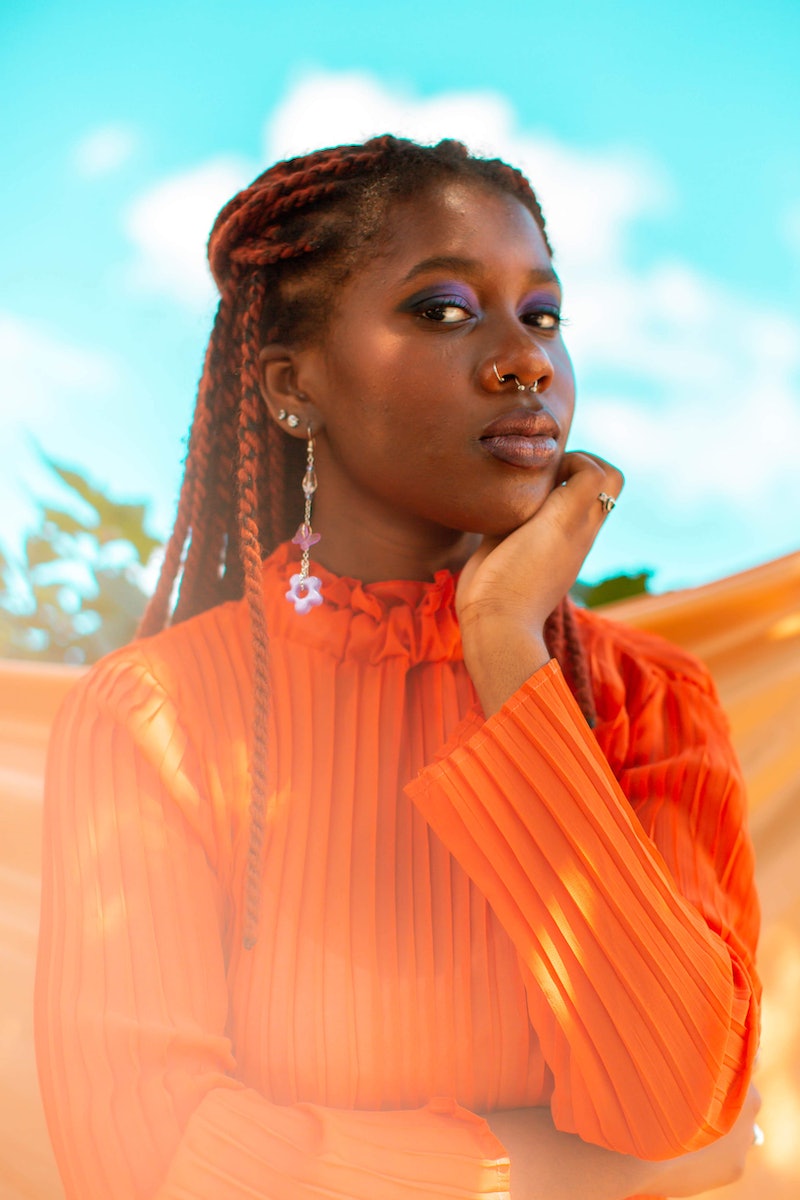 Kara Jackson’s writing, memory-dense and physical, speaks of a young woman on the edge of what’s to come. For the 19-year-old poet and activist, her written lines sing of the next phase of life — adulthood, college, the wide-open sometimes terrifying path of possibilities — a give and take of strength and gentleness that’s deeply rooted in the body of a young woman fully, delightfully, celebrating her life.

Kara Jackson is the United States Youth Poet Laureate, a weighty title she earned in April 2019. Selected for the role by a panel of judges — renowned poets and writers like Elizabeth Acevedo and Juan Felipe Herrera — from a deep pool of prodigiously talented young writers from across America. Jackson was chosen over 40 other local youth poet laureates, young people from across the country with a demonstrated record of literary excellence and a devotion to civic action; in other words, a love of words and the desire to do something with them.

The United States has had a Poet Laureate for the better part of a century, but it wasn’t until 2008 that the idea for a Youth Poet Laureate sprang into being thanks to the work of Urban Word, one of the oldest and most comprehensive youth literary arts organizations in the country. Since the ‘80s, Urban Word has worked with young writers on literacy, leadership, and personal development. Noticing an increase in young people galvanized by the 2008 Obama election, and eager to become more civically involved, the organization partnered with the New York City’s Mayor’s Office to administer local Youth Poet Laureate programs around the country. In 2017 they instituted the position of a national Youth Poet Laureate, a role defined not only by poetic merit, but also by a commitment to being actively involved in community and pursuing social justice.

The post is now in its third year and in its brief history has celebrated three young women, the first two being widely celebrated Amanda Gorman who has gone on to found One Pen One Page which promotes literacy through free creative writing programming for underserved youth, and Patricia Frazier, an artist and activist whose debut collect Graphite is a study on gentrification, loss, and her childhood in the Ida B. Wells Projects in Chicago. While the position is open to young writers ages 13 to 19, a huge range cuffing the edge of middle school and working solidly into a college career, all three Youth Laureates have been in their late teens.

More than anything, the Youth Poet Laureate program, and national position, exists to amplify the voices of young people — young people who are poets because of what they’ve experienced in their communities and driven by the urgent need to action teenage demands. For Jackson, that demand is prison abolition, a cause she’s been passionate about before she defined her role as a poet.

Jackson is now a freshman at Smith College, navigating the murky channels of being a young adult in a complicated world. It was Jackson’s essay “Poetry and Democracy” that sealed her fate as the third Youth Poet Laureate, elevating her from her role as Youth Poet Laureate of Chicago to young poet on the national stage. A songwriter before a poet, Jackson’s musicality comes through in her writing, although she’s quick to tell me that her approach to the two mediums is very different. “If it’s a poem, it’s a poem,” she tells me, when I ask if she ever sets her words to verse. “I’m more intentional with my poetry.” That intention carries through from how she structures her lines into how she actualizes her role as an outspoken prison abolitionist. As social justice is a key pillar in the Youth Poet Laureate program, Jackson uses her public role as a way to educate people on what it means to abolition prisons, emphasizing the need to humanize incarcerated individuals through the words she writes and the events she adds weight to.

Chasing down the multi-hyphenate Chicago-native is no small feat. I caught up with Jackson while she caught her breath after a full weekend of Poet Laureate duties — a two day retreat in Provincetown, Massachusetts focusing on community building and goal intention, from mission to execution — and settled into the distinctly relatable preparation of midterms.

Bustle: How did you first come to poetry?

Jackson: Poetry first found me in song. I learned to love language on a B-side, in the fine print of my father’s vinyls. Music was my first motivation to write. I wanted to make songs like Roberta Flack, for my words to fly in high frequencies, a language leaving earth. It took me awhile to understand my songs as poems. When I started high school, I joined my spoken word club after a showcase shook the wind out of me. I had never read in front of anyone, but I wanted to stand where the people I saw stood. When I started to write and engage with the words of Patricia Smith, Sharon Olds, Adrienne Rich, I began to see the mark music had on my langouring for language. I found in these poets what I had always found in the liner notes, and began to construct a lineage out of all of this language.

How do you see you role as the United States’ Youth Poet Laureate and what are you focusing on through your work?

KJ: As the National Youth Poet Laureate I am working very hard at being my regular self. While I hope to use my title to collaborate with poets around the country (and the world), I am also using my title to be incredibly usual. I want to show that the people with these titles are not magical, or rather, our magic is in our normality. I want to engage with people who look like me, and who are committed to being regular. Black women are held to a supernatural standard. I want to use my title to leverage vulnerability and put the ordinary on a pedestal.

What is keeping you focused and grounded on your mission, your schoolwork, college life [as a college freshman], and everything in between?

KJ: As I adjust to the routine of college I am trying to be very compassionate with myself. When we’re in these institutions we’re constantly fighting to be our real selves. I am trying not to let this place taint my truth. I will only let this experience illuminate it. I am making time to read for pleasure, to laugh with friends, to crank out chords on my guitar. I am approaching my work with joy, and being gentle with myself when my work is a challenge. I have a lot of goals and am committed to school right now, but I don’t want my goals to make me feel guilty, I want my goals to be realistic and casted with compassion.

Why do you think poetry matters now in 2019? What role can it play in social movements?

KJ: Audre Lorde taught me that poetry lives in the dark corners of our spirits. Poetry is our natural right. We can use poetry to give form to feeling, to make tears tangible, to build a foundation for our fears to fall back on. As we approach justice, we have to use our feelings to fashion our survival. Poetry provides the language necessary to construct the possible. In a time where fear is so frequent, we must name this fear in order to approach it. Poetry helps us christen and construct our wildest dreams, our timid ideas, for as Lorde says, “There are no new ideas. There are only new ways of making them felt.”

What are you reading right now in your *free* time?

KJ: Right now I am reading All About Love by bell hooks and Autobiography of Red by Anne Carson. For me this is also the season of Stag’s Leap by Sharon Olds, so I think I will return to it soon. Since I do a lot of reading for school, a lot of my pleasure reading is found in the familiar; Gwendolyn Brooks, Lucille Clifton, Patricia Smith, Terrance Hayes, Franny Choi. My favorite writers are also my peers. I just spent a weekend at a writing retreat with the Youth Poet Laureate cohort, and my lovely friend Azura Tyabji gifted me her book Stepwell, so I’m excited to dig into that.