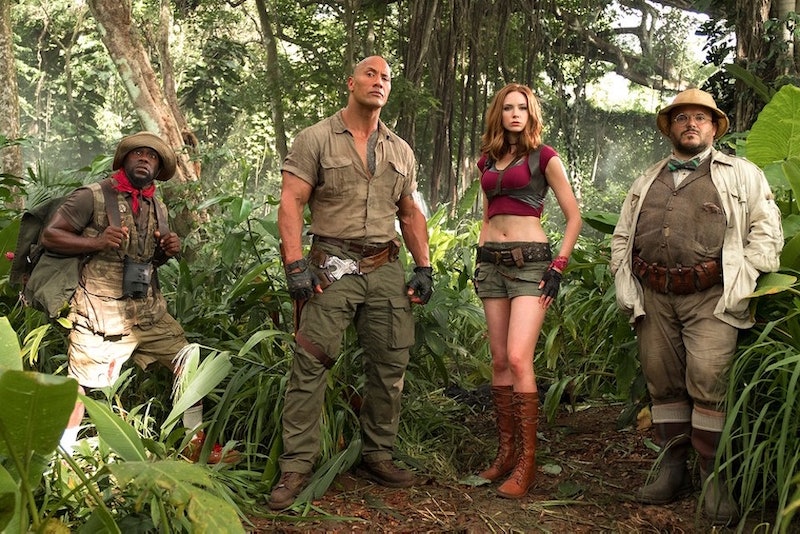 When the first images of Sony's 2017 reboot of Jumaji hit the interwebs some fans were justifiably upset. The photos featured the motley crew of adventurers in typical hiking garb — cargo pants, boots, jackets, hats — yet the lone female, Karen Gillan, is dressed in an outfit that is completely nonsensical for the jungle. In an ultra-short shorts, knee-high boots, and a cropped, skin-tight tee, she appeared to be of the Laura Croft variety of explorers, and this was upsetting. Luckily, simply dressing Gillan for the male gaze was not the intention, as the film's producer explained on set of the movie back in March.

The film follows four high-school students who are tasked with cleaning out their school's basement during detention. Not unlike The Breakfast club, these kids are all complete opposites — the popular girl, the popular boy, the nerd, the shy girl. They find an old video game and each choose a character to play. Just like the original board game transports Robin Williams' character, this video game transports these four kids into the game, where each teen becomes the character they selected. This means the film's nerdy lead becomes The Rock's character, the popular girl becomes Jack Black's character, and the shy girl becomes Ruby Roundhouse (Karen Gillan), a scantily-clad martial arts master.

On set of the film in Hawaii, producer Matt Tolmach suggests the length of Gillan's outfit is actually meant to poke fun at the way women are often dressed in video games. "When all the noise came out that was exactly what we anticipated," he says of audiences' reaction to Gillan's costume. "And it is very definitely spoken to in the movie. I don't want to give away what it is, but we're super aware of what we were doing, and it's addressed."

Sitting down with the woman herself, Gillan promises that her character is so much more than the miniature outfit we see her in on set. "I play Martha, who is a bit of a geek. She's very smart in school but not very good socially," she says, sitting under a tent in the Hawaiian jungle. "She takes on the avatar of Ruby Roundhouse who happens to be this really kick-ass karate expert. A badass girl."

And of course, being a karate expert is something Martha knows nothing about. Therefore, there's a little bit of a learning curve when the teenager is thrust into her new body. "She just does not know how to inhabit this body at all," Gillan says. "I had to do a long routine [where] I was on a guy’s shoulders cracking necks and stuff."

However stunts and action sequences are a familiar space for Gillan, who has played Nebula in two Guardians of the Galaxy films. Not only is she used to playing an ultra physical role, she's accustomed to doing it in a skin-tight body suit and blue face paint — so a tiny shorts and crop top might be a walk in the park.

"I definitely learned a lot from playing Nebula in Guardians of The Galaxy, in terms of combat, fighting and stunts," she says, "[But] I don’t know why I keep getting cast in roles where I have to do so many action sequences because honestly, I've got two left feet and I look like a piece of spaghetti trying to fight people, but it keeps on happening."

Gillan might think she's ill-equipped to take on the action sequences, but perhaps that's why she's perfect for the role: Martha isn't self-assured at the start of the film, either. And after speaking to the actor, it's clear that like Gillan herself, Martha is so much more than the outdated video game stereotype she appears to be at first gander.

More like this
At 28, Rosie Perez Risked Her Career To Stop Playing Stereotypes
By Gabrielle Bondi
Rupert Grint Just Shared A *Major* Update About Ron Weasley’s Future
By El Hunt
Anne Hathaway Shared A "Thrilling" 'Princess Diaries 3' Update
By Darshita Goyal
At 28, Debra Jo Rupp Was Living A Much Different '70s Show
By Grace Wehniainen
Get Even More From Bustle — Sign Up For The Newsletter
From hair trends to relationship advice, our daily newsletter has everything you need to sound like a person who’s on TikTok, even if you aren’t.