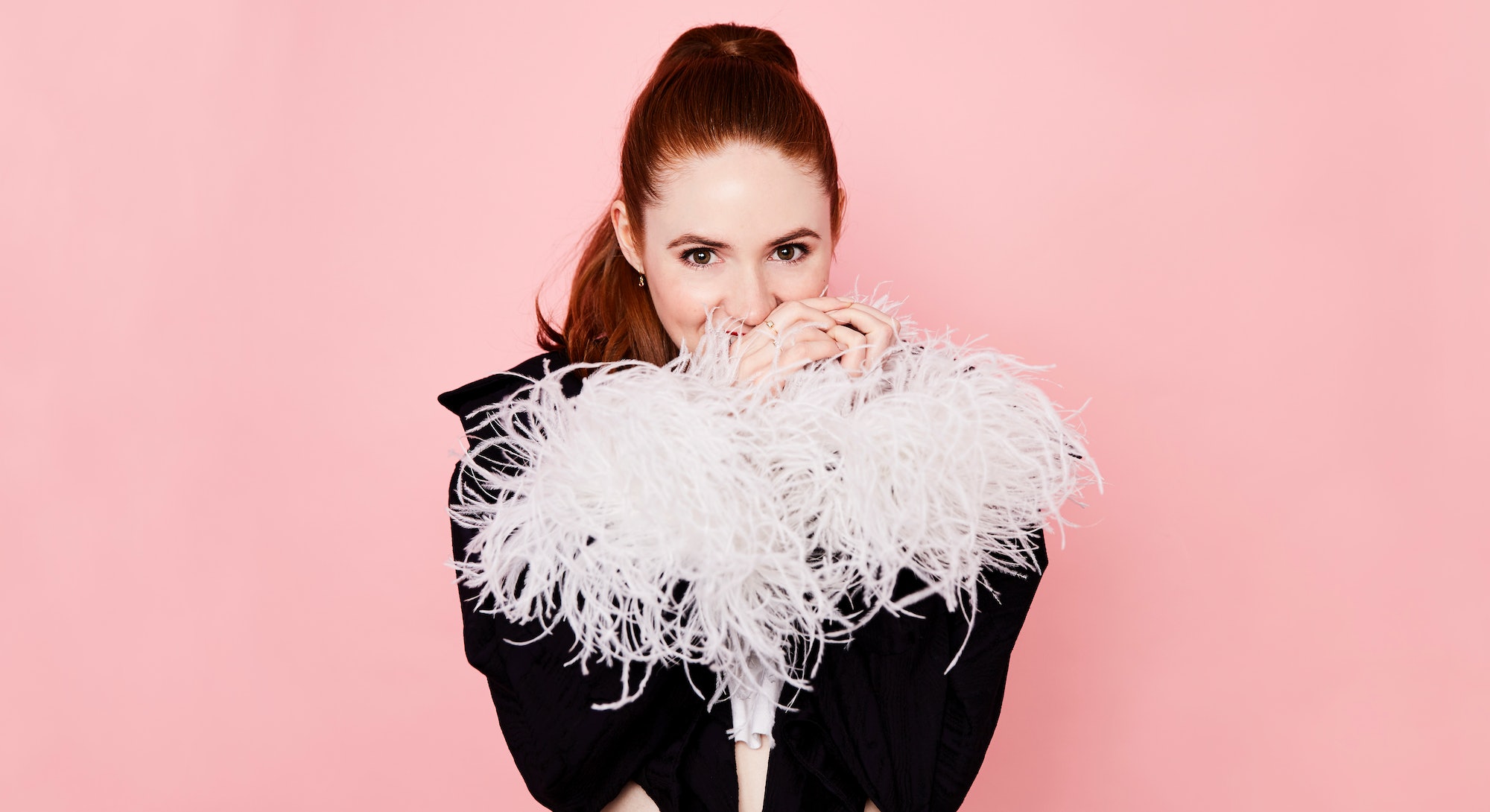 "I’ve been released from a very tight ponytail," actor and filmmaker Karen Gillan says when she sits down opposite me in the Bustle green room and I ask how she is. "It’s the best feeling in the world. Liberation."

It's tempting to look for the symbolism in the phrasing she uses to describe her post-photoshoot "release." After all, the actor who found fame in high-profile, crowd-pleasing projects like Doctor Who, where she played companion Amy Pond, and Guardians of the Galaxy, as Gamora's villainous sister Nebula, is currently doing press for her first feature-length independent film as a writer/director. (Bustle is her last stop today, hence the hair freedom.) The blistering character drama, The Party's Just Beginning, available on iTunes and on demand, charts the path of grief for one lost young woman. But Gillan doesn't operate by the assumption that you have to shed one skin to reveal another.

For her, whether she's hacking through the middle of the jungle with The Rock or huddled up in a tiny house in her hometown in Scotland, making movies is "the same job." So though audiences may feel the culture shock of seeing the 32-year-old transition from Jumanji's blockbuster wit and adventure to The Party's Just Beginning's exploration of anguish and depression, she's perfectly comfortable moving between them.

It’s the best feeling in the world. Liberation.

Sure, when you're working on an Avengers film, "you sort of get to be like a child that doesn’t have to be responsible for anything," she says, because of all the assistance and perks. But, she adds, "when it comes down to it, we’re just people in a place delivering lines of dialogue to each other." It's the assessment of a seasoned pro, pushing against the public's inclination to see actors as one thing or another, and a good reminder that so many of the limits we project on performers are just that: projected.

After all, Gillan's been doing the legwork for her debut as a filmmaker long before she nabbed a part in Adam McKay's Oscar-winning The Big Short, shared the small screen with John Cho in the much-mourned sitcom Selfie (she says they "should totally make a movie version" of Henry and Eliza's story and "just wrap it up for everyone," by the way), or teamed up with most of the Marvel crew in Infinity War. The Party's Just Beginning has been part of her life through it all, and she's not surprised or disappointed that it took six years to make.

"Thank God that that’s the case," she says. "I feel like as a filmmaker and storyteller, I’ve just grown so much over those years. I’m so glad I didn’t direct it when I was about 24."

The content of the story didn't change much between her very first draft and the final product, she explains. The narrative always centered around Liusaidh (pronounced "Lucy"), a young, disaffected Scottish woman mourning a loved one and engaging in plenty of unhealthy coping mechanisms. The non-linear story bounces back and forth between Liusaidh's last year with her best friend and her depressive spiral after his suicide, during which she meets a stranger played by her Guardians costar Lee Pace, who becomes more than a one night stand. It was raw, emotional work that underwent a lot of technical changes, simply because Gillan's first goal was to just get it out.

"I didn’t pay any attention to the things that you’re meant to, like structure or gaining momentum at all," she says. "So we sort of had to go through the whole thing and essentially restructure it, and rebuild it from scratch."

I think I’d gathered enough knowledge to make a film that I don’t hate.

Meanwhile, as she and her producers were refining the script and securing funding for the film, Gillan was getting on-the-ground experience in what was essentially her own personal film school: working on some of the most elaborate film productions of the past few years.

"I was learning so much from directors I was working with," she says, and she also "studied" the directors of photography on her acting jobs in order to master the more technical side. "And so it kind of all happened at a time that was perfect, really. I think I’d gathered enough knowledge to make a film that I don’t hate."

Gillan punctuates that last part with a low, self-aware laugh, though it also seems that she really means it. That the opposite might be the result must have crossed her mind once or twice during the lengthy process of bringing The Party's Just Beginning to the screen. Fortunately, not only was she able to sharpen her own skills as that was happening, Gillan was also spared pressure to make her vision more palatable to a broad audience. She retained total "creative control," she says, crediting one of the film's producers, Mali Elfman, for protecting her from outside opinions that could have threatened that.

You can imagine why a concept like this might make an overcautious investor squeamish. Gillan's script was inspired by the high suicide rate of young men in her native Scotland, and as she could only try and make sense of that information from her own perspective, she centered the narrative on a young woman. (Understandably overwhelmed with responsibility, Gillan "tried to back out" of playing the main character as filming drew closer, she recalls. She ended up starring anyway, mainly because she found it difficult to find another Scottish actor of the right age.) So the viewer experiences the tragedy of her friend Alistair and the other struggling men in the narrative through Liusaidh's lens. The character isn't a savior; she doesn't have the answers for these men. But Gillan herself eventually came to an understanding.

"What I’ve deciphered is just that communication is something that men need to really work on when it comes to mental health issues," she says. "Generally speaking, I think women are a little more able to express their emotions, because we do that with each other a lot."

The moment in The Party's Just Beginning that Gillan says has particularly resonated with Gillan's her male collaborators is one where Liusaidh's father overhears something troubling, but isn't able to bring himself to speak with his daughter about it. "They were like, 'That's heartbreaking, but I totally understand that feeling of just wanting desperately to talk freely, but something’s stopping you,'" she remembers.

Fortunately, the film itself seems to be opening up a dialogue. Gillan says that public screenings have been followed by cathartic question-and-answer sessions, where audience members share deeply personal stories about their own emotional battles. And the film doesn't belittle those experiences by providing a tidy solution. Gillan says that, at one point, she and her collaborators were "toying around with a happier, neater ending," but that they ultimately decided that it felt like they were "betraying the film at the very last moment."

"It’s more of an authentic, realistic account of dealing with grief, and so the character is slightly narcissistic and very self-involved, which is definitely true sometimes of people dealing with those types of emotions," she says, adding that those emotions are also "hard to escape."

Now, with an ambitiously bleak and honest first feature in the "done" column, Gillan is already looking toward the future. She'll be onscreen again this spring, reprising Nebula in Avengers: Endgame, the final chapter of this first phase of the MCU, in which, she ominously promises, "no one is safe." Then, there's some voice work in the quirky animated comedy Spies in Disguise, a new adaptation of Call of the Wild with Harrison Ford and Dan Stevens, and the Jumanji sequel, plus the just-announced all-female assassin thriller, Gunpowder Milkshake, which Gillan will lead.

And between those jobs, she'll surely be quietly at work on her own scripts. Gillan has a few writing and directing projects in development, though the genre fan, who starred in 2014's Oculus, would love to "tackle" a horror movie next. ("My favorite one is The Shining, so I would love to have a female descent-into-madness type of movie," she says.) What matters most to her is challenging herself, and encouraging other female filmmakers by continuing to tell stories.

In the position to carve out her bold and varied career however she chooses, Karen Gillan isn't waiting to be liberated. She never was.