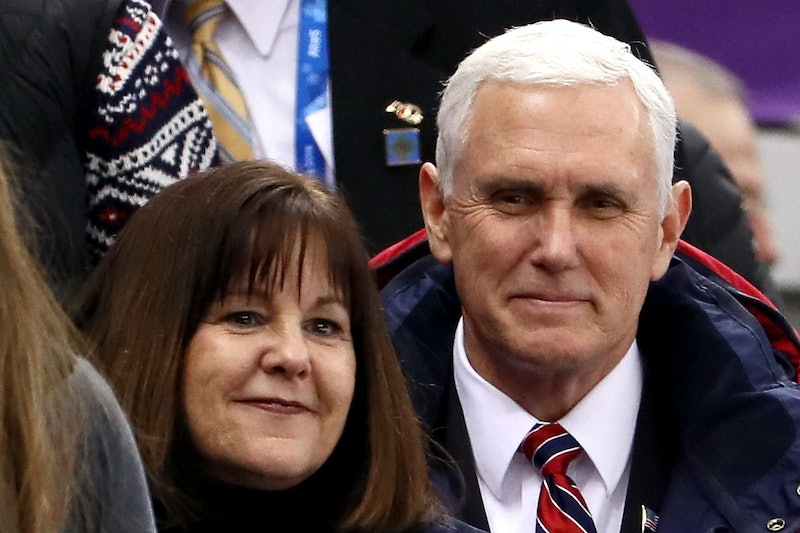 The second lady of the United States, Karen Pence, attended the Special Olympics World Games in Abu Dhabi on Wednesday, according to The Hill. Pence, who was joined by her daughter Audrey Pence, led the American presidential delegation for the event's opening ceremony.

On Twitter, the second lady shared photos from the day and added in a tweet, "What an unforgettable night! We met the most amazing athletes!" She also got to toss a Eunice Kennedy Commemorative coin in the air to help start a soccer match between the United States and Kenya, according to a White House press release. Pence then reportedly had the opportunity to witness the game between both teams from the stands.

Through an official statement from the White House, Pence said: "It is a great honor and privilege to attend the Special Olympics World Games and cheer on the amazing athletes as they compete in their sport. The athletes at today’s soccer match displayed enthusiasm and camaraderie throughout the game. I was inspired by their tenacity and determination."

It's an intense event with hundreds of sports professionals eyeing medals and recognition. According to ESPN, over 7,000 athletes from more than 170 countries are competing in the Special Olympics World Games in Abu Dhabi this year. The event will go on until March 21, according to the outlet.

According to the White House, other members in the American presidential delegation included the administrator of Small Business Administration, Linda McMahon; the surgeon general of the United States, Jerome Adams; and former pitcher for the New York Yankees Mariano Rivera, among others.

ESPN reported that the Special Olympics World Games feature sports like soccer, powerlifting, basketball, volleyball, swimming, kayaking, and other athletics. It's an event with significance that cannot be emphasized enough, according to its advocates.

In fact, a detailed resources page for the Special Olympics implores viewers that the event should not be seen as as a charity program. "The Special Olympics makes invaluable contributions to the lives of athletes that extend well beyond sports," according to the page, adding that it "gives visibility to people with intellectual disabilities. Visibility is the first step towards a positive cycle of inclusion, understanding, and respect."

According to Gulf News, Shaikh Mohammad Bin Zayed Al Nahyan, the crown prince of Abu Dhabi, inaugurated the Special Olympics World Games. Good Morning America reported that the kingdom was calling the games part of its initiative to lead a "year of tolerance."

"We are proud to inaugurate the Special Olympics World Games Abu Dhabi 2019, the world’s largest people-of-determination sporting event for which over 7,000 athletes from around the world have overcome obstacles to proudly represent their nations," Al Nahyan said in an official statement, per Gulf News.

For Pence, the trip wasn't just about sports, it seems. The second lady also tweeted photos from her visit, including a set of pictures taken at the Sheikh Zayed Grand Mosque. All in all, it seemed like a fun trip. In one of her tweets, Pence called it a "fantastic time."