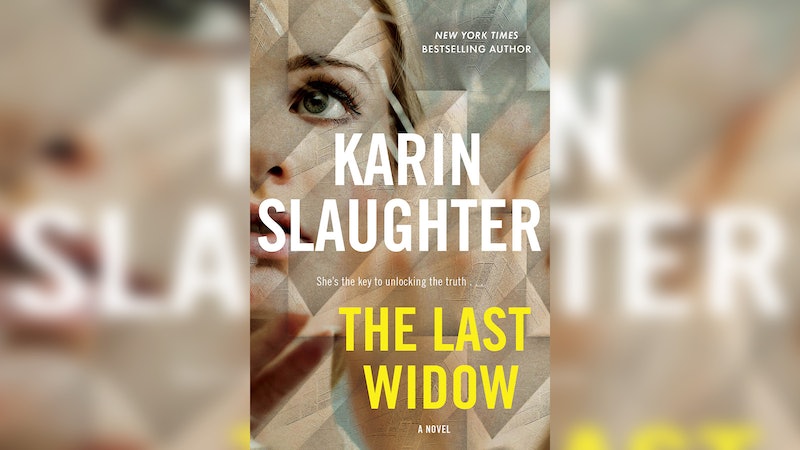 If you're a Will Trent or Sara Linton fan, you're in luck this summer: Karin Slaughter's beloved hero and heroine are back in her latest thriller, The Last Widow, out on Aug. 20, 2019. You may have to wait until August to get your hands on the book, but Bustle has an exclusive look at the cover and a chapter below, so you can start reading right now.

The story begins on a hot summer night, when a scientist from the Centers for Disease Control is kidnapped by unknown assailants in a parking lot. Authorities are desperate to find them, but the doctor appears to have vanished. One month later, on a peaceful Sunday afternoon, a bomb goes off in the Atlanta neighborhood that houses Emory University, two hospitals, the FBI headquarters, and the CDC. Will, an investigator with the Georgia Bureau of Investigation, and Sara, a medical examiner rush to the scene — and straight into a dangerous conspiracy. When Sara is kidnapped, the stakes are raised, and Will must go undercover to save her and prevent the deaths of thousands of people.

In the excerpt below, Will and Sara deal with the aftermath of the explosion — and discover that something is very, very wrong:

Will almost lost his footing. He ran into the yard and looked up at the sky. A plume of dark smoke curled up behind the tree line.

“Let’s go,” Will started running toward the driveway.

"Sara!” Cathy called from the back door. “Did you hear that?”

He watched Sara dart into the house. She was probably looking for her keys. He wanted her to stay inside but knew she wouldn’t.

Will darted across the sloping front yard. The police would set up roadblocks. There would be nowhere to park a car and Will could probably run there faster. He thought about his gun locked in the glove box of Sara’s BMW, but if the local cops needed him for anything, it would be crowd control.

There would be nowhere to park a car and Will could probably run there faster.

Will’s foot hit the road just as the wail of an emergency siren filled the air. He was almost at the bend when he heard another sound. Not an explosion, but the weird pop that two automobiles make when they smack into each other. There was another pop. He gritted his teeth as he waited through the ensuing silence. A car horn started to whine along with the emergency siren.

It wasn’t until Will had finally rounded the curve that he saw what had happened: two cars had marshmallowed a blue pick-up truck between them.

A red Porsche Boxter S was at the front. The trunk had popped open. The driver was slumped at the wheel, pressing the horn with his face.

A Ford F-150 was behind it. The doors must’ve crumpled on impact. One man was trying to climb out the open window. The other was leaning against the hood, blood dripping down his face.

A silver Chevy Malibu brought up the rear. Driver in front, two passengers in back, none of them moving.

Will’s hard run downshifted to a jog, then he, too, came to a standstill.

Birds chirped in the trees. The smallest of breezes rustled the leaves. The smoke was coming from the Emory campus. Students, staff, two hospitals, the FBI headquarters, the CDC.

He startled. Sara had pulled up alongside him.

She said, “I can triage them, but I need your help.”

He had to clear his throat to bring himself back into the moment. “The driver in the Porsche looks bad.”

Sara got out of the car. “Gas is leaking under the engine.”

She ran to the Porsche. The driver was still collapsed over the steering wheel. The windows were up. So was the convertible top.

Will unlocked the door. Sara took a few seconds before she started shaking her head. “His neck’s broken. He wasn’t wearing his seatbelt, but it’s weird.”

“They weren’t going fast enough for this kind of injury.” She shook her head again. “It’s not making sense.”

Will looked at the skid marks on the road. They were short, indicating the Porsche been going at a slower rate of speed. He rubbed his thumb on his shirt. The ignition key had been sticky with blood. So was the inside door handle, though there wasn’t much blood anywhere else. Papers were scattered in the front seat.

“They weren’t going fast enough for this kind of injury.” She shook her head again. “It’s not making sense.”

“Ma’am?” The driver from the F-150 was standing behind the Porsche. He was a prototypical hillbilly, with long stringy hair and a ZZ Top beard, the kind of guy who drove down from the mountains every day to build decks and hang drywall. His fingers were pinching part of his scalp together. “Are you a nurse?”

“Doctor.” Sara gently moved his hand so she could examine him. “Are you feeling dizzy or nauseous, mister—"

Will looked down at the asphalt. There was a trail of blood between the truck and the Porsche. So, Merle had checked on the driver, then he’d gone back to his truck. There was nothing suspicious about his actions. Then again, Sara’s intuition was generally reliable. If she thought something was off, then something was off.

So, what was Will missing?

He asked the passenger of the truck, “What happened?”

“Gas main exploded. We got the hell outta there.” He was redneck straight out of Lynyrd Skynyrd. Will could smell the cigarette smoke wafting off of him from ten feet away. The guy motioned toward the Malibu. “It’s them people there you should be worried about. Guy in the back seat ain’t lookin’ so good.”

Sara was already heading toward the sedan. Will followed, though she didn’t need his help. Her suspicion had set off his internal alarm. He looked up and down the street. Some of the neighbors were standing in their doorways, but no one was approaching the scene. Smoke from the explosions had tinged the air with a charcoal odor.

“My friend needs help.” The driver of the Chevy Malibu stumbled as he got out of the car. He was wearing a blue security uniform from the university. He opened the back door. One of the passengers was slumped in the backseat. He was wearing the same blue uniform.

Her suspicion had set off his internal alarm. He looked up and down the street.

The Chevy driver told Will, “Gas main exploded at one of the construction sites.”

“I dunno, man. Maybe something else blew. The entire site evaporated.”

He shook his head. “Contractors don’t work on the weekends, but they’re evacuating the entire campus just in case. It’s mayhem back there.”

Will didn’t ask the Emory security guard why he wasn’t helping evacuate the campus. He checked the horizon. The single pillar of smoke had taken on a strange, navy color.

“Sir?” Sara was kneeling at the open car door so she could talk to the man in the backseat. “Sir, are you okay?”

Will raised his chin in acknowledgment. He could finally hear squad cars barreling down Oakdale Road, which ran parallel to Lullwater. A white air ambulance helicopter raced overhead. In the distance, fire engines bleated their horns. There must’ve been another accident at the Ponce de Leon end of Lullwater. There was no telling how many people had slammed on the brakes when the explosions started.

So, why did this particular car accident feel different?

“Dwight?” Sara pulled the man up to sitting. The windows were heavily tinted. Over the top of the door, Will could see Dwight’s head loll to the side. The whites of his eyes showed like bone under his swollen eyelids. Blood dribbled from his nose. He hadn’t been wearing a seat belt, either. He’d probably knocked himself out on the seat in front of him.

“We need to get him out of here.” Clinton’s tone had changed. He sounded scared now. “Get him to the hospital. Emory’s closed. The emergency room. Everything’s closed, man. What the fuck are we going to do?”

Will put a steadying hand on Clinton’s shoulder. “Can you tell me exactly what happened?”

“I done told you!” The man’s arms flew up, shirking Will’s hand away. “Do you see that smoke, bubba? Shit’s going down, is what’s happening. And now this car wreck and none of us can get out of here. You think they’re gonna send an ambulance for my pal? You think the cops are gonna arrest me for whacking into that stupid truck?”

“Clinton, it’s nobody’s fault,” another voice said. The second passenger from the back seat. Mid-thirties, clean shaven. T-shirt and jeans. He had his hands clasped together on the roof.

Will could feel the danger radiating off this guy like heat from the sun.

What was he missing?

You weren’t that calm unless you felt like you were completely in control.

Hank said, “We heard another explosion, then the guy in the red car just stopped.” He snapped his fingers. “Then the truck hit the red car. Then we rear-ended the truck and—"

“Will?” Sara’s tone had changed, too. She was holding out the keyfob to her BMW. Will caught a slight tremble in her hand. She had worked in emergency medicine for years. She never got flustered.

What was he missing?

She told him, “I need you to get my medical bag out of the glove compartment of the car.”

Will caught a slight tremble in her hand. She had worked in emergency medicine for years. She never got flustered.

Merle offered, “I can get it.”

Will took the fob. His fingers brushed against Sara’s. He felt a jolt of panic as his brain processed her very specific request.

Sara kept her medical bag in the trunk because the glove box was too small. And also because that was where Will locked his gun when he wasn’t wearing it.

She wasn’t asking him to get her bag.

She was telling him to get his gun.