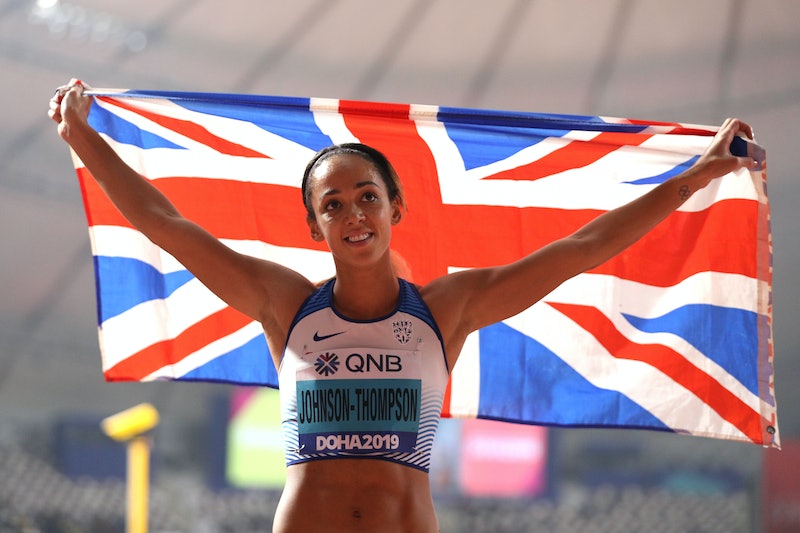 The Athletics World Championships are currently taking place in Doha. This meet, in particular, has been the most phenomenal display of female talent, Allyson Felix became the most decorated track athlete 10 months after giving birth, Shelly-Anne Fraser won the 100m title two years after having her son Zyon and, of course, the MVP Dina Asher-Smith smashed the 200m. But it seems that the good news for female athletics doesn't stop there because Katarina Johnson-Thompson has broken the British record.

On Thursday, Johnson-Thompson took gold in the World Championships heptathlon beating defending champion Nafi Thiam by 304 points. This is a pretty big deal for Johnson-Thompson because the win is her first outdoor global title. At the end of the competition, she finished on a whopping 6,981 points breaking Dame Jessica Ennis-Hill's record of 6,955 which has been standing since London 2012. Johnson-Thompson told BBC Sport "this is the result of so many attempts of trying to perform on this stage. The low moments have helped me come back and look at myself. This has been my dream. It has been such a long road. I am just happy that I'm coming into my best in these two big years. I just want more." Get it, girl.

This was really the athletics meet of Johnson-Thompson career, as she achieved a number of personal bests for her show-stopping performance. Sky reports that on the first day of the heptathlon Johnson-Thompson got personal bests in both 100m and shot put then achieved a whopping 6.77m in the long jump. She then achieved another personal best in the javelin throwing 43.93m. Speaking during the BBC's coverage of the event Ennis-Hill, who previously held the record, said: "to come back and deliver in this way with all these personal bests is incredible. You have to get to the lowest point, the breaking point. She got to that and she made big changes and decisions and they are the reason she has gone on to improve and become the world champion now." You know what they say, "cometh the hour, cometh the (wo)man."

But Johnson-Thompson hasn't always had the easiest run (pardon the pun) when it comes to her career. Like many of us she has suffered from impostor syndrome, telling The Guardian earlier this year: "I was reading up on impostor syndrome the other day. My mum sent me an article on it because when she was a dancer she felt the same. "She continued: "I don’t know what it’ll take not to feel like that – I’ll just know when it happens. I know I’ve done good in the past couple of years and have turned a corner, but I still want more from myself. I want to reach my potential."

If anything can stop her from feeling like that (not that she ever should have previously), it's certainly her incredible victory at the World Championships. A new British record and a world title, there are certainly no impostors over here, she is a champion for sure.