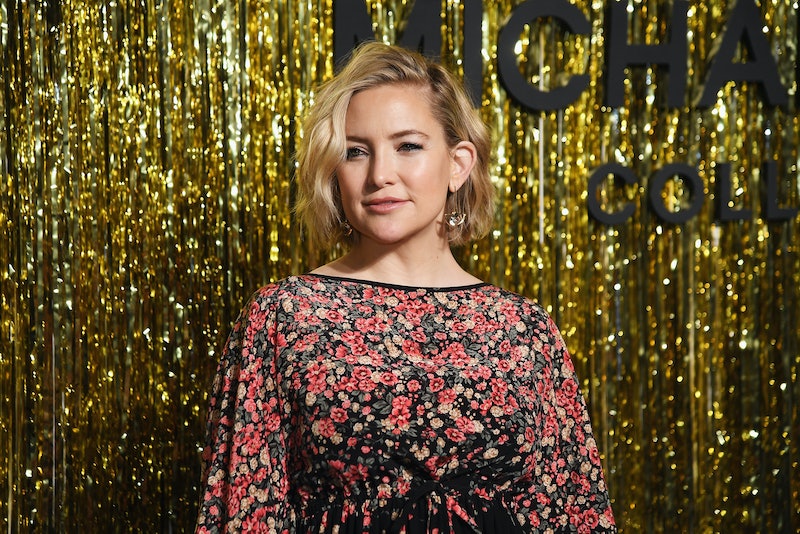 The Academy Awards are on Sunday, and celebrities are preparing for the big event in all kinds of ways — including belting out an Oscar nominated song. Kate Hudson sang "Shallow" ahead of the Oscars, and her voice impressed quite a few fans. The actor showed off her singing skills on Instagram, posting a video of herself singing the beautiful A Star Is Born track while doing Pilates. The star seemed to be multitasking ahead of the big event (which her post notes she'll be watching at home), getting in a workout and practicing hitting high notes. According to People, her longtime trainer Nicole Stuart coached her, and can be heard in the video asking if Hudson was focused. At one point in the video, Hudson said, "I think I hit the note!" Stuart responded, "Why don't you hit the proper form, and then hit the note."

Hudson posted the whole hilarious exchange on social media, captioning the video, "Gearing up for my in-living room Oscar performance... apologies to @ladygaga and @iammarkronson for the lyrics" with a music note emoji. She also included several funny hashtags, writing, "#mommybrain #WasIINTheRightKey? #IReallyWasFocused #SometimesYouJustNeedToBeltItOut." "Shallow" is nominated for Best Original Song at the Academy Awards, and the song and workout combo was an appropriate way for Hudson to kick off the day.

Hudson's trainer also shared the funny video to her own Instagram page, writing, "Just another normal #friday #pilates session with the #multitalentedmultitasker (say that 3 times fast) @katehudson. I love how my life never gets dull!"

In the comments on Hudson's page, many people were shocked by the actor's secret singing talent. Katy Perry wrote, "let me produce ur debut record." Hilary Swank commented, "Omg! I thought that was Lady Gaga singing while you did Pilates but it was YOU! Insane voice, gurl!!! You should absolutely be singing...but not only at Pilates, make an album!!" Many other celebs loved the funny video as well, with Hailey Baldwin writing, "didn't think it was possible for me to be more of a fan, and yet here we are..." and Reese Witherspoon also chimed in, commenting "The lyrics" with the laughing and crying emoji.

Even though she seems to be planning to watch the awards from home, the actor shared more pre-Oscar updates on social media. Hudson shared a photo in an old-fashioned car with her mother Goldie Hawn on Instagram. In the photo, both stars are still wearing workout clothes and wave for the camera. The photo was captioned, "It's not what you wear, it's how you wear it! Oscar drop off @officialgoldiehawn #Hoodiefashion #Coolestdriverintown".

It's been an eventful year for the star, who welcomed her third child Rani Rose Hudson Fujikawa in October, as reported by ET Online. The actor has two other kids — a 15-year-old son named Ryder and 7-year-old son Bingham. Rani is her first child with boyfriend Danny Fujikawa. The star announced her daughter's birth on Instagram writing, "Everyone is doing well and happy as can be. Our family thanks you for all the love and blessings that have been sent our way and we send ours right back."

It seems like the Oscars are going to be a night in with the family for Hudson, and it's no secret what part of the awards she will be most looking forward to. When it comes time for Lady Gaga and Bradley Cooper to perform their duet of "Shallow", Hudson, like many A Star Is Born fans, will be singing along at home.