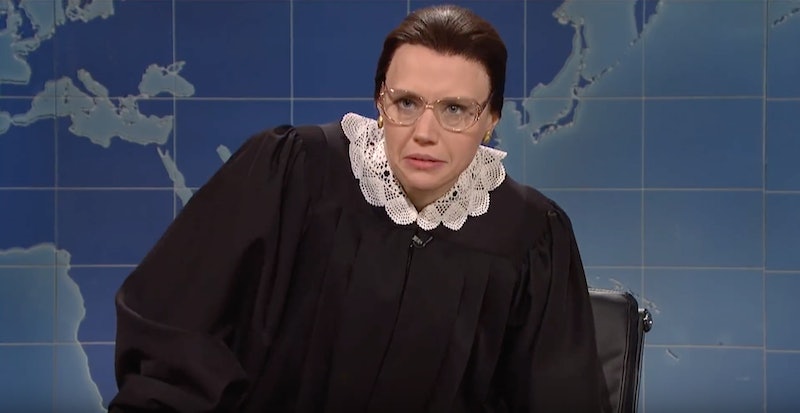 Some chance meetings are complete fate, others are totally random. The night that Kate McKinnon finally met Ruth Bader Ginsburg, whom she famously parodied numerous times on Saturday Night Live, was probably a little bit of both.

The unexpected encounter between the OG of the Supreme Court and the Saturday Night Live scene-stealer went down behind-the-scenes of an Off-Broadway performance of Fiddler on the Roof in Yiddish, a very random yet fitting setting for their first meeting. Both of them were in attendance on Tuesday, Aug. 13, a likely unplanned coincidence that everyone should be grateful for. Luckily for everyone that wasn't at the show, audience members and cast members captured the dream duo's adorable moments on camera.

According to audience footage posted by Twitter user @Leezard3, McKinnon seemingly arrived at the theater first, then joined the audience in giving RBG the applause she deserves once she entered the room. The judge actually sat behind McKinnon for the performance, but at one point, the comedian turned around and introduced herself properly, shaking hands with the judicial icon, as seen in a fan photo posted by @spinstripes on Twitter.

Obviously, the cast members of Fiddler On the Roof were completely over the moon that both Ginsburg and her doppelgänger were in attendance that night. They both went backstage after the show to meet the performers, and more importantly, take pictures with each other, and according to the cast, their meeting was utterly epic.

"One of the evening’s highlights was watching the SNL RBG meet the real RBG," cast member Bobby Underwood said on Instagram. "The two of them had never met before, and Ruth said to Kate, 'I’ve seen you before.' Kate responded 'I’ve seen you before too' and doubled over, overwhelmed. She was as starstruck as we were. Also, Kate McKinnon put her face on my face. So I’m pretty sure that means we’re married now." Sounds accurate to me.

Cast member Bruce Sabath was also understandably starstruck. "It’s hard to describe what an honor it was to perform @fiddlernyc for this woman, who is, without exaggeration, a national treasure," he gushed over Ruth Bader Ginsburg. "I honestly don’t know how they let her go out without being surrounded by bubble wrap. And to see her meet her comic doppelgänger, @katemckinnonofficial was beyond. Good night."

RBG has become one of McKinnon's most famous characters on SNL, for her fabulously exaggerated and high-key feminist take on the beloved justice. Although they had never met before yesterday, Ginsburg has previously expressed support of McKinnon, saying in January 2018, “I liked the actress who portrayed me and I would like to say 'Ginsburned!' sometimes to my colleagues." She's referring to the comedian's slogan that she uses whenever she calls someone out for being, well, not up to her high intellectual standards. (Frankly, it should be apart of everyone's daily vocabulary.)

McKinnon's impressions of Ginsburg are utterly priceless, and so is this moment between the two powerful women. Now that they've met, hopefully this means fans can expect a double Ginsburg appearance on Saturday Night Live's next season.