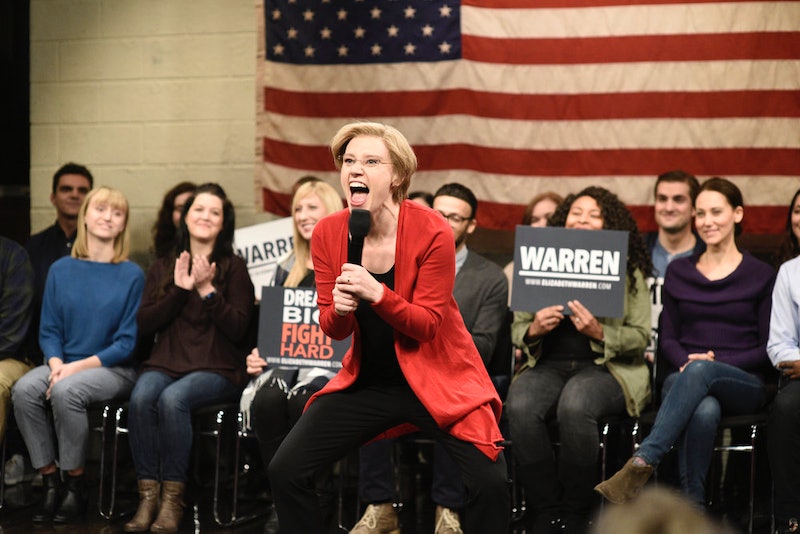 Spoilers ahead for the Nov. 2 episode of Saturday Night Live. The cold open of SNL's Nov. 2 episode featured Kate McKinnon reprising her Elizabeth Warren impersonation to make a funny yet important point about healthcare. When McKinnon, as the presidential candidate, took questions from the crowd, newcomer Chloe Fineman said she was nervous about switching from her current healthcare plan to Warren's proposed universal coverage. "My current insurance isn't perfect, but with your plan, I'd have to give it up," Fineman's character lamented. "And that makes me nervous!" The senator, in turn, compared the woman's current plan to a deadbeat guy.

"I hear this from a lot of people, so let me help you understand: Your insurance is like a bad boyfriend," McKinnon said in an impressively Warren-like cadence. "Girl, listen to me: You need to leave him! He's draining you! You deserve better! Dump his ass!" As the presidential candidate began this impassioned speech, the music began to swell, and the audience member began crying. "You're right, I'm settling!" she whined. "But I'm just scared to leave, because what if it's the best I can get?"

After learning that the woman's deductible was $8,000 (and didn't even include dental), Warren responded, "O.K., listen to me, you beautiful bitch. Here's what's going to happen: You're going to call him, and you're going to end it. And I'm going to come right over with an apple strudel."

McKinnon has always been a dynamite celebrity impersonator and has embodied everyone from Hillary Clinton and Jeff Sessions to Kellyanne Conway (which she also reprised this episode), and even the German chancellor Angela Merkel. So naturally, SNL fans were happy to see the comedian bring back Warren — especially with the spunky, high-school-debate-mom-energy she brings to the role.

Fortunately, the topic of healthcare is Warren's "Despacito," according to the sketch, so she was more than eager to explain her plan. She revealed a complex chart filled with hard data. "Do you understand this?" she asked the audience, referring to the board. "I do. I could explain it to you, but you'd die."

In addition to the healthcare jokes, there were also several jabs at the other presidential candidates. One question asker said that she worked for Kamala Harris's campaign but was still undecided. What's more, Warren commented on Beto O'Rourke pulling out of the presidential race by saying, "Let me know how my dust tastes, all right?" As for Joe Biden, she said, "My plan compares favorably [to his] in that it exists."

McKinnon's impressions are always a welcome part of any episode of SNL, but this week's Warren took it one step further. Fortunately, fans can doubtless look forward to more of the comedian's impressions — as long as Warren stays in the presidential race, at the very least.

More like this
Pedro Pascal Barely Got Through The "Lisa From Temecula" 'SNL' Sketch
By Stephanie Topacio Long
Michael B. Jordan Tackled His "Public Breakup" With Lori Harvey On 'SNL'
By Brad Witter
Who Is Pete Davidson Dating? He & Chase Sui Wonders Got Caught Kissing
By Jake Viswanath
Twitter Has Renamed Ekin-Su After *That* 'Dancing On Ice' Performance
By Sophie McEvoy
Get Even More From Bustle — Sign Up For The Newsletter
From hair trends to relationship advice, our daily newsletter has everything you need to sound like a person who’s on TikTok, even if you aren’t.