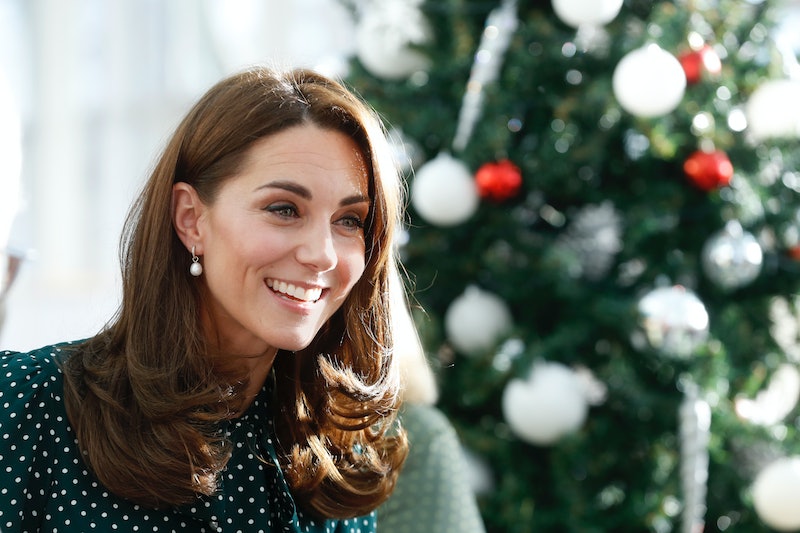 It's pretty common practice for couples to take turns spending the holidays with each of their families. Even Prince William and Kate Middleton have rolled like that in recent years, but it seems as if that's about to change. On Dec. 20, a source for Us Weekly revealed that Kate Middleton is reportedly spending Christmas with the royals this year, and she's likely to do so for the foreseeable future. She'll still get to hang with her side of the family later on, of course, just not on Christmas Day.

After they got married back in 2011, William and Kate spent their first Christmas as Mr. and Mrs. with the royal family at Sandringham. In 2012, though, the couple broke royal protocol —  "with the approval of the Queen and the Duke of Edinburgh," as per The Telegraph — by opting to get merry with the Middletons instead.

Once Prince George was born in 2013, William and Kate decided to start a new tradition. They'd continue to show up for the royal family's Christmas appearances, but instead of staying at Sandringham, they'd stay at their own place with the Middletons nearby in Norfolk.

Now, it seems as if their holiday plans are changing yet again. The aforementioned source for Us Weekly recently said, "moving forward, Kate and William will continue to do Sandringham every Christmas Eve and Day as opposed to alternating like they used to."

But don't worry — there's no drama. They're not getting banned from hanging out with the Middletons or anything like that. Us Weekly's source noted that William and Kate will "visit the Middleton in Berkshire later in the festive season." What is the "festive season," exactly? No clue. Maybe like, now through New Year's? Regardless, Kate's family will definitely get to see the couple and their kiddos at some point.

If you're wondering why they're changing their plans, the reason behind their Christmas-time switch-up is actually pretty sweet. According to Us Weekly's "insider" source, William and Kate have likely decided to spend the holidays at Sandringham so that they can get in some quality time with the Queen and Prince Philip.

"With the Queen and Philip’s advancing ages, skipping years isn’t an option anymore," the source claimed. That totally makes sense, seeing as how William's grandparents are 92 and 97, respectively. Everything starts to get a little more difficult once you've been around for nearly a century, so having everyone in the same place just makes Christmas that much easier.

Christmas at Sandringham is jam-packed with royal traditions, so hopefully William, Kate, and the kids have all been resting up before the festivities begin. There's a soccer game on Christmas Eve, as well as a formal tea time, which is when the family exchanges gifts.

Then there's two church services on Christmas Day, one public and one private. Following those, they all sit down for lunch and feast upon "salad with shrimp or lobster, and a roasted turkey, and all of your traditional side dishes like parsnips, carrots, Brussels sprouts and Christmas pudding with brandy butter for dessert," according to Good Housekeeping.

So, while Kate won't be with her parents this year on Dec. 25, she'll definitely be surrounded by a ton of loving in-laws. Besides, with three little kids and all those royal traditions, the holidays will fly by.