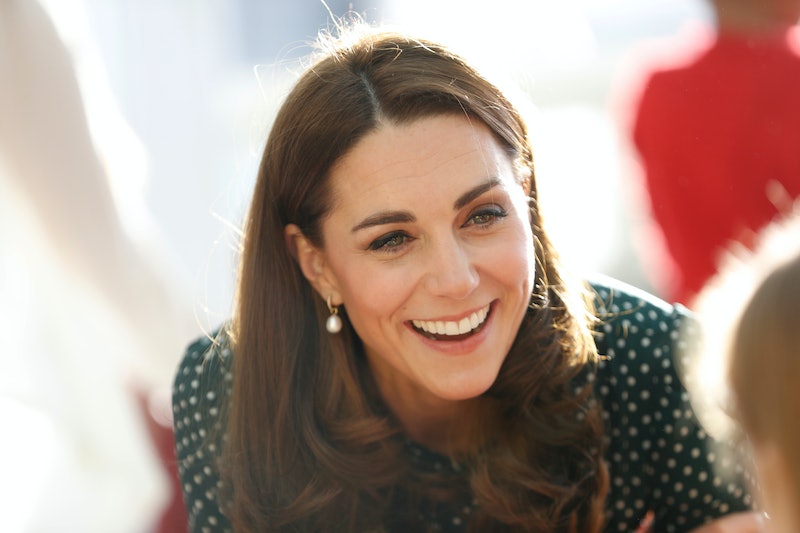 Ah, the department store. Places you used to dread being dragged to as a kid (unless the toy section was lit AF) that turn into a literal haven as an adult. While the high street offers an abundance of choice, if you're looking for a strange but wonderful variety of products The Range is where it's at. I mean, where else can you spruce up your bathroom with nautical knick-knacks and release your inner arts and crafts goddess? Well it looks like the royals agree with that sentiment too, as Kate Middleton was spotted visited The Range with Prince George and Princess Charlotte in the run up to Christmas.

According to the Daily Mail, Middleton was spotted by regular shoppers at the King's Lynn branch in Norfolk on Sunday (Dec. 23), which is close to Sandringham estate where Middleton and the majority of the royal family will be on Christmas Day. While George was apparently enamoured by some dinosaur slime, Middleton was focused on purchasing some pictures, children's books, and arts and crafts items as The Sun reported.

"I recognised little Prince George holding Kate's hand and Charlotte with a red bow in her hair," a customer told the newspaper. "Their protection officers were keeping a discreet distance so they looked like any other family out grabbing last-minute Christmas bargains," they added.

It's nice to see that Middleton is standing by the seemingly British tradition of taking your kids on a trip out to the department store on a Sunday. I have so many good memories of me and my brother goofing around in the different sections while our parents were aimlessly looking around and never actually planning on purchasing anything.

Middleton did though, and some of these items could include some infamous gag gifts that the royals are reportedly known for giving each other on Christmas Eve, according to The Mirror. "During the afternoon family members creep down to secretly place their gifts in [Sandringham's red drawing room], where trestle tables are laid out and sections marked off to show where each family member's presents should be," the newspaper reported.

"The rule is that no-one should open their present until given permission by Philip, who supervises the proceedings, and that every present should be a cheap 'joke gift', and the cheaper the better." In my personal experience The Range has a plenty of fantastic cheap joke gifts to have the family in hysterics, so I can imagine that Middleton had plenty to choose from during her visit.

And if it's anything like her past gifts, she's deffo going to slay it. Middleton apparently gave Prince Harry a "Grow-Your-Own-Girlfriend" kit during his bachelor days, while Harry reportedly gave his grandmother a bath hat adorned with the saying "Ain't life a b*tch". Then there's the sibling love between Prince Charles and Princess Anne, where Anne reportedly gifted Charles a white leather toilet seat that he still uses to this day when on tour. I can't.

Oh, what I would give to be a fly on the wall in Sandringham on Christmas Eve.