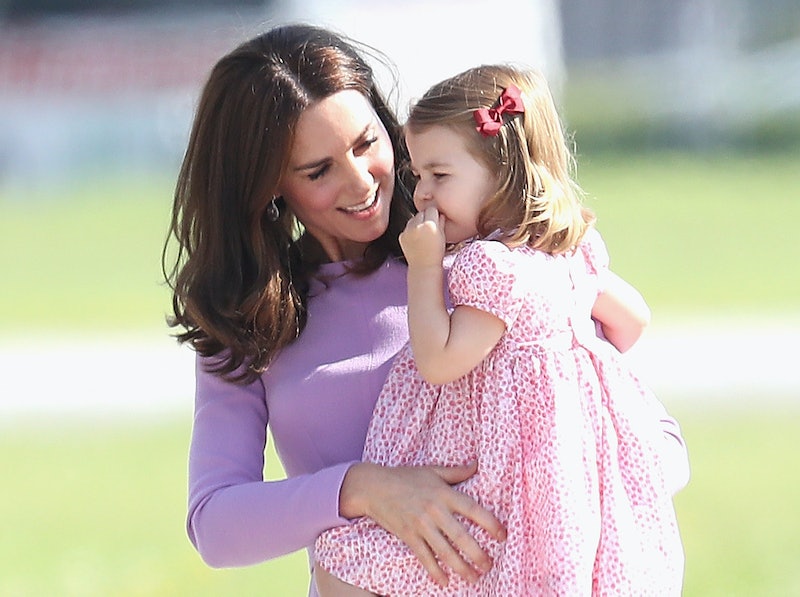 Prince George and Princess Charlotte can totally hold their own in the kitchen, based on Kate Middleton's latest comments about their cooking skills. According to People, Middleton revealed George and Charlotte's favorite foods during her Feb. 5 visit to Lavender Primary School in honor of Place2Be's Children's Mental Health Week. The Duchess of Cambridge also reportedly said that her children are more than apt to help her out in the kitchen to cook some of those dishes.

People reported that Middleton learned about the effect that food can have on kids' physical and mental well-being during her visit to the school. At one point in the discussion, the mom-of-three told the students about some of her children's food habits, including a surprising food that Charlotte's fond of. The publication reported that she revealed, “Charlotte loves olives." Well, you can definitely say that the princess has a very refined palate. Apparently, its one that she inherited from her mom, as Middleton revealed in January 2018 that she also loves to eat olives, per Hello! Magazine.

Matthew Kleiner-Mann, the chief executive of the Ivy Learning Trust, the organization that runs Lavender Primary School, told reporters at the event that the Duchess of Cambridge had even more to say about her children's love of cooking. “She was telling us how much her children love cooking and how they cook for her,” he said, per People, "They made cheesy pasta the other day. One stirs the flour, one puts the milk and butter in. And they make salads and stuff.” He added, about the duchess, “Food is important to her and she understands the links between mental health and physical exercise.”

This cheese pasta anecdote about the royals is not only adorable, but it's also pretty fun. To add to all of that fun, their preference for the pasta actually has a surprising connection to a Bachelor Nation fave. That's right, if you're a Bachelor fan, the whole "cheese pasta" thing should sound incredibly familiar, since it was the favored meal of Season 21 star Corinne Olympios.

The reality contestant was such a fan of cheese pasta (or, as it's commonly referred, mac and cheese) that she even served the dish at the Women Tell All special during the season, per Refinery29. Anyone else craving cheesy pasta all of a sudden?

But, back to the other cheese pasta fans. The royals don't just love olives and the Bachelor-approved meal, of course. George and Charlotte are also fond of pizza, especially pizza that they make themselves. According to Hello! Magazine, Middleton spoke about her children's fondness for the classic dish in March 2018.

The Duchess of Cambridge was visiting the St Luke's Community Centre, during which she helped prepare food for the Commonwealth Big Lunch event. Middleton spoke with one of the community members there and revealed, "I was just saying how I really enjoy making pizza dough with George and Charlotte because they like getting their hands messy." Sounds like the royal siblings totally like to have fun in the kitchen.

Whether George and Charlotte like to snack on some olives, cook up cheese pasta, or even make their own pizza, it's clear that Middleton's children are already turning into proper foodies.