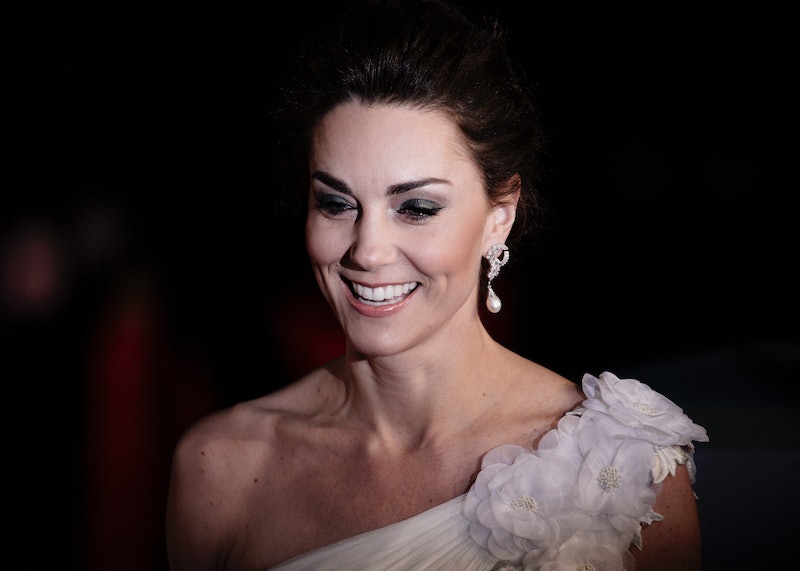 When celebrities and their stylists make final decisions on an outfit, the looks chosen can leave fans wondering what prompted the style decision. Case and point: Kate Middleton wore a pink and white dress that made her look exactly like Sleeping Beauty. Seriously, the dress just has to be an inside princess joke that the rest of the world may not be in on.

A real-life princess donning the looks of fictional princesses is a literal dream come true for both Disney and royal family fans alike, and Middleton appeared to be the spitting image of Aurora. The Duchess of Cambridge stepped out in a pink, purple, and white chiffon gown to attend the 100 Women Finance Gala Dinner at the V&A. Not only are the color schemes of both the Duchess and Princess Aurora's dresses basically identical, but even the way the gown is layered and designed looks so similar.

To make this Freaky Friday princess moment even freakier, Middleton also wore her hair clipped up in the same way Aurora did when she knocked out. If the Duchess just closed her eyes and laid still with nothing but a rose in hand, she's winning at Halloween, like, way in advance.

Just looking at the way Middleton's physical gown and Aurora's animated gown in Sleeping Beauty hangs off the shoulder is the same. It's weirdly spot on and the perfect replica.

Bringing all of the sparkles together from her head to her toes, the Duchess opted in for a pair of pink drop earrings from London designer Kiki McDonough. Interestingly enough, they're the exact same pair of double drop earrings Middleton wore to her sister Pippa's wedding back in May of 2017.

Unsurprisingly, the earrings are no longer being sold online, but there are a plethora of similar plush pink styles on the site.

During the gala, the mom of three also wore a pair of sparkly pointed pumps to complement the bling hanging from her ears as well as a burgundy velvet clutch to go with the matching velvet belt built into the dress.

According to Harper's Bazaar, the dress Middleton wore to the gala was a Gucci gown while her deep red clutch is brought to you by Prada. It's hard to think about a fictional princess wearing brands, but for a real-life princess, it's totally on brand.

It feels as though Middleton has only been a part of the royal family for a short time, but she's sprouted into a fashion icon. Earlier that day, the Duchess had received praise for her fashion, wearing a tweed skirt suit that would give a vintage Barbie doll a run for her money.

The Disney princesses that many young adults grew up with were style icons the minute they appeared on screen after pressing play on the VHS tape. Luckily, social media exists in the present and even real-life princesses make it onto the best dressed list. Now, there's only the matter of deciding which princess wore it best, but you can be the judge of that.