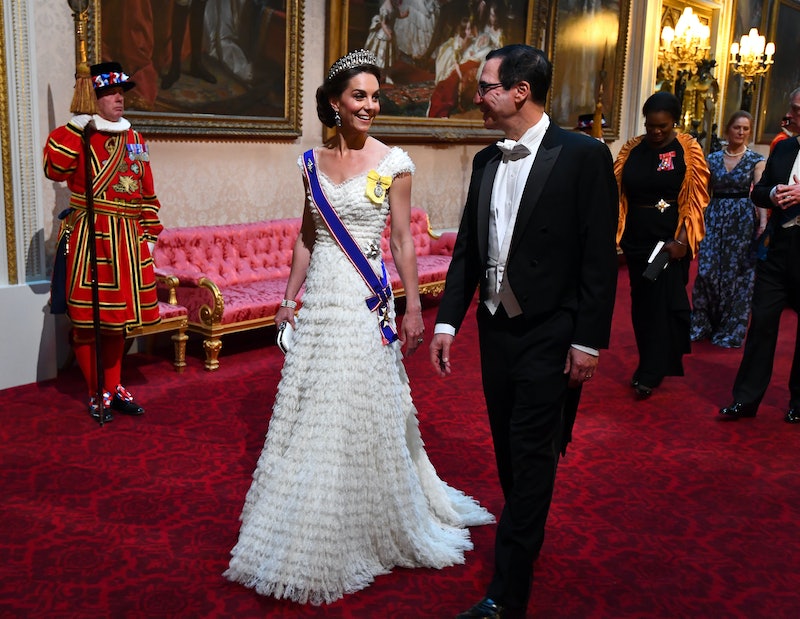 If there's one thing to be most excited about when it comes to a royal state dinner, it's waiting to see what the Duchess of Cambridge will wear. From what designer she will choose to what royal jewels she'll pair with her gown, the suspense before she walks through the corridors of Buckingham Palace to the dinner is always palpable. Well, Monday night's (June 3) dinner certainly didn't disappoint, as Kate Middleton's state banquet outfit was absolutely stunning, and included one of her favourite British designers.

Designed by Alexander McQueen, Middleton wore a floor-length ruffled white gown coupled with the Cambridge Lover's Knot Tiara and the Queen Mother's sapphire and diamond earrings. As Town & Country notes, the Lover's Knot "was created for Queen Mary in 1914 by the House of Garrand" which was then passed down to Queen Elizabeth II in 1953 after her grandmother's death. And while Princess Diana didn't wear the famous tiara for her wedding in 1981, "the Lover's Knot became one of her favourite pieces, despite being so heavy that it hurt her head."

The Duchess last wore the tiara during a state banquet with King Willem-Alexander and Queen Maxima of Holland last October, where she also wore another dress designed by McQueen. Looking back at that beautiful outfit, you'll notice that this time around Middleton now has a royal blue sash draped over her right shoulder. This is the Dame Grand Cross of the Royal Victorian Order, which the Queen appointed the Duchess in April. As Harper's Bazaar reports, this honour is "the highest ranking of chivalry which the Queen personally awards in gratitude for service of the sovereign."

If you look at the bottom of the sash, as royal correspondent Omid Scobie pointed out in a tweet, you will also see the Maltese Cross which is "the symbol of the Royal Victorian Order," and different sizes are given "depending on which of the five rankings the holder is at." Monday night (June 3) was the first time that Middleton wore the sash since being appointed as a GCVO.

Middleton could also be seen wearing a yellow ribbon on her left strap, which is known as the yellow ribbon of the Royal Family Order. As Harper's Bazaar reported in 2018, it seems that the Duchess was given this honour in 2017 as editor of Majesty magazine Joe Little also wrote in a tweet that the first time Middleton wore the ribbon was at the Diplomatic Corps reception in December 2017. With a similar sentiment as the Dame Grand Cross, the Royal Family Order is "given by the Queen at her discretion to members of the royal family as a reward for their service." The ribbon is only "given to the female members of the British monarchy," as Vogue points out.

The ribbon of the Royal Family Order "is only worn on formal events" according to Harper's Bazaar, along with the Dame Grand Cross of the Royal Victorian Order — so expect to see Middleton wearing both the sash and the ribbon at every future formal royal event.