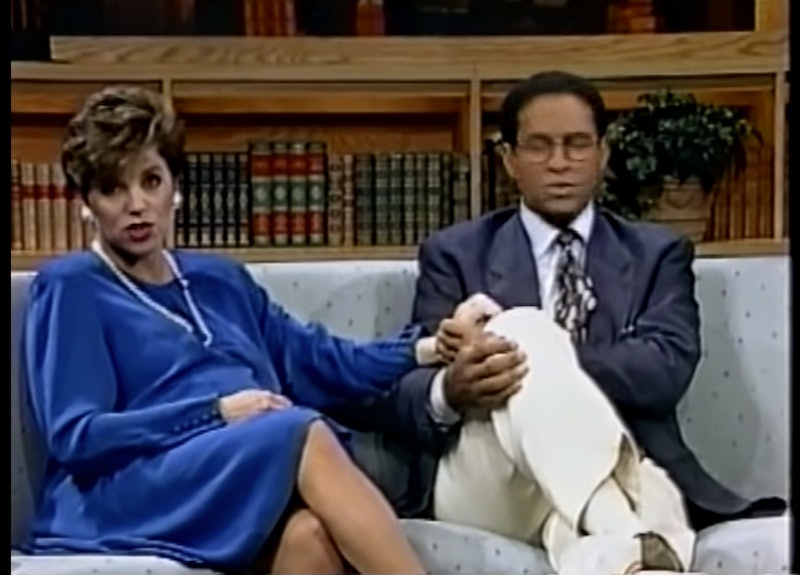 Over the course of her 40-year career in television news, Katie Couric has sat across from hundreds of people. Meaning it's more than likely that she's had at least a few awkward exchanges on live TV. In fact, she recently highlighted one particularly obnoxious conversation she had in the early 1990s with Bryant Gumbel, her then-Today show co-host. And the video of Couric discussing her maternity leave with Gumbel will have you cringing.

"I was about to go on maternity leave and let's just say, Bryant Gumbel didn't quite get it," the journalist and television host wrote in the latest issue of her Katie Couric Media Wake-Up Call newsletter, per AOL. "It's pretty shocking to watch it now, 28 years later!"

The clip opens with Gumbel asking Couric if she was "getting misty eyed yet" over her upcoming maternity leave. "Yeah, Bryant, I really am. I'm going to miss you terribly," Couric responds sarcastically, while laughing into a tissue.

"Why so long?" a seemingly incredulous Gumbel then asked, referencing Couric's decision to take nine weeks of maternity leave. "Remember the good old days, you know?"

"When they just squatted in those fields and just came right back into the house and cooked those men up a big ol' supper?" Couric asked.

"That's right," Gumbel said. "Get my vittles on the table!"

Gumbel appears to continue to mock Couric's decision to take maternity leave even as she moves to explain the body's need to rest and recuperate both before and after childbirth. "I'm going to relax for three weeks — as much as you can relax when you're carrying around 30 extra pounds," she said of the first three weeks of her maternity leave. "Then, hopefully I'll have the baby and everything. You know, it's a major shock to your body, I hope you realize, when you have a baby. And it takes a while to get back to normal and get on a schedule."

"Your ancestors didn't worry about that shock to your body," Gumbel said in response. "They came right back and worked."

"Do we have to do this in like a sexist debate," an uncomfortable-looking Couric asked, before bringing up the topic of paternity leave.

Later in the segment, Gumbel argued that "the guys have the harder part" when it comes to family and kids. "There's two rules you've got to remember: Number one, the guy is always right," he said as Couric makes a gagging motion with her hand. "Number two, in cases where you think that's wrong, refer to rule number one."

The interaction apparently didn't sour the pairs' current relationship, which Couric described to USA Today as "very friendly." Couric went on to defend Gumbel's attitude in the clip as being "sort of in jest."

"In context of all the conversations these days it was interesting to watch," Couric said of the clip, per USA Today. "I think that times have changed so much, but I do think there's a lot of implicit bias against moms. I think it's important to make sure your employer is up on the times and that women aren't penalized, consciously or unconsciously when they have children."

Under current U.S. law, women are only guaranteed up to 12 weeks of unpaid leave following the birth or adoption of a child.