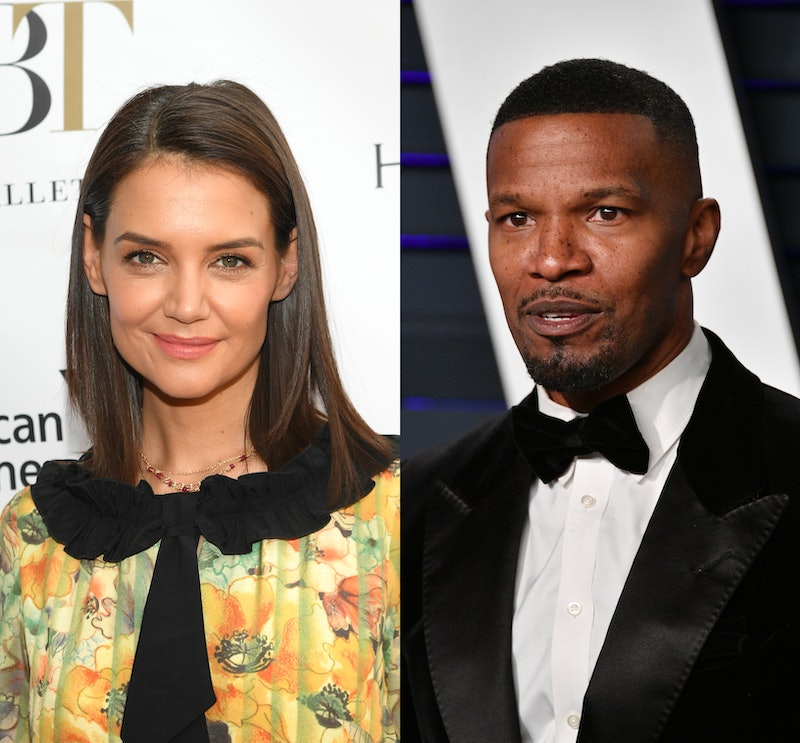 After a private six-year relationship, Katie Holmes and Jamie Foxx have reportedly split, according to several reports by outlets including In Touch Weekly, Us Weekly, and Page Six. According to Page Six, Holmes told a friend that the two haven’t “been together for months." Bustle has reached out to Holmes and Foxx’s reps for comment about the reported split, but did not hear back at the time of publication. As per Page Six, Holmes reportedly told a friend during dinner at La Esquina in New York, "What Jamie does is his business — we haven’t been together for months." The news comes on the heels of reports that Foxx had spent time with singer Sela Vave at a party in Los Angeles on Friday, Aug. 16. When photos of the two emerged, outlets began to speculate about the nature of Holmes and Foxx’s notoriously private relationship.

Holmes and Foxx have been linked since 2013, as per Harper’s Bazaar. In February 2015, both actors were photographed holding hands for the first time, but neither officially confirmed their relationship. At the time, Us Weekly reported that the singer has been spending time with the Dawson’s Creek alum since they were spotted dancing together in the Hamptons in 2013, following Holmes’ divorce from Tom Cruise in 2012. “Jamie is someone she can trust and have fun with,” a mutual friend of the two told Us Weekly at the time. “She’s getting everything from Jamie that she didn’t get with Tom.” The source added that Foxx had taken to calling Holmes “my girl.”

In June 2018, the couple faced breakup rumors when Radar Online reported that the two officially split after five years together. The publication claimed that Holmes “just couldn’t get over her trust issues.” However, Holmes’ rep denied such rumors shortly after and told PEOPLE that the “Radar story is 100 percent untrue.” Since the report, the duo have been spotted together publicly at a pre-Grammy Awards gala and dinner dates around NYC. The two have also attended each others’ birthday celebrations throughout the years.

Holmes and Foxx were last seen in public together at the 2019 Met Gala back in May, where the private couple even posed for a joint photograph. A month prior to the Met Gala, an insider revealed to Us Weekly that the two had no plans to advance their relationship to the next stage. “Katie and Jamie live a very private lifestyle and intend to keep it that way,” the source said in an April exclusive. “They don’t plan on getting engaged anytime soon because they’re happy with how things are right now.” Another source at the time added that the two didn't want to "disrupt either of their families." Holmes has one daughter, Suri, from her previous marriage to Cruise, while Foxx has two daughters, Corinne and Annalise, from his previous relationships.

The split has yet to be officially confirmed by the couple's reps, but if the reports are in fact true, here's to hoping that Holmes and Foxx parted ways on good terms.