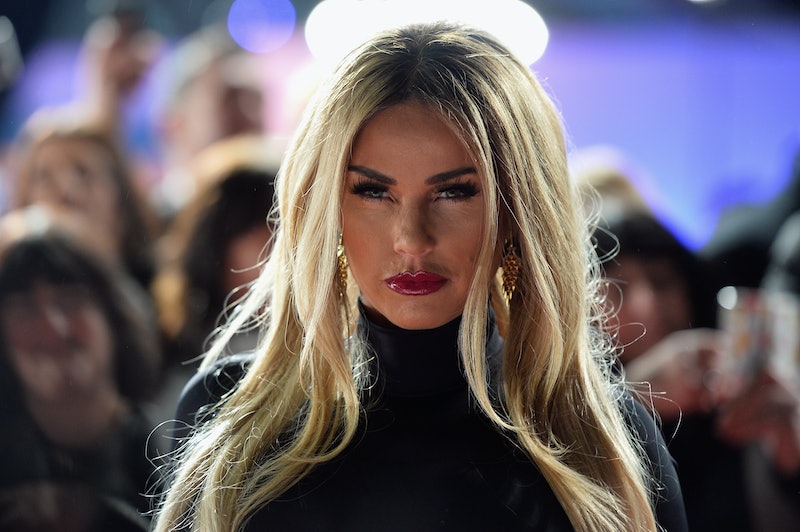 In an age where social media dictates so much of people's lives and algorithms make choices so you don't have to, many celebrities are using Instagram to make a bit of dough. But with regulations around what can and can't be posted being tightened all the time, the influencer game is changing. A recent example of this is a ruling from the Advertising Standards Authority banning sponsored posts from Katie Price, Lauren Goodger, and Georgia Harrison.

I reached out to Goodger's reps who said they have no comment on the matter. I've also contacted Price and Harrison's representatives for comment and will keep you updated should any new information become available.

The BBC reports that Price and Goodger have been putting their social media clout behind BoomBod, a product which claims to suppress your appetite in order to aid weight loss. Similarly Harrison has been promoting Protein Revolution and its V24 gummies which claim to prevent food cravings using "a vegetable extract."

The BBC reports that the Advertising Standards Authority (ASA) had concerns over a photo of Goodger promoting Boombod that appeared to have been edited in order to make her look thinner. The ASA ruled that that "the images were not representative of her real body shape." Price also promoted the product claiming it would lead to those who purchased it experiencing "quick and easy weight loss."

Harrison, of Love Island fame, suggested via her own Instagram account that the V24 gummies had "clinically proven" effects. The ASA's ruling determined that the sponsored posts contained no specific authorised health claims and that the claims that were made were so general as to be misleading. As per the ruling, the two posts which specifically mentioned weight loss in a short period of time were judged in breach of the code. The ASA's conclusions read: "Because the ads presented both influencers as aspirational figures, we were concerned that this created the impression that it was necessary or advisable for those who were already slim to use products that suppressed their appetite to quickly lose weight, which we considered was an irresponsible message in an ad for an appetite suppressant."

This move from the ASA is part of an increase in the level of scrutiny on influencer marketing and the effect that certain ads are having on social media users.

Back in September of this year Instagram announced tighter restrictions on posts which promote diet/weight loss products and cosmetic surgery procedures. At the time Instagram's public policy manager Emma Collins told The Guardian: "We want Instagram to be a positive place for everyone that uses it and this policy is part of our ongoing work to reduce the pressure that people can sometimes feel as a result of social media."

Instagram's tougher stance and the ASA's efforts to crack down on misleading advertising should hopefully make social media a more transparent place for users.

More like this
Here’s What TikTok's "Mascara” Trend Is *Really* About
By El Hunt
Ben & Jerry’s New Sundae Flavours Are A Chocoholic’s Dream
By Sophie McEvoy
What The UK Blocking Scotland’s Gender Recognition Bill Means
By Sam Ramsden
90 Epic Truth Or Drink Questions To Play 'Say It Or Shot It' With
By Bustle UK
Get The Very Best Of Bustle/UK
Sign up for Bustle UK's twice-weekly newsletter, featuring the latest must-watch TV, moving personal stories, and expert advice on the hottest viral buys.