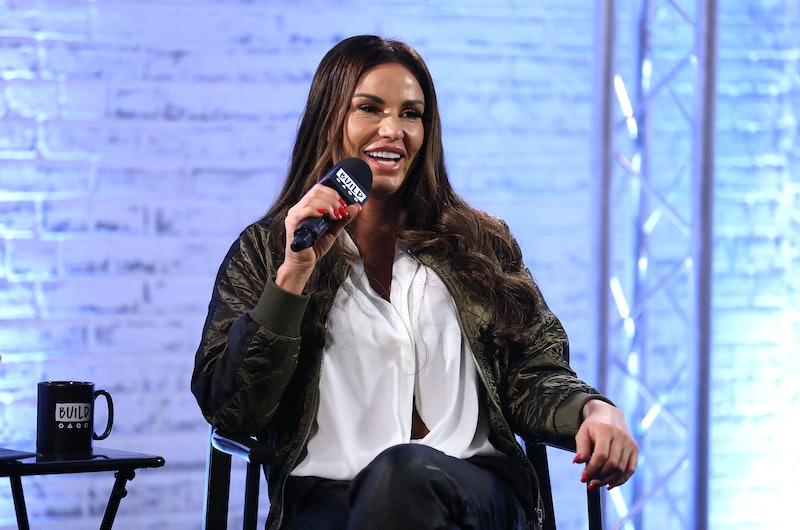 A campaign started by model and Loose Women panelist Katie Price to give disabled people protection under UK hate-crime laws has been backed today by parliament's Petitions Committee, the BBC reports. Price has been campaigning for this change for the last two years, gaining 200,000 signatures on an online petition she started after her son Harvey was made the target of severe online abuse. Price hopes to raise awareness about the mistreatment of disabled people online, and make it punishable by law.

According to the Parliament.uk, there are currently "no specific disability-related criminal offences" written into UK legislation. "There is only that potential increase in sentencing," the website states. Price began her petition to change this in 2017, the Guardian reports, and in Feb. 2018 she stood before parliament's Petitions Committee to argue for a change in the law, including the creation of a register that names the offending online trolls.

Speaking out about the abuse that her son (who is partially blind, autistic, and has Prader-Willi syndrome, the BBC states) has experienced online, Price revealed on ITV’s Peston on Sunday that “Harvey was getting racial abuse, they were mocking him, doing sex videos on him, putting him in t-shirts, and he's got complex special needs. I've got five children but they always pick on him.”

According to the BBC, MPs have now said that social media giants must “accept responsibility” over the abuse and that self-regulation has “failed disabled people.” Chair of the Petitions Committee, Labour MP Helen Jones, said:

“Harvey's experience is not unique. Social media is rife with horrendous, degrading and dehumanising comments about people with disabilities. The law on online abuse is not fit for purpose and it is truly shameful that disabled people have been forced off social media while their abusers face no consequences."

According to the Metro, during her Feb. 2018 speech to the Petition's Committe, Price said of her son:

"He’s so innocent, he wouldn’t even know how to hit back or defend himself. I don’t understand what goes through [the abusers'] minds to even want to do it. All he talks about is trains and frogs. Some people wanted to see how many retweets they got, how many people thought it was funny. If these people actually met him, they would want to cry. They would feel so guilty."

Price’s petition prompted many disabled people to speak out about their own experiences of abuse and trolling, the BBC says. Earlier today, Price posted on Instagram, saying: "The support has been unbelievable so far for #HarveysLaw this is for everyone out there who has ever Been a victim of online bullying. We WILL make the difference. Thankyou to all of the MPs and the select committee for backing this important campaign to me and my family- this is for you Harvey."

In a report published today, MPs have made a number of recommendations in regards to how disabled people can be better protected under the law. The BBC reported that these included giving disabled people the same protections under hate-crime laws as those who have been make the target of abuse due to their religion or race. In addition, MPs suggested that a similar check as the one used for child sex offenders should be created so that employers can see whether a person has previously been convicted of a disability-related hate crime.