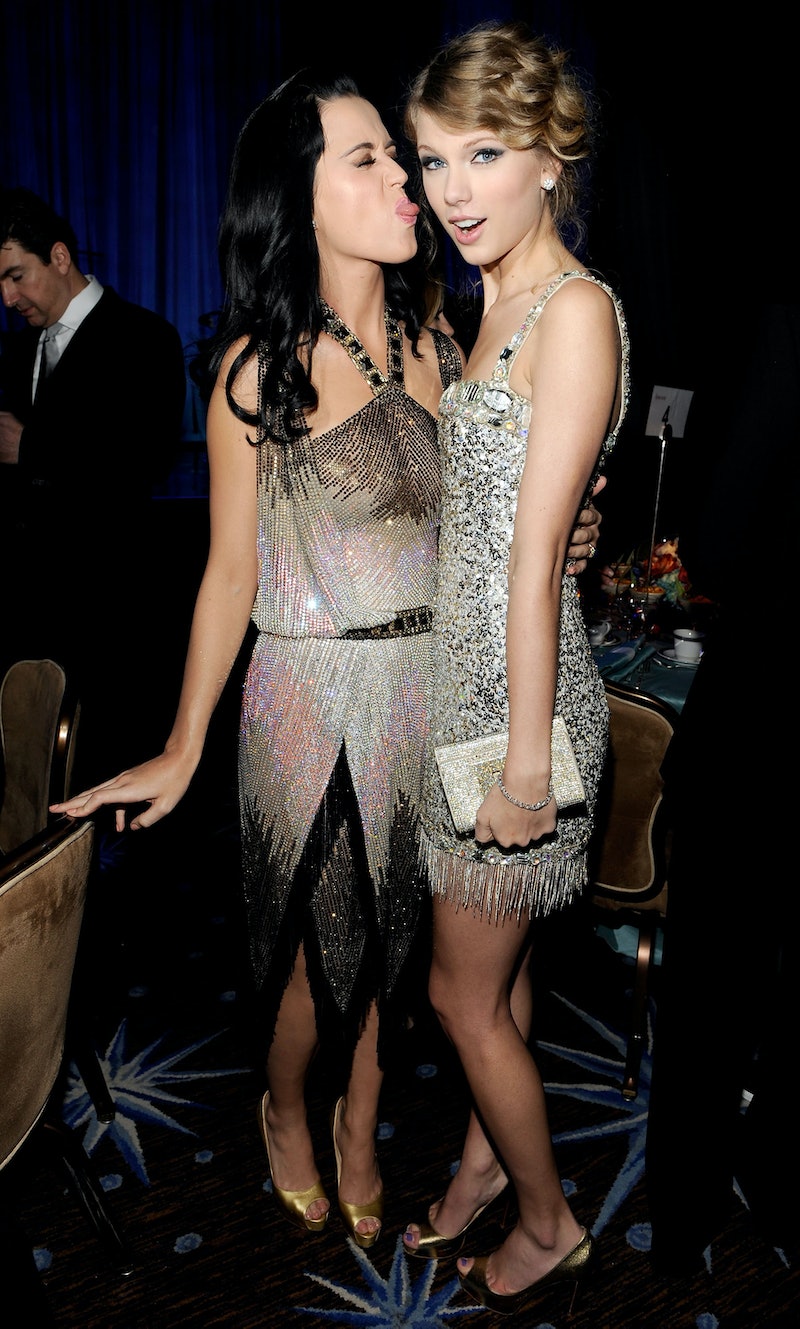 In June 2018, Katy Perry and Taylor Swift shocked the world when they united in Swift's award-winning "You Need to Calm Down" video, embracing in hilarious burger and fries costumes and officially putting an end to their years-long public feud. Now, Perry is opening up about why they decided to bury the hatchet. Katy Perry and Taylor Swift made up to set a good example for their young fans, as the singer said during an appearance on The Ellen DeGeneres Show on Wednesday, Sept. 18.

Perry told DeGeneres that they were inspired to make amends due to the enormous online tension between their most passionate fans, often known in the Twittersphere as "stans," who took sides during their public feud. “We have such big groups of people who like to follow us,” she explained, “and so they kinda started turning against each other a little bit, too, and it was really unfortunate.”

The online hatred between their fanbases was especially disheartening to Parry as both singers have an especially large amount of younger fans. “I’m all about redemption and forgiveness and for setting an example for those younger people, that it can be cool to ask for forgiveness, and confront someone that you may have an issue with or a problem with and talk it out."

The stars' path to a renewed friendship began when Perry sent Swift a literal olive branch as the superstar was kicking off her Reputation Stadium Tour in May of 2018. Swift was very receptive of the gesture and posted a video of the gift to her Instagram stories, captioning it "Thank you Katy," and telling fans, "So I just got to my dressing room and found this actual olive branch. This means so much to me."

After that, Perry told DeGeneres, she would go up to Swift and say "Hey, how are you?" whenever they were at the same event throughout the year. And given that, according to Perry, about "10 people in the world have as much in common as we do," their friendship naturally grew as they shared their experiences with each other. Their relationship built up to the point where Swift even baked cookies for the two at her house, as Perry famously posted on Instagram back in June 2018.

On the same day that Perry appeared on Ellen, Swift revealed that the two pop stars ended up bonding over astrology. "We were talking about how we’ve had miscommunications with people in the past, not even specifically with each other," she said. "She’s like, 'I’m a Scorpio. Scorpios just strike when they feel threatened.' And I was like, “Well, I’m an archer. We literally stand back, assess the situation, process how we feel about it, raise a bow, pull it back, and fire.' So it’s completely different ways of processing pain, confusion, misconception."

It seems that Swift and Perry are truly on their way to having a genuine and fulfilling friendship, setting a good example for everyone who attempted to tear either one of them down.