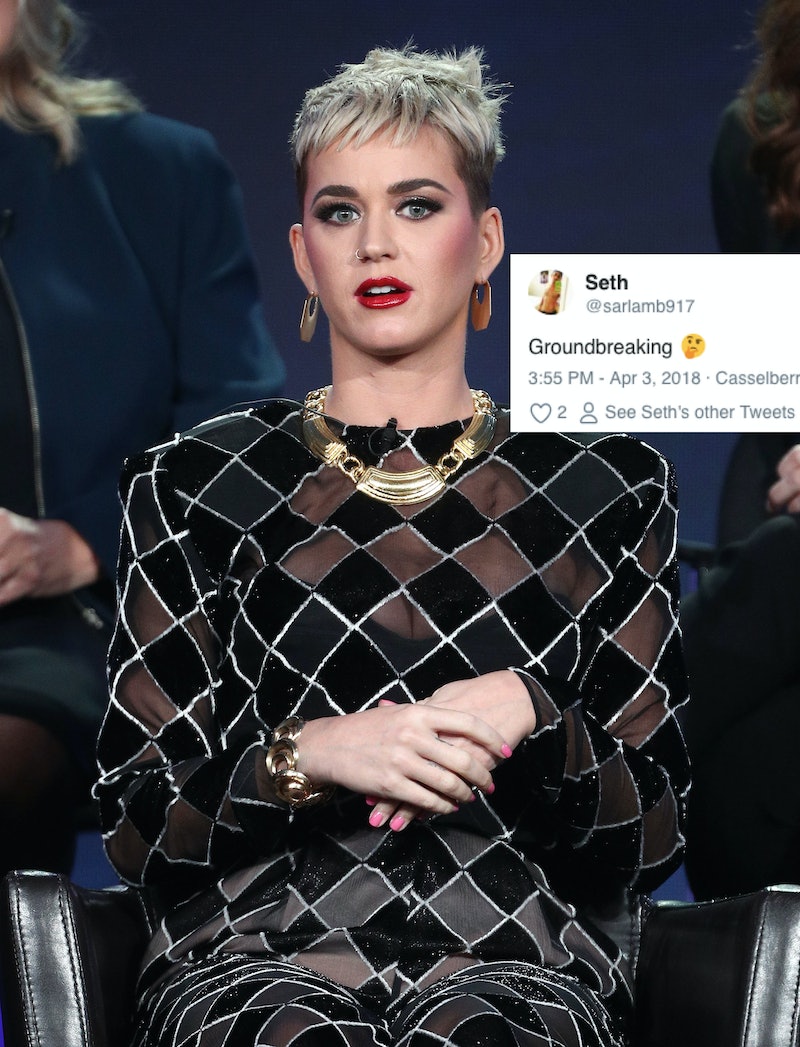 Katy Perry has been the subject of some serious ridicule on Twitter these last few days, ever since the American Idol judge's tweet about dealing with anxiety rubbed some fans the wrong way. On April 2, the singer posted about how she personally deals with feeling anxious, and since then, some Twitter users have been hating on Perry for tweeting about her anxiety remedy, as BuzzFeed notes.

Just before commencing a live-tweet of the evening's new American Idol episode, Perry took to Twitter to share a practice she uses as a means of dealing with "anxiety" — or, the version of it she experiences, anyway. Needless to say, the tweet sparked some controversy on Twitter, where fans who felt like Perry's comment was insensitive, trite, misguided, or all of the above, were quick to voice their upset. Perry wrote, "Whenever I feel any anxiety, I just breathe through my nose and out through my mouth."

After scrolling through Perry's string of tweets Monday evening, it seems plausible that the singer's tweet could have been directed at this year's batch of Idol contestants. Earlier Monday afternoon, Perry announced via Twitter that she would be live-tweeting the evening's particularly stressful Idol episode, which saw the judges make their picks for this season's Top 24. The episode was chock-full of knuckle-whitening eliminations (the pool of hopeful contenders narrowed by almost 50 percent), which Perry proceeded to tweet about for the duration of Tuesday night's show. With this context in mind, Perry's "anxiety" comment could have been more directed at any young hopefuls on the show who probably spent most of that day of filming biting their nails ahead of their high-stakes performances.

That being said, in lieu of any definitive context, Perry's tweet as a stand-alone statement definitely raised some red flags for many people. Because, as a pretty robust chunk of the star's 109 million Twitter followers pointed out in the tweet's comments, Perry's words (while clearly drawn only from her own personal experiences) came off to them as though she was giving advice and saying a breathing technique is some kind of cure-all to anxiety. In their responses to her tweet, Perry's followers called her out for what they felt was a gross over-simplification of the intrinsically grueling nature of an anxiety disorder.

Of course, folks who've struggled with anxiety disorders of their own know full-well that this isn't true. And those who have, and continue to, struggle are probably pretty sick of hearing people tell them to "just breathe" as if nobody ever tried that one before.

It's probably also worth noting here that "feeling anxious" and suffering from anxiety are not one and the same. A 2016 report by practicing neurosurgeon Dr. Sanjay Gupta for Everyday Health sums up the difference between the two pretty succinctly. The report notes that, while pretty much everyone experiences situational stress or worry sometimes (i.e. "I'm feeling anxious about my performance tonight; I've never sung in front of so many people before."), dealing with an actual anxiety disorder can be much more debilitating. The report quotes clinical psychiatry professor Charles Goodstein, MD, who said,

"What makes a disorder is when people have anxiety that mounts to such an intensity that they're no longer able to cope with it."

According to the Anxiety and Depression Association of America's website, an anxiety disorder differs from mild situational anxiety in that its symptoms (which include irritability, restlessness, muscle tension, and trouble concentrating) persist for inordinately lengthy amounts of time.

One of Perry's fans pointed out that the singer (who opened up about her own personal struggles with mental health last June, when she live-streamed a particularly candid therapy session) probably didn't mean anything malicious by her comment, since she didn't technically claim to suffer from an anxiety disorder, nor did she pretend to be all-knowing about the issue.

While Perry didn't at all seem to have ill intentions, it's certainly no secret that those who suffer from any iteration of a mental health disorder (anxiety, or otherwise) are often subjected to a whole lot of social stigma and that common misconceptions about mental illness usually only serve to perpetuate that. So, while Perry might not have realized initially, it seems the impact of her anxiety comment ranged from hurtful to downright offensive. Given how many comments she got, there's a good chance the Idol judge took note of the response for future reference.